If I Can Lock in Fixed Below My Floating Rate – Should I?

If you can lock in a long term fixed rate below your current floating rate – should you?

Punchline first – an inversion is usually the absolute worst time to lock in a fixed rate.  There was a notable exception in 1994, however (shameless teaser).

Since 1990, there have been five periods of inversions.  We’ve included 6 month averages of GDP and the Unemployment Rate heading into the inversion to resolve the question of “sure, but was the economy doing as well then as it is now?” 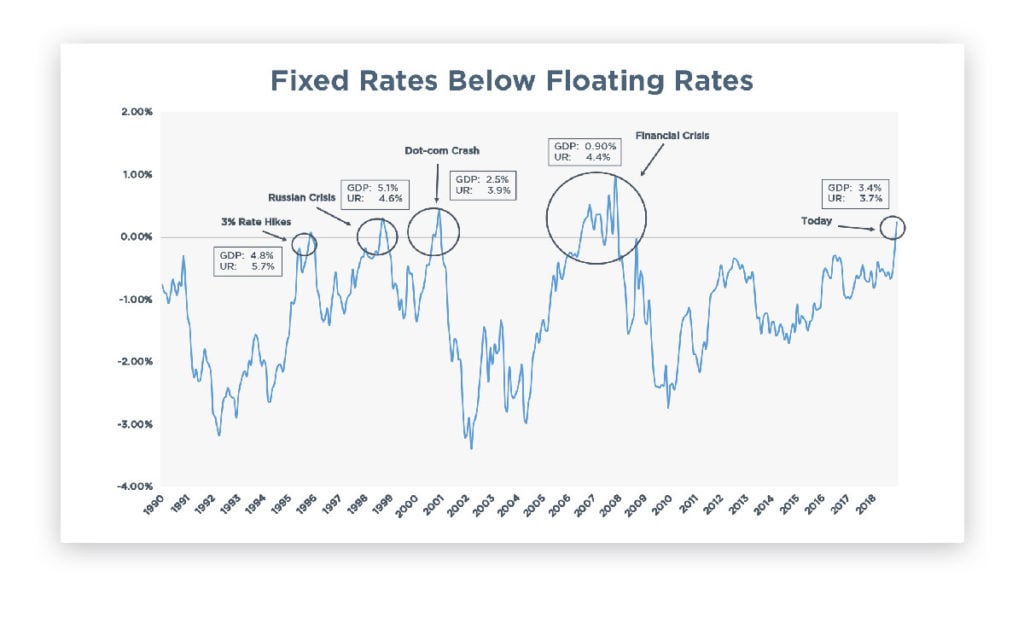 Hope you enjoyed that graph, because it’s going to be the last easy one of this presentation.  Let’s look at each one of those inversions individually.  We will explain the financial crisis inversion in detail, and then you can apply the same message to the other periods of inversion.

We selected five year fixed rates to serve as a good compromise between 3 year fixed and 10 year fixed.  The 10yr fixed was even more punitive than the 5 year, so no need to email us demanding to show those longer term scenarios.

From July 2006 until December 2007 (17 months), most borrowers could lock in a fixed rate below their floating rate.  Think about that for a second – for a year and a half borrowers locked in below floating. 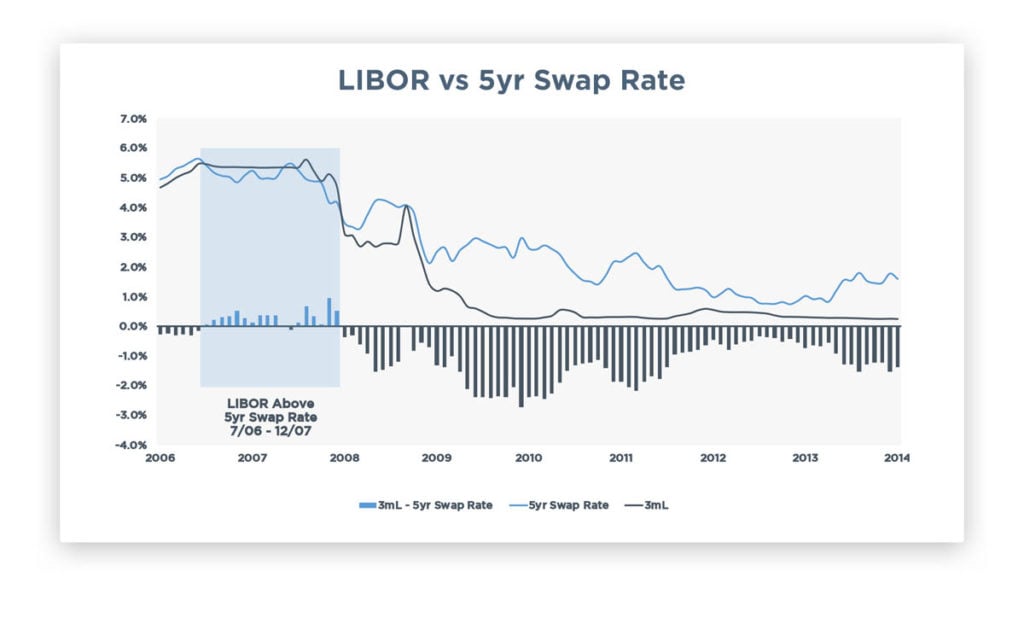 Let’s look at what happened if you locked in a fixed rate at 5.00% vs where you could have ended up floating for the next five years.  Lots of red.  Lots.  Of.  Red. 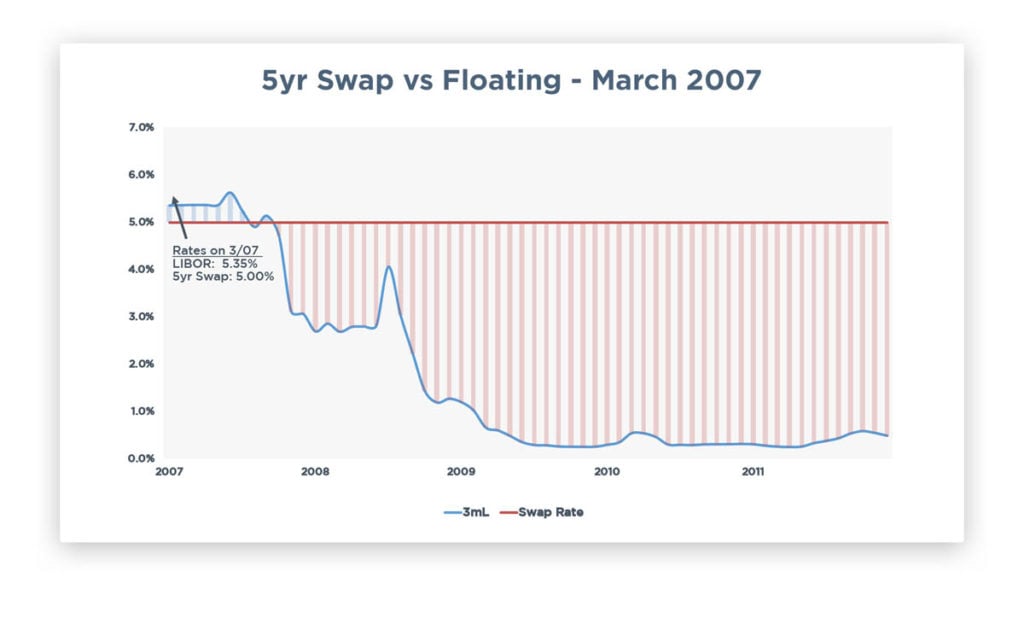 This graph takes some explaining – don’t skip ahead! 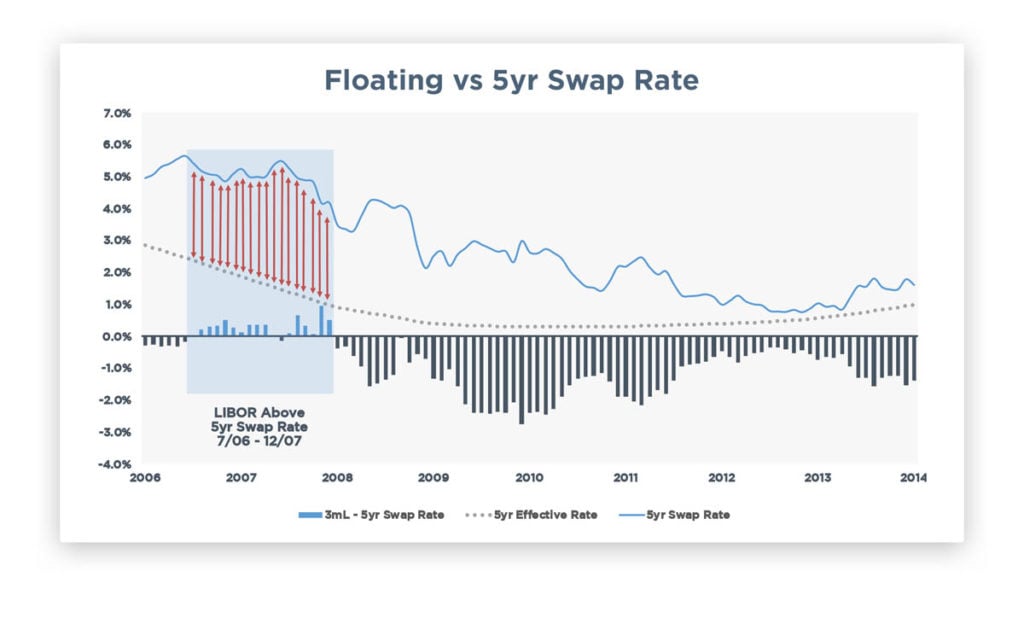 The next graph also takes some explaining.

Borrowers that locked during the inversion leading into the financial crisis overpaid by as much as 4% per year going forward.

We are all hopeful the financial crisis is a once-in-a-generation type of downturn, more severe than its predecessors.  Let’s take a look at how the other inversions worked.

The inversion only lasted six months and was not as steep as the 2007 inversion. 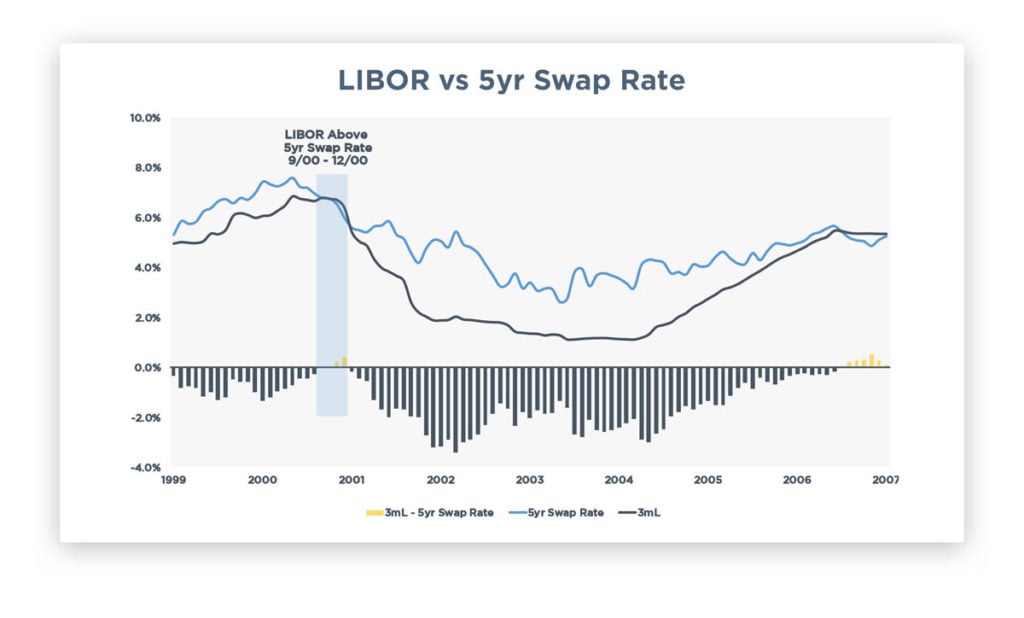 But a borrower that fixed still missed out on lower LIBOR in the subsequent years.  Here’s that fun graph with lots of red showing how much in savings borrowers missed out on.

If you locked in at the blue line during the inversion, follow the red arrows down to see what your effective rate for the remaining term would have been had you remained floating. 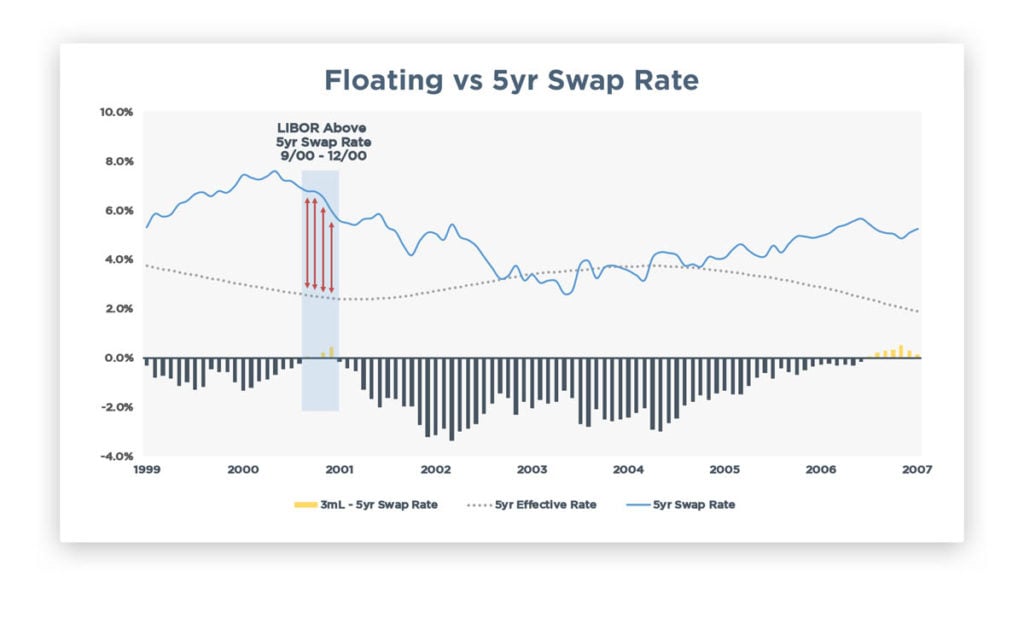 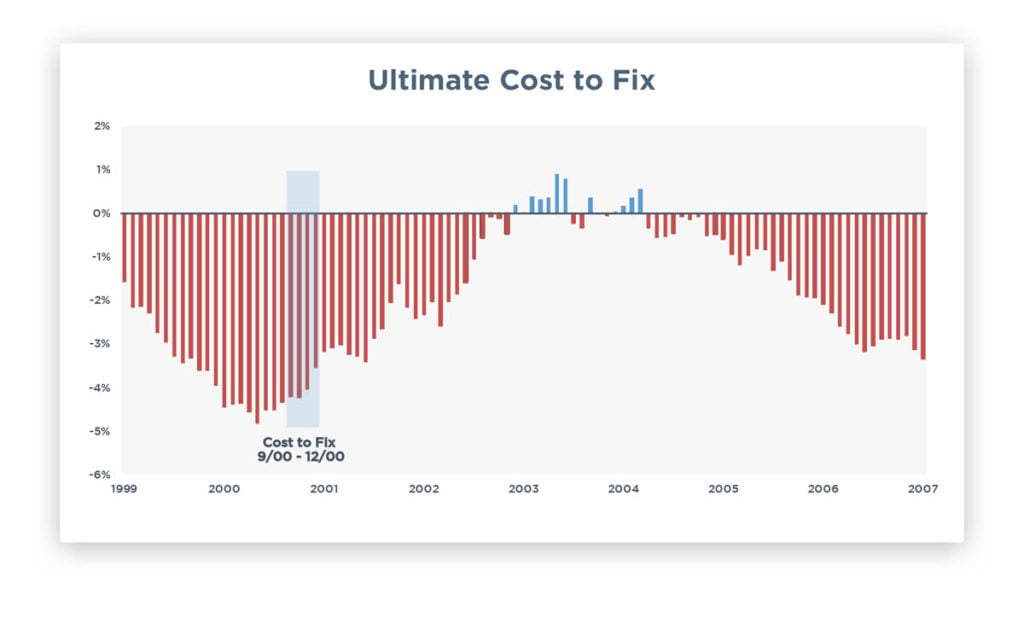 Three month inversion and relatively mild.  Additionally, it is challenging to draw conclusions because it leads right into the more severe dot-com inversion. 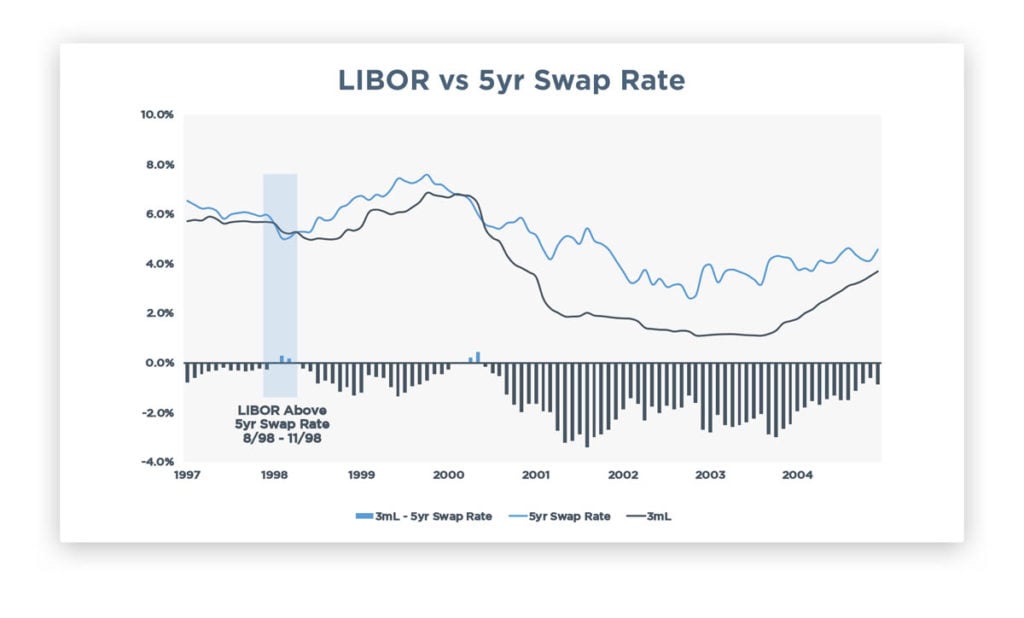 Not quite as punitive as previous inversions, but still a net loss for borrowers that fixed rates.

That being said, borrowers still would have been better off floating by about 1.00%.

The inversion wasn’t the worst time to lock because we rolled into the dot com inversion, which was more punitive. 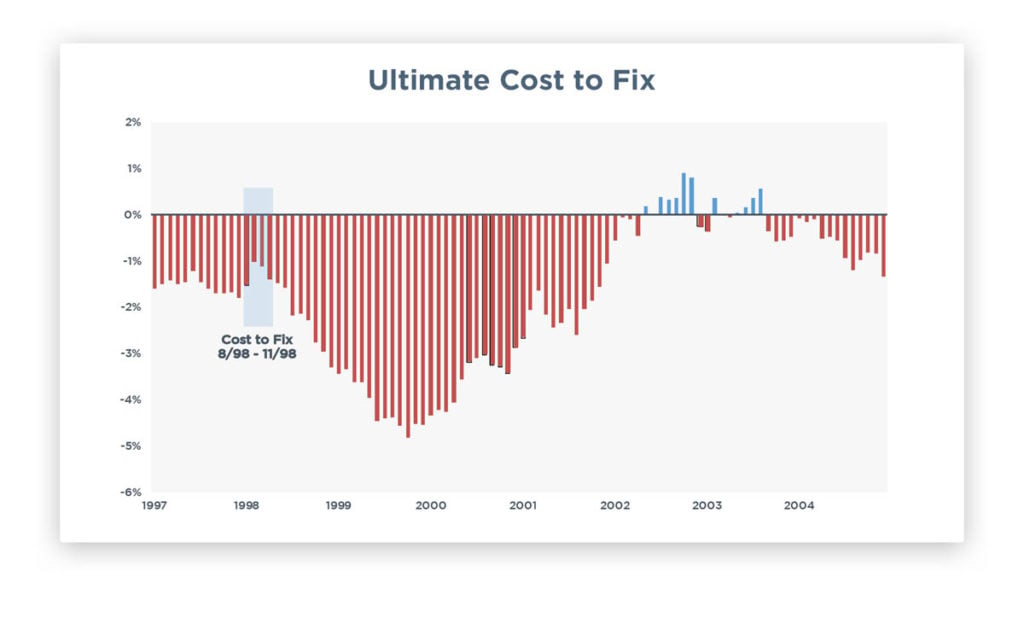 If you locked in during the inversion, here’s what your floating rate looked like over the next five years – basically breakeven. 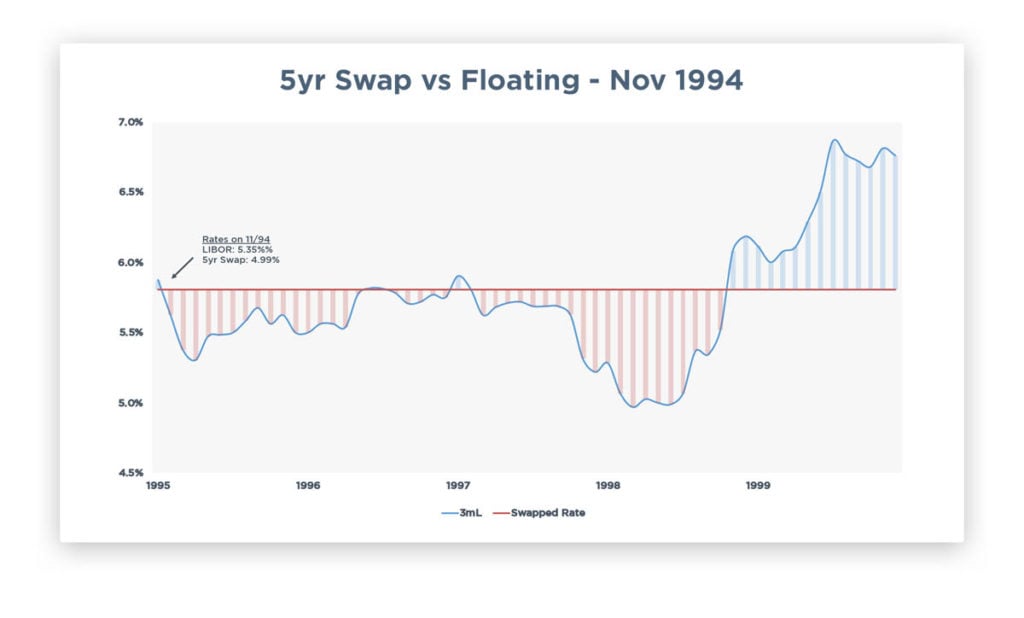 The brief one month inversion essentially resulted in rates that a borrower would have been indifferent between.  The swap rate and the ultimate effective rate ended up being the same. 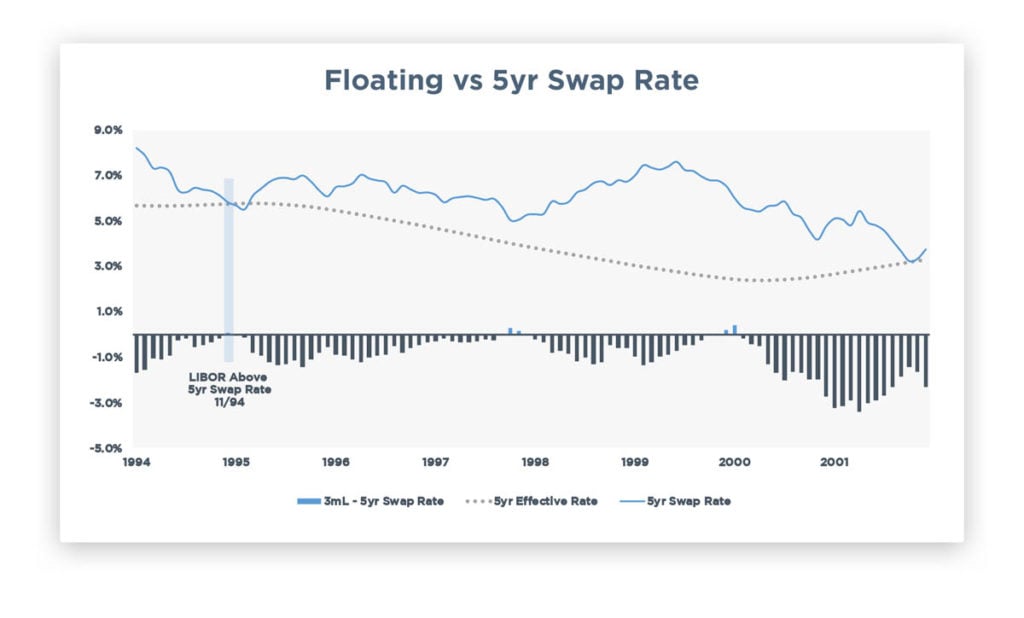 Because the Fed hiked so rapidly in such a short amount of time (3% in one year), the inversion actually wasn’t the worst time to lock. 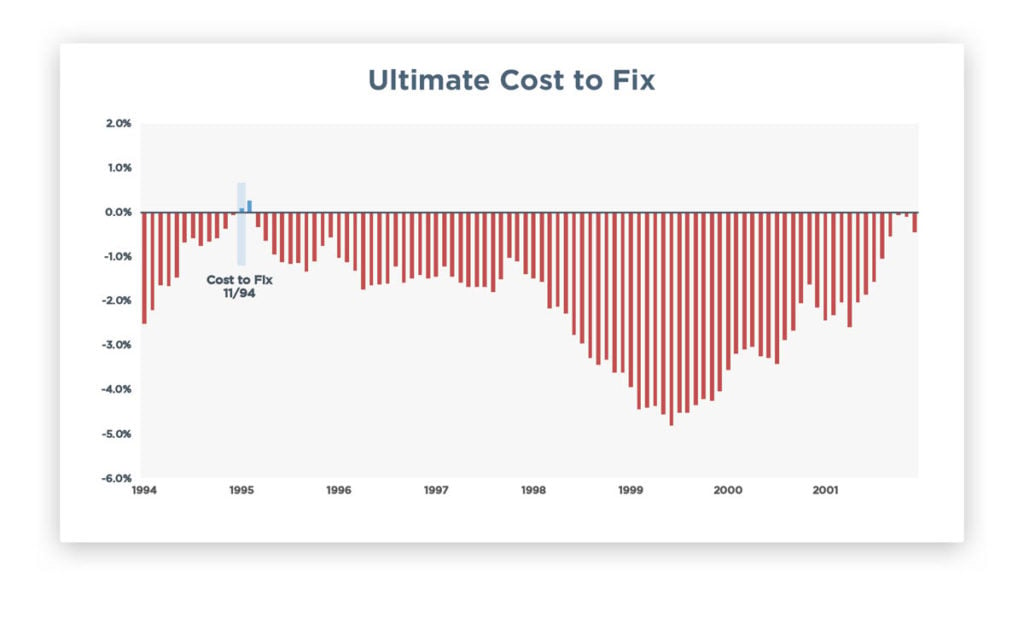 It’s important to note that while a borrower was no worse off fixing during the inversion of 1994, they weren’t really better off, either.

Therefore, is the best case scenario really just breaking even?

This is not a recommendation to avoid fixing a rate.  Each borrower and every situation is unique.  This is your risk, not ours.

Borrowers that plan on holding for 5-10 years and won’t be frustrated missing out on lower floating rates or a potential prepayment scenario won’t get an argument from us.

But before you pull the trigger on a “no brainer” fixed rate, carefully consider the historical track record of locking in during an inversion.