Many borrowers and lenders have become concerned with a shrinking pool of cap providers (CP’s), in many cases dwindling down to only one bidder: Sumitomo Mitsui Banking Corporation (SMBC).

The primary cause of this drop in bidding activity was the passing and implementation of Dodd-Frank (DF), creating a more burdensome pre-trade process.  Prior to DF, most banks could bid on a cap with only a few minutes notice. After DF, banks needed up to a week to complete the necessary pre-trade process.

This effort is worthwhile if the bank knows it will win the business; however, most caps are auctioned off to the lowest bidder.  That means each bank has to complete the process without any guarantee of winning the cap auction.

SMBC won most auctions, causing frustration among other banks.  Many of these banks have significant lending relationships and rely far more heavily on swap revenue rather than cap revenue.  They decided their time was better spent on those transactions than on cap auctions.

Some banks began only bidding on caps for existing relationships.  Others only bid if they were the lender on the financing for the cap being purchased.  Many other banks simply declined to participate.  Most banks have minimum thresholds and won’t sell any cap with a cost of less than $25,000.

Eventually, SMBC’s only consistent competition was the Commonwealth Bank of Australia (CBA).  CBA had entered the cap business by hiring employees from SMBC.  Like SMBC, CBA was willing to bid on caps without a relationship with the borrower.  They were also willing to complete the necessary DF pre-trade items to be included in the auction.

Then in July 2016, CBA was put on negative watch by S&P.  CBA changed its pricing to reflect the higher likelihood of a further downgrade, which could trigger clauses in caps requiring them to assign the cap to another cap provider that meets the rating requirements.  In the event this would happen, it would be at a significant cost to themselves.  CBA also began passing on cap auctions with higher rating requirements.

The CBA downgrade also negatively affected SMBC’s pricing. Until then, CBA was the most likely candidate for an assignment of a cap in the future if SMBC was downgraded.  With CBA no longer qualified under most rating requirements, SMBC had to price in the cost that a bank like Wells Fargo may be the only suitable replacement Cap Provider.  If Wells knows it is the only bank that qualifies, they have the ability to charge SMBC a substantial amount for the transfer.

CBA has halted and resumed trading several times over the past few years but officially exited the cap business in mid-2021.  They will continue to service their existing portfolio of trades until it winds down but will not be entering into new caps.

Because cures have a cost to implement, it’s important to consider these along with the actual ratings. Some CP’s will charge less if they can post collateral rather than being required to find a replacement provider.  Not only does this alleviate the ratings risk cost, but mitigates concentration risk to any one counterparty. Since the CP’s obligations are collateralized, the lender and borrower have a greater chance of mitigating losses in the event of default by the CP.

Another benefit to posting collateral is greater protection in the event of widespread banking downgrades like those experienced in 2008. The current ISDA rules indicate that if the CP is downgraded and there are no CP’s that meet those rating requirements, the cap is terminated.  The remaining value will be returned to the borrower.  Presumably, the lender will revise its rating requirements at that time; however, there is likely to be even fewer banks willing to price caps in that environment and a borrower could be exposed to significantly higher cap costs.

Some lenders have utilized a tiered collateral posting structure in an attempt to balance the risk and costs.

Not all banks will agree to post collateral.  CBA, for example, had Australian regulatory requirements that made posting collateral prohibitive on loans that are securitized or may be securitized.  Alternatively, in some cases SMBC will offer more aggressive pricing on a collateral posting requirement than on a replacement only requirement.

It is possible to include both as options and allow each potential CP to indicate a preference.

Dodd-Frank has increased the effort required to bid on a cap.  Many banks decided it was not worth the effort if the cap was likely to be won by SMBC.

Even if a bank meets the rating requirements, it may elect to not participate in an auction.

Currently the most common providers are SMBC, Wells, Goldman, BoNY, and US Bank.  While CBA has left the space, other banks have stepped in to fill the void for the time being. 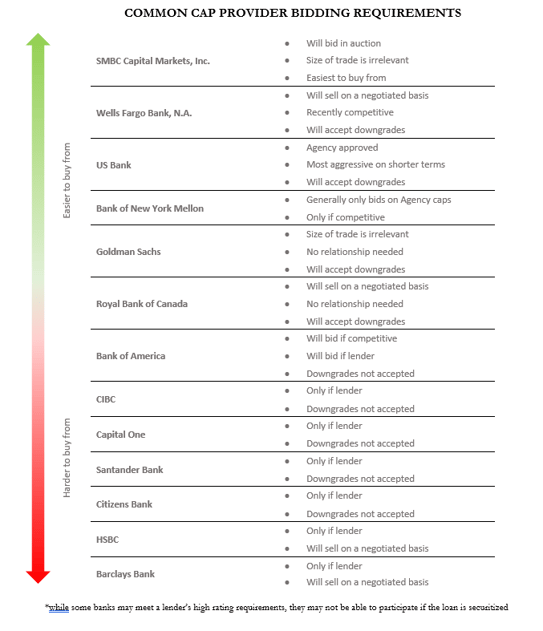