Like the Fed, I’m way behind the curve on a lot of things.  Recently, the wife and I decided we needed to invest some time into the series Breaking Bad.  Neither of us had seen it and everyone we know said it was one of the best shows around.  By the end of season one, we had become acutely aware of an uncomfortable trend – we hated every single female character.  Without exception.  And for very minor flaws, especially relative to the male character flaws.  We were rooting for Skyler’s demise because…she was untrusting, nagging, and whiny?  Her husband is manufacturing meth and killing people and we’re all like, “Why does she always make it about herself?  Why can’t she be more understanding that he’s going through a lot?”  He’s a drug dealer!  Jane quickly turned into a conniving you know what, intent on stealing Jesse’s money and ruining his life. Meanwhile, she had been clean for 18 months and he was the reason she relapsed!  And we were glad she was gone!  Furthermore, he’s totally inept yo!  I can’t root for a character that doesn’t respect his profession enough to do it well, but we found ourselves saying, “He’s a good guy, just in over his head.”  Gretchen stole Walt’s partner and company and disgustingly offers to pay for Walt’s medical treatment…why would she insult him like that?.  Skyler’s sister only wears purple and is a recovering shoplifter and yet somehow that’s worse than Walt running people over with his car…because he’s doing it for his family!  Jesse’s mom turns her back on him when he comes to her for help.  The list goes on and on and on…are we the only ones that notice this?  The men are sympathetic criminals and the women are the ones breaking bad?  Does this say more about the creator or more about me?  Am I the one that’s breaking bad?  Who knew that the character dealing meth would require the least amount of moral introspection?

Too Soon To Discuss Next Fed Easing Cycle?

FOMC doves are finally starting to use the possible yield curve inversion as a justification to slow the pace of hikes.  The hawks are still ignoring the warning signs, however.

This is especially critical if you believe the economy will be slowing over the next two years, as many economists are forecasting.

But first, GDP has to peak – and Q2 may very well be that peak.  Friday brings the first advance estimate and there’s a chance GDP will register 4.00%.  There will be headlines and tweets.  Celebrations.

If the Fed fails to hike as much as they want (you’ll recall we keep suggesting the Fed will struggle to hike beyond 2.50%-2.75% vs the 3.25% it is forecasting), then perhaps balance sheet normalization will also struggle to maintain its current pace of $50B/month?

Before the Fed starts cutting rates, it will simply stop hiking them.

But perhaps the Fed will pause reverse QE, too, as part of that process?

Paradoxically, these sort of signals may help steepen the curve.  “The Fed isn’t overdoing it!”  Risk on!

The longer we go without news of compromise, the greater the odds this ends poorly.  We don’t think Trump will blink unless his ratings take a hit, which is likely only going to happen if the tariffs leads to an economic downturn.  Given that we just said Q2 is likely to represent the peak of US GDP this cycle, that meaningful downturn is likely 12-24 months away.  In other words, the impact of the tariffs may not be felt immediately and therefore Trump will not alter his stance before the longer lasting damage is done.

A common thread among all three scenarios is the upside risk to inflation in the near term.  Populist governments, protectionist policies, and gapping budget deficits that require massive Treasury issuance all set the stage for higher prices (inflation) in the near term…until demand softens from those higher prices.

FOMC and the Yield Curve

Powell spoke to Congress last week, and was asked, ““Does a dramatic change in the shape of the yield curve in any way influence the trajectory you guys are on with respect to normalizing interest rates and the balance sheet?”

No.  “I think what really matters is what the neutral rate of interest is,” Powell said.

“In other words,” Powell continued, “if you raise short-term rates higher than long-term rates then maybe you’re policy is tighter than you think, or it’s tight anyway. I think the shape of the curve is something we’ve talked about quite a lot. Different people think about it in different ways, some people think about it more than others. I think about it as really the question being what is the message from the longer-run rate about the neutral rate.”

While I continue to be amazed at Powell’s total disregard for an inverted curve, these comments do suggest the Fed is taking cues from the yield curve and we are approaching the neutral rate.

Any suggestion about the end of the tightening cycle would likely be welcomed by the market and cause long-end yields to climb.  But we don’t expect that to happen.

Powell is decidedly hawkish on the economy, dismissive of an inverted yield curve, and expects inflation to keep climbing.  Like Trump, Powell may not change course until actual events dictate.  For example, a stock market correction could force his hand.  We think those pressures will mount over the next 9 months and the Fed will struggle to hit its 3.25% target, but Powell’s conviction in his view may override that. 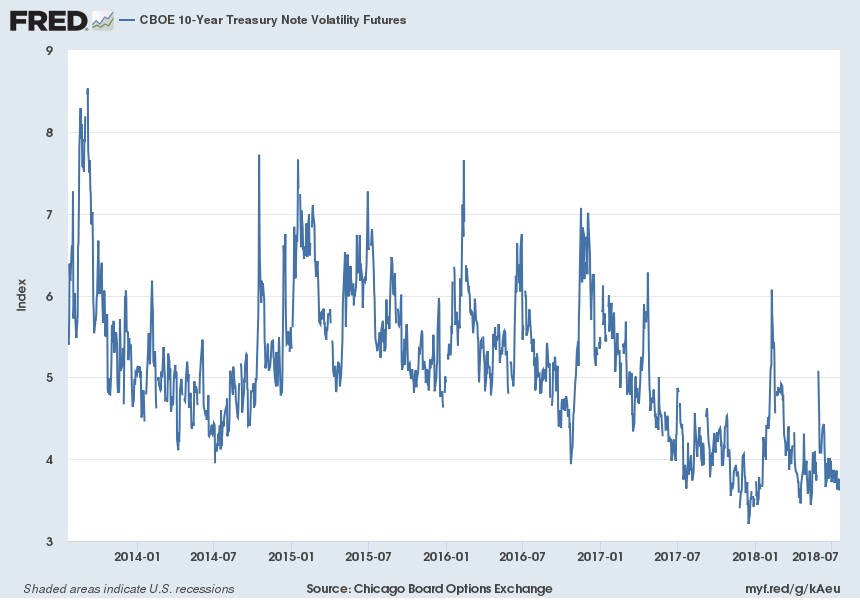 Which comes at a time when Treasury shorts are at all time highs. 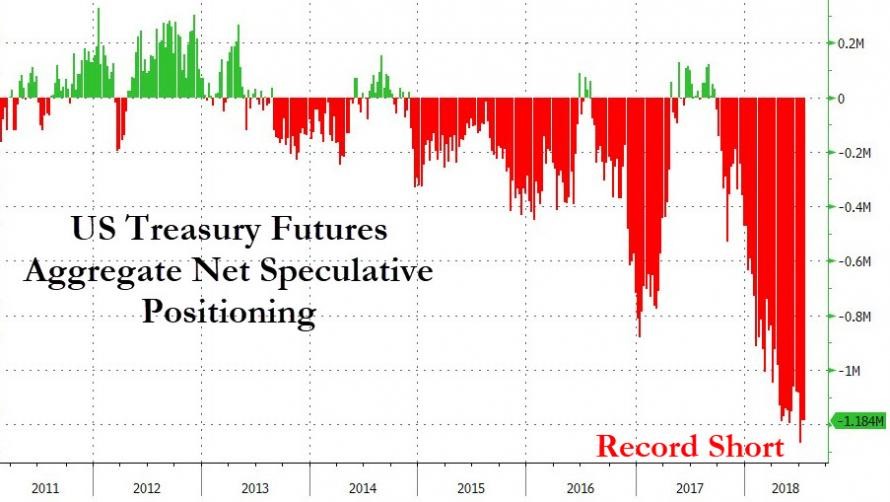 And the 10 year Treasury yield is trading within an exceptionally tight band.  In fact, the current band of 9bps would have been even narrower had the 10yr jumped Friday afternoon by 5bps.

Now, I don’t know what all that means…but maybe the 10 year Treasury is…wait for it…almost there…your patience will be rewarded…promise…breaking bad.

It doesn’t get much more heavy handed than that, does it?