I know you’re devastated, but this week’s newsletter will be like my youngest’s books – lots of pretty pictures because I am too lazy to write a lot in the way of story.  Also, I am writing this on Friday because there is no chance I am able to focus this weekend…

The economy added 200k jobs last month, above the consensus forecast of 180k.  This is the 88th straight month of gains, the longest streak on record.

The unemployment rate held steady at 4.1% for the fourth consecutive month.

The previous two months were revised downward by a net 24k.

The Fed increased its inflation forecast for 2018 even though Core PCE came out Monday at 1.50% again.  In the statement from Yellen’s last meeting as Chair, the Fed noted that it expects inflation to hit 2.0% this year and climb above 2.0% in 2019.

While we can argue with the Fed until we are blue in the face (because Core PCE hasn’t hit 2.00% in six years), the belief that inflation could hit 2.0% could cause the Fed to hike faster than expected.

Obviously, if inflation actually does start to increase, faster rate hikes would certainly become a possibility.  Throw in sub-4.0% unemployment rate and the Fed would have plenty of reasons to keep hiking.

The market has a 92% probability of a hike priced into the March meeting and is finally in line with the Fed by pricing in three hikes this year.

The Fed-speak will cause some rumblings about four hikes.  We still doubt this, but can’t ignore the Fed’s surprisingly hawkish language, either.  Presumably, Yellen and Powell carefully crafted the language together to ensure a smooth transition and Powell must have wanted to convey those feelings.

This also increases the risks of an inverted yield curve.  As we have been noting, we did not expect an inverted curve in the first half of this year.  Too much optimism, too much strong data, tax cuts, less regulation, etc.  Very little reason for the T10 to fall in the near term.

BUT, if the Fed hikes opportunistically like it did post-election, it could be setting the stage for an inversion later.  Assume for the moment that the T10 goes to 3.00%.  With the T2 at 2.15%, the steepness would be 0.85%.  Now imagine that…

In other words, the Fed overreacts and hikes aggressively…but gets away with it while the T10 is at 3.00%.

But then something changes and the T10 falls.

Of course, this assumes the Fed hikes that aggressively AND the T10 falls.  But it doesn’t feel like a completely unreasonable outcome.  We just think its more likely to happen late 2018 or 2019 than in the first half of the year.

The temporary government shut down was the catalyst to break 2.62%, and the ongoing positive data has provided the cover fire necessary to continue the march toward 3.00%. 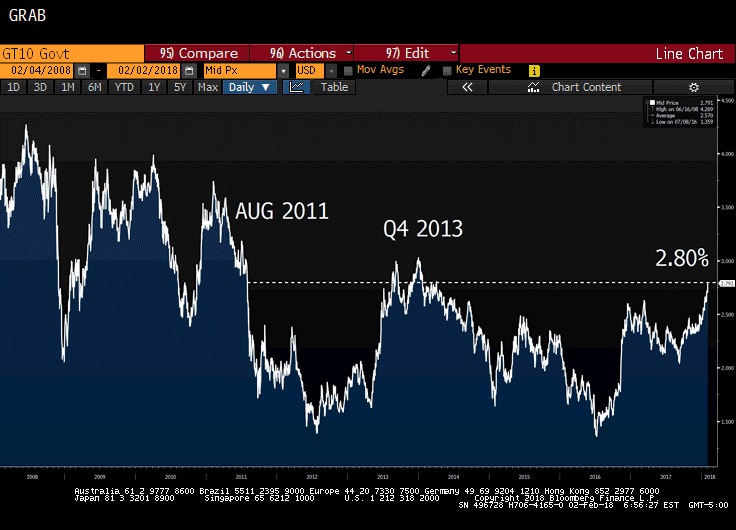 This suggests plenty of room left to run.

The Bund is continuing to climb as well as the Eurozone recovery strengthens.  Recent forecasts have been revised GDP forecasts for 2018 above 2.50%.

The Bund hit its highest level since Q3 2015.  Every tick higher gives the 10 year Treasury rope to move higher, as well.

5 year German rates turned positive for the first time in over two years.

Heck, even Japan is starting to see signs that deflation might finally be ending. 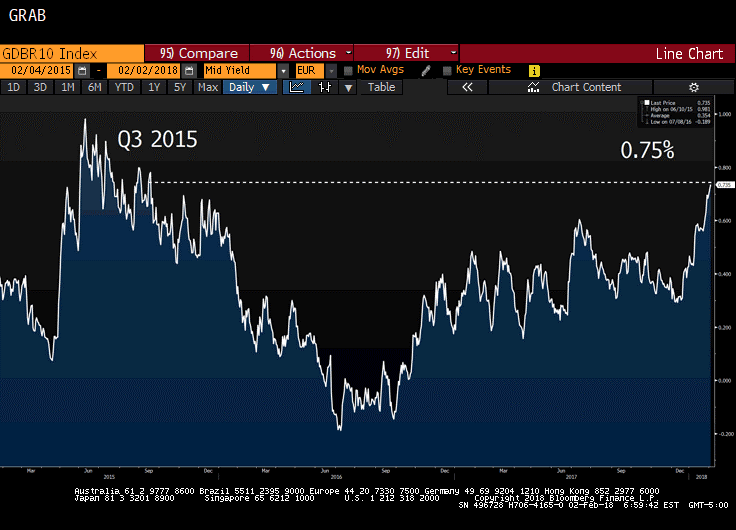 The 2T continues to set decade highs, particularly with the hawkish Fed language.  We wrote last week that we thought it could still climb to 2.35% (it was 2.10% at the time) unless the Fed softened its rhetoric.

With that looking less likely, the 2T climbed to 2.16% and still has room to move up from here.

If you buy interest rate caps, you care far more about the movement of the T2 than you do the T10.

Caps are getting pricey and volatility has spiked so dramatically that the cost is being driven by uncertainty rather than anticipated protection. 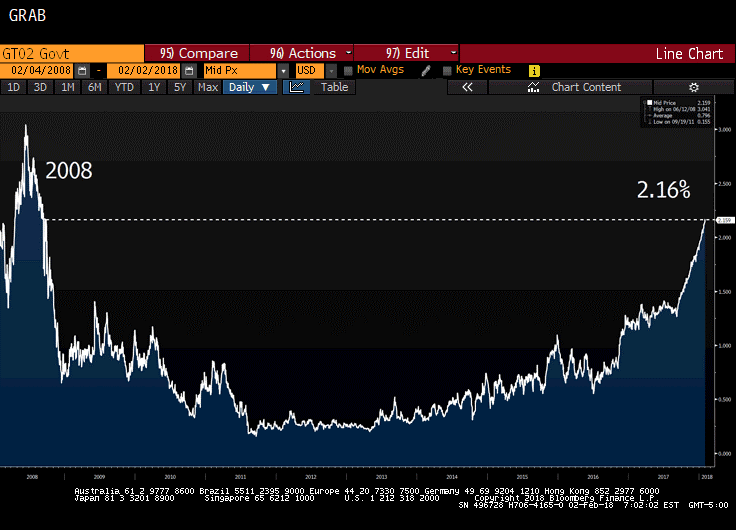 Relatively quiet week on the data front, although it doesn’t take much these days to keep volatility in full swing.  Just as importantly, numerous Fed speeches headlined by voting members John Williams and William Dudley on Wednesday.   Bullard, Evans, and Esther also speak this week.  The market will be closely monitoring for hints on whether it interpreted last week’s FOMC statement correctly.

Keep an eye on stocks, as a sell-off could be the only thing preventing a continued march higher by rates in the near term.