How about a huge shout-out to Houston for showing a divided nation how to pull together?  And that Cajun Navy?  Best thing to come out of Louisiana since LSU consistently owned Bama.

The hurricane should help decrease the likelihood of a government shutdown.  Goldman Sachs two weeks ago predicted a shutdown with 50% odds, but has since reduced that to 15%.  It seems inconceivable that the government would shut down when Texas is in need of so much help.

Texas has reminded us that we are better united than divided.  Take heed Congress.

The economy added 154k jobs last month, below the 180k consensus forecasted and the slowest pace in three months.  The previous two month’s reports were revised lower by a combined 41k.

The three month average is still 185k, which is what the Fed will likely focus on.   Furthermore, most economists suggest 100k per month job growth is needed to absorb the expanding workforce, so anything about that is technically gravy, particularly with such low unemployment.

Furthermore, August has more adjustment than any other month.  Since 2011, August has averaged a revision upward of 61k jobs.  If that trend holds when the data is released next month, that should unwind some of the negativity around Friday’s report.

The unemployment rate also disappointed, rising from 4.3% to 4.4% despite the participation rate remaining unchanged (62.9%).  This was the result of the number of Americans not in the labor force growing by 128k to 94.785mm.

From the BLS, “Hurricane Harvey had no discernable effect on the employment and unemployment data for August.”  That will likely change next month.

Takeaway – another reasonably strong number, not gangbusters but certainly not recessionary.  If anything, hiring remains strong (although quality of jobs is questionable) while wage growth lags.  It was not weak enough for the 10 year Treasury to break the all-important 2.13% support level.  If 2.13% fails to hold, we will have a 1.99% 10 year Treasury in short order.

This divergence also creates a dilemma for the Fed because inflation is unlikely to show up if wages are stagnant.  Even more challenging for the Fed when we consider that GDP for Q2 came in at 3%, the strongest quarter in more than two years, while ISM Manufacturing had its strongest print since April 2011.

The Cleveland Fed releases a graph quarterly that incorporates seven mathematical formulas in an attempt to forecast Fed Funds (https://www.clevelandfed.org/our-research/indicators-and-data/simple-monetary-policy-rules.aspx).  As you can see in the graph below, the maximum Fed Funds rate at the end of 2019 is 3.00%, while the median is about 2.25%.

Interestingly enough, the minimum is – 1.00%.  I guess negative interest rates aren’t entirely off the table just yet…

We think the baseline is probably what they call the 25th percentile, which puts Fed Funds around 1.75% through mid-2019. 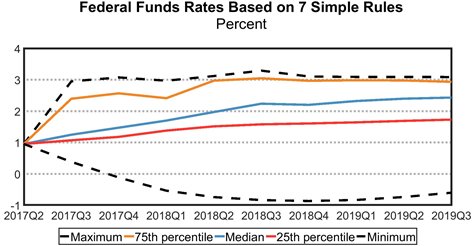 Whether the Fed hikes in December or early next year or more than a year from now, the consensus is very much for a muted path higher.  Further complicating matters is that pesky Core PCE, the Fed’s preferred measure of inflation, which came in last week at just 1.4%.  Here’s a quick snapshot of recent Core PCE readings.  Just screaming for a bunch of rate hikes…

In fact, the last time Core PCE exceeded 2.0% was April 2012, in a simpler time when RGIII was winning the Heisman and Baylor wasn’t losing to Liberty…

PIMCO released a report about the New Neutral Rate, which they estimate is just above 1.00% – exactly where we are today.

“In summary, U.S. rates are low but fair in the New Neutral context. Accounting for the low-rate environment, U.S. equity valuations are slightly rich relative to history, with credit spreads trending even richer. Globally we see similar forces driving low-rate environments in developed markets, though we see greater pockets of value in non-U.S. equity markets and select credit sectors. Overall, the result of lower rates and tighter risk premia across most markets means lower forward-looking returns.”

And if we still haven’t convinced you that the Fed isn’t hiking at the September 19/20 meeting, consider that the meeting is taking place about 10 days before the Treasury is supposed to run out of money…not an ideal time to tighten financial conditions

The ECB meets Thursday and has markets on edge more than usual.  Inflation in the Eurozone has picked up more quickly than forecasted, with consumer prices up 1.5% in August after a 1.3% increase in July. 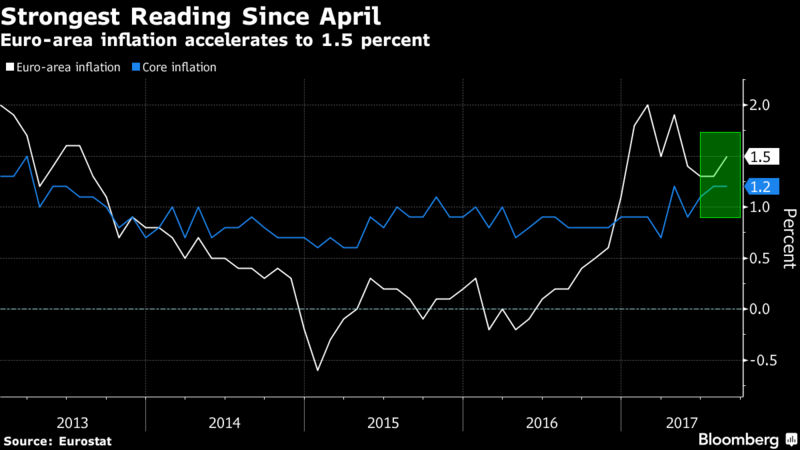 The ECB’s QE program is set to expire at year end and Draghi is running out of time to announce plans for 2018 and beyond.  The recent uptick in data has markets worried that Draghi may surprise with a more aggressive tapering program (recall the Taper Tantrum here in May 2013).

We view this as a very low likelihood.  At Jackson Hole, Draghi said “a significant degree of monetary accommodation” is still warranted.  And having learned lessons from observing the Fed, Draghi knows a misstep could wreak havoc on a fragile recovery.

More likely, we expect Draghi to float a test balloon without formally committing to a tapering strategy.  This will give him a month of market feedback before he more formally announces plans at the October ECB meeting.  He may suggest the end of the easing bias while simultaneously suggesting that monetary conditions will remain highly accommodative for a prolonged period of time.

But if Draghi catches markets by surprise with hints of a faster than anticipated tapering to QE, we could see a spike in German Bunds.  The bund, trading at 36bs currently, may run back up to 60bps +, giving the 10 year Treasury room to run higher as well.

Again, we view this as a low likelihood for this week, but the ECB tapering program remains one of the greatest threats to the 10yr Treasury yield.

Despite some upward pressure on yields in the Eurozone, JPM reported last week that the global value of sovereign debt trading with a negative yield is $7.4 trillion, up from the low of $4.6 trillion at the start of the year. 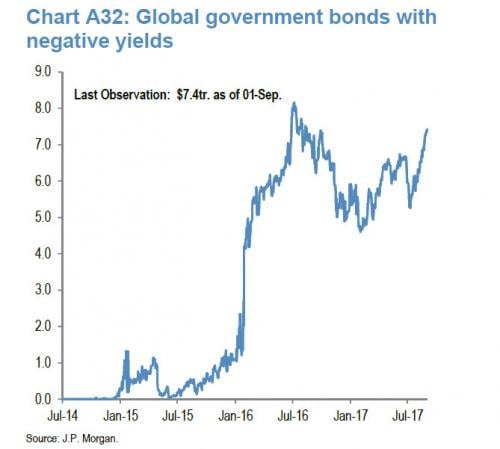 A staggering 62%, or $4.6 trillion, of all negative yielding debt is Japanese government bonds, despite the fact that Japan has twice in the last month reduced the amount of debt it purchases in the open market.

Another $2.8 trillion are Eurozone bonds, and more than half of that is just Germany and France.

Henceforth, we shall refer to all negative yielding bonds as “Charlie Strong Bonds”.  The name sounds cool, the bonds look good from a distance, but you are going to lose money if you invest in them.

So Maybe the Government Won’t Shut Down Over the Wall?

Trump has been calling for a government shutdown since May if funding for construction of the wall is not included in the Mexican budget.  If reports from Friday are to be believed, he is again softening that stance, probably after Cohn and Mnuchin explained the ramifications.

My initial reaction was that Democrats would rejoice, gaining confidence that Trump was more bark than bite.  But perhaps Republicans really have the most to gain from this development. McConnell and Ryan don’t care about building a wall, so perhaps this will allow them to focus on the important, classic Republican, agenda items.

Just as importantly, how are moves like this interpreted around the globe? Trump tweeted over the weekend that the US could stop all trade with countries that trade with N Korea.  That was clearly a shot at China – will Trump really follow through on that or is that just another wall-like threat?  Squeezing China is probably the US’s best bet for reining in N Korea – can Trump convince President Xi that the sanctions would be real or would Xi just interpret those tweets as more empty threats like a government shut down over the wall?

Does North Korea interpret the flip flopping on the wall as weakness, or just the difference between Campaign Trump and President Trump?  Hopefully Kim Jong un recognizes that Trump has surrounded himself with war-hardened generals. I recall a Drill Sergeant in Basic Training imparting life lessons on us in a not so gentle voice, “Threats are a sign of weakness, otherwise you would just do it.  I’m not worried about the guy barking about how he’s going to shoot me, I’m worried about the guy that just starts shooting.

I am certain Mattis believes the same.  A four star general cautioning of a “massive military response” is about as much as a Marine will ever bark.  That was not the same as Trump threatening a shutdown over $1.6B in funding for a wall.  Remember, the Obama administration soured on Mattis because they felt he was too eager for military conflict in the Middle East, particularly Iran.

Marines are not known for their shyness about conflict…and Trump’s Chief of Staff is another four star Marine general.  Which leads us to…

The Not F*cking Around Crew

Trump respects and listens to two types of people: military and peers.

Kelly and Mattis fit the military bill.  He won’t steamroll them and make an impulsive decision that involves actual military strikes.  They won’t allow it.  They appreciate the sacrifice and won’t make any decisions to put their lives at risk casually.

Gary Cohn and Steve Mnuchin are peers, mostly because they are wealthy.  He will likely listen to them and pull back from full-on trade wars with China, avoid a shutdown, etc.  This is particularly true with Bannon gone.

One of the only good Ben Affleck movies since Good Will Hunting was 2010’s The Town.  It’s about a Boston bank robbery crew that is very sophisticated and precise, frustrating police repeatedly.  After a narrow escape, the chief detective of their case is losing his temper and berates his team, “This is the not f*cking around crew.”

They are the stabilizing forces in an otherwise unstable WH.  Cohn/Mnuchin provide comfort to the markets that pro-business agenda is a priority.  Kelly/Mattis provide comfort that military decisions are being made by the right people.  Mattis making that statement Friday was like the big brother standing behind the little brother, punching his hands into his fist.  The signal was clear.  With these four at the helm, markets feel as confident as they can given the circumstances.

This crew, from a market standpoint, has a downside, however.  Two weeks ago we cautioned that Gary Cohn and General Kelly are the canaries in the coal mine.  If either leave the administration, the markets will react negatively.  Odds of Cohn becoming the next Fed Chair have been steadily dropping since Charlottesville, down from 40% to 20%.  Cohn has publicly stated that he has wrestled with the decision about whether to remain on the staff, but believes he has a once in a generation opportunity to enact substantive reform, particularly tax reform.  Should that stall, the odds increase that Cohn will depart.  Stocks and rates would likely fall.

The possibility of military strikes in N Korea are not necessarily higher because of Kelly/Mattis – do not mistake aggressiveness with impulsiveness.  Both are known as intellectuals and have a firm grasp on the significance of putting American lives at risk.

But if N Korea missteps and directly threatens the US, I can see Kelly walking into Mattis’s office, “I need your help.  I can’t tell you what it is, you can never ask me about it later, and we’re gonna hurt some people.”

Mattis: “Whose Blackhawk we gonna take?”

Seven Fed speakers this week, headlined by NY Fed President Dudley.  Dudley is considered a centrist and an indicator of Fed sentiment behind closed doors.  In recent comments, he has expressed a belief that GDP will be 2.0% (slightly above other members), inflation to move towards 2.0% (a fading consensus), and one more hike this year in December (another fading consensus).  His comments this week, if more dovish than recently, probably confirm a shift of the greater FOMC as well.   The ECB meets Thursday and has markets on edge.  Oh yeah, so does North Korea.