Although we didn’t quite get to the BofA forecast of 11%, stimmy-backed spending drove a 9.8% increase – the second highest on record.  This was far north of the consensus 6.5% forecast.

The following discretionary spending gains highlight that not all the stimulus money went to paying for basics, like food and shelter:

The real reason Retail Sales is such a closely watched data point right now is that consumer spending comprises 2/3rds of GDP.  Q1 will be released at the end of this month and is likely to come in around 6.0%…and it may be another six months before we have a single-digit GDP print.  In fact, if Q2 comes in below 10%, it’s probably only because the stimmy pulled forward spending into Q1.

Consensus forecast for Q1 GDP is about 5.4%, while Q2 is about 8.1%.  It certainly appears as though we will blow through those numbers, and I don’t think it can all be attributed to stimulus spending.  The economy is normalizing very quickly and things will be going gang busters for a while.

CPI came in at 2.6%, the highest level since August 2018, but well below the surge experienced after the financial crisis.

The market is already pricing in 2.5% CPI for the next five years.  This means expectations would have to shift higher for rates to feel upward pressure.

Conversely, if inflation fails to meet those expectations (which is has done consistently over the last twenty years), the market will need to back that out of the 10T.

I’m in agreement with Powell on this topic.  Inflation (as well as expectations) will surge this year, but fade over time.  Don’t expect the Fed to suddenly shift gears just because we get a 3.0%+ CPI print in the months ahead.

We got strong data on Thursday, which spared the largest single-day decline in 10T yields since November.  There has been a large surge in Treasury shorts to start the year, particularly among hedge funds. 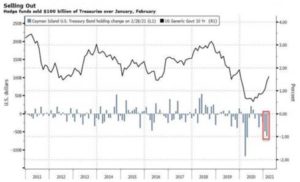 Thursday just happened to bring some significant data that failed to dramatically exceed expectations, so there was a large short covering.  Nomura noted, “this recent bout of UST bull-flattening is largely a function of profit-taking and unwinds of crowded shorts and steepener positions, and as such, will likely see redeployment at “better levels” now that positioning is much cleaner…”

In other words, after loading up on short positions the last few months, we are in the midst of a mass unwind.   The reset button has been pressed, making it plausible that we will experience another surge of shorts in the coming months, pressing the 10T higher and starting the process all over again. 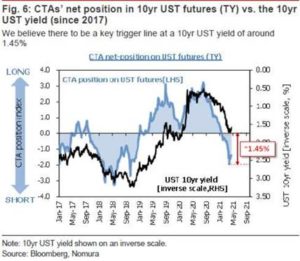 To be clear, this is not the base case – merely a possibility.  But it highlights that market movements right now are driven far more by technical trading reactions than plain vanilla data prints.

The more likely scenario seems to be another surge of shorts as the market wonders if tapering is pulled into 2021 as GDP and payrolls improve dramatically.

Pretty benign week on the data front, with no real market movers on the docket, but earning season continues.  Refinitiv calculated that firms beat expectations by an average of 84% last week.

The ECB will hold rates steady, but markets will be monitoring any mention to tapering.

It will be interesting to see if the 10T breaks back through 1.62%-ish or if we are now in a new, lower range.