The 10T finally broke through a key resistance level, pushing through 2.31% and spending the week bouncing around the low 2.20%’s.  This level has held since the election – are we poised to run to 2.00%? 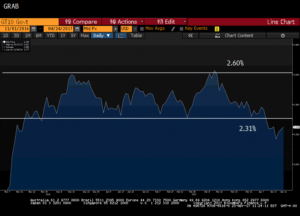 Not yet.  We think the drop is really just the short squeeze we’ve been writing about for the last few months.  Take a look at the dramatic reversal of shorts over the last few weeks, which really began once the repeal of Obamacare failed.  Here are two graphs illustrating how trader’s holding finally capitulated over the last two weeks. 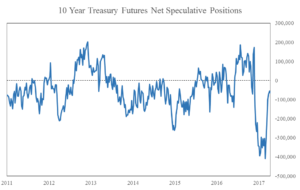 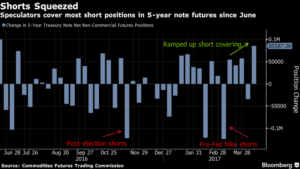 The macro themes that drove rates up post-election are still hovering over the collective heads of the market.  While Trump may have failed to make significant progress on the economic fronts the market cares about (and no, the market doesn’t care about the wall), within the first 100 days, he is still predisposed towards pro-business stances.  Obamacare might have been a litmus test for other policies, but the market never really cared about Obamacare repeal.  If Mnuchin can make headway on tax cuts (tax reform may be off the table at this point), stimulus package, and regulatory scaleback, the market will shrug off the Obamacare snafu.

It is not uncommon after a massive short squeeze for the Treasury market to find its balance and basically start over.  If inflationary policies start gaining traction again, the Treasury can run back up to 2.60%.

The T10 has retraced 50% of its movement, which makes it susceptible to a new wave of shorts assuming an absence of negative news.

But there’s also a chance the market hasn’t fully covered shorts and bad news will drive more short squeezing, pushing yields lower.  There is no doubt that the market is a little bit more dubious about Trump’s ability to unite the GOP and enact meaningful change.  The longer Trump struggles to make advancements on his platform, the greater the likelihood the T10 drops back below 2.00%.

The market’s resolve has been tested and is less likely to wait as long to cover painful short positions moving forward.

Additionally, there is some growing concern about the health of the economy.  The Atlanta Fed’s own GDPNow forecast can’t stop revising its own forecasts lower.  It has been revised lower to 0.5% for 2017.  This is not a quarterly number – the Atlanta Fed is suggesting the US economy will grow 0.5% for the entire year.  It was forecasting 3.4% in early February. 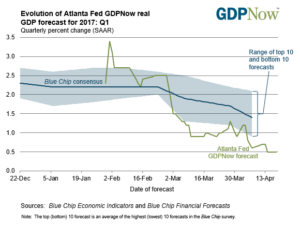 Oh yeah, and the government might be shut down next Friday.  So that’s fun…

Global Concerns
In the most closely watched Russian election since November, a Le Pen win could cast doubt on the continued existence of the EU (since she promised to exit).  As a quick reminder, yesterday’s vote was to determine the final two candidates for a national vote on May 7th.  While the market will be happy in the near term because it avoided a far left vs far right showdown, a Le Pen win would likely lead to a Frexit referendum, which could be much more impactful in markets because England never adopted the euro.

If France, the 7th largest economy in the world, exits the EU, will the EU continue to exist?  Will the euro continue to exist?  How badly could that impact the global economy?  Presumably French bonds, no longer backed by the ECB, will experience higher yields.   The US will be a natural landing spot for a flight to safety mentality.

This type of scenario may not materialize if Le Pen doesn’t win the election, but traders will be far less likely to be caught off guard than after Brexit or the Trump win.

You may hear the IMF upped its global GDP forecasts.  Just keep in mind that the only agency that forecasts worse than the Federal Reserve is the IMF.

Passive Tightening or Quantitative Easing?
As we have been discussing for months, the Fed has been sending warning shots across the bow about passive tightening.  Yellen wants to shrink the Fed’s balance sheet as part of the rate normalization policy and the first step is to stop reinvesting proceeds back into similar bonds.  That should exert upward pressure on Treasury yields and we think Yellen will use this in conjunction with hiking Fed Funds and maybe even in lieu of rate hikes.

But we also think there’s a good chance the Fed will launch another round of QE before it can begin passive tightening.  If the economy slows, nationalism dismantles the Eurozone project, China slows, the federal government shuts down, etc there’s just as much of a chance the Fed embarks on another round of QE to help keep the economy stimulated.  We are hooked on free money and there’s a reason it is hard to hike off the zero bound.

Fed Funds
I’m going to try my hardest to not beat a dead horse, but I just don’t think the Fed can hike anymore with the yield curve as flat as it has gotten over the last few weeks. 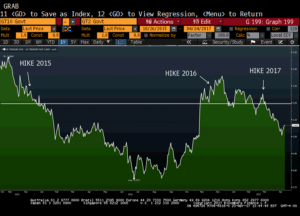 Yellen wants to hike in large part just to get away from 0%.  She hikes when the market allows it, not when she decides is the right time.  If the yield curve steepness (spread between T2’s and T10’s) is around 1.00%, we don’t think she can hike.

The market is also lowering its odds of hikes, with June down to 50%.  The market is still pricing in two hikes this year, but odds of three hikes have been backed out.

If the market refuses to push the long end of the curve higher, Yellen can help out with her passive tightening discussed above.  She may also get some help form the ECB if Draghi starts some sort of tapering program, which should push up Euzone bonds and give the US Treasury market rope to move higher.

This Week
Busy economic calendar, headlined by Q1 GDP, while the Fed-speaker calendar is light.  But politics and global developments will continue to dominate markets.