As expected, the Fed hiked 75bps, pushing SOFR above 3%. Here were my main takeaways.

The Bloomberg Intelligence team has developed this interesting index that attempts to measure the opening statement by the Fed chair of the press conference. For the first time since December, this index showed a slightly dovish movement. Make no mistake, the opening comments were still very hawkish, but less so than the last meeting. This sentiment is tracked in the blue line below. 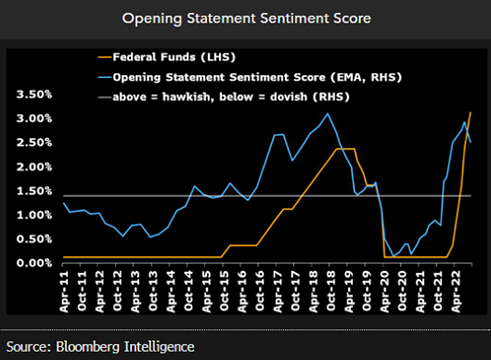 Is It Too Early to Talk About the Fed Overshoot?

Tightening is working. Real estate valuations are down 10%+. Stocks have gotten whacked. Financial conditions are in restrictive territory. Supply chain pressures were already easing and have continued.

Powell said at the March hike the impact of these decisions wouldn’t be felt for 12-18 months, yet we are hiking aggressively because the most recent CPI number was higher than expected?

Financial Conditions have officially crossed into restrictive territory. Since 2008, every other time this has occurred was immediately with Fed accommodation (cutting rates, more QE, etc). This time, they will continue tightening.

Here’s a graph of the one-year inflation breakeven, which is essentially where the market expects inflation to be a year from now. Since March, it has collapsed from 6.4% to 2.0%.

The Liquidity Index shows how much tighter markets have gotten, matching the spike experienced during covid.

It seems likely that unemployment will move from 3.5% to 4.5% in the next year or so, which will cost about 1.5mm Americans a job.

Because I’m a silver lining kind of guy, I’ll end on a positive note. That Liquidity Index looks pretty scary when viewed over the last 10 years, right? But if you extend it just a bit further to capture the financial crisis, things don’t look that dire.

I can’t shake this feeling that inflation is going to roll over, but by the time it does it will be too late. The Fed will have over-hiked due to the lag and they will end up cutting far more than they are currently projecting.

The 10T surged to its highest level since 2010. I believe 4% is definitely on the table, but mostly in the near term.   If the economy slows as much as expected next year, there will be a flight to safety and the market will start pricing in aggressive rate cuts.

The week will go out with a bang, bringing Core PCE (the Fed’s preferred measure of inflation). The m/m forecast is for an increase from 0.1% to 0.5%. Although this reading was set into motion a year ago, the market will puke over it and the headlines will scream that inflation is still surging.

We’ll also be flooded with Fed speak and a GDP revision.