We have made improvements to the forward curve we post to our website each week.  Rather than simply including monthly resets, we’ve added a cool feature that allows you to shock the curve.  Now you can select 1 or 2 standard deviation movements, FOMC projections, or a simple fixed rate.  We hope this helps you run slightly more sophisticated analysis so when rates don’t move as expected you can at least say, “hey, wasn’t our faulty assumptions, it was the market’s faulty assumptions.”

Two weeks ago, San Francisco Fed President John Williams was named as the next NY Fed President.  He replaces William Dudley, who announced his retirement in the fall.

The NY Fed President position is different than others for a couple of reasons.  Firstly, they are considered the eyes and ears of Wall Street, overseeing the largest banks in the county.  The most well-known NY Fed president in our lifetime was probably Tim Geithner.  Can you name another regional Fed president during that time not named Janet Yellen?  Me neither.  The NY Fed President is just different.

Secondly, they have a permanent vote on the FOMC, whereas other regional presidents rotate.  Thirdly, they also serve as vice-chair of the FOMC.  It is not a stretch to call this the second most powerful position at the Fed.

This position is likely even more critical under the new Fed regime, headed by Jay Powell – a lawyer, not a PhD.  Williams earned his PhD at a lightly regarded institution better known for athletics than academics – Stanford University.  I think they hand out PhD’s like candy out there.  Powell’s lack of a PhD (which we think could actually be good for monetary policy) does open the possibility that he leans on the most critical FOMC members more than a predecessor like Yellen would have.

Williams has suggested the new neutral rate is 2.50%.  Hold that thought.

Last week, Trump nominated Richard Clarida to Vice Chair of the Federal Reserve (different than vice chair of the FOMC, confusing, right?).  This is the other position that is generally regarded as the second most critical position within the Fed.  Clarida replaces the highly regarded Stanly Fischer, who stepped down unexpectedly in October.  He is known for using computer models to analyze shocks to the economy, earned a PhD from Harvard, teaches at Columbia, and has been working at PIMCO for the last decade.  Sounds just like most resumes we get at Pensford.

Starting to detect a pattern?

Both nominees have suggested a new neutral rate of about 2.50%.  The neutral rate is the rate at which monetary policy is neither accommodative nor restrictive.  This is a critical admission that lower interest rates, over the long term, are considered the new norm.  To put this into perspective, the SF Fed published a paper in 2005 that suggested the neutral rate was 3.50% – 5.50%.

While both nominees have suggested the Fed could hike faster than expected if inflation really starts to ramp up, both view the long-term equilibrium just three hikes above current levels.  The markets will likely welcome these nominations because now the three most important positions at the Fed are filled by pragmatic, experienced white men decision makers that aren’t overly hawkish.  You may recall that Trump was considering John Taylor and Kevin Warsh for the Fed Chair position, both of whom follow policy rules that would imply Fed Funds in the 5.00% range.   The market was not excited about either of those.

One other key element for both nominees is a general belief that the regulatory pendulum has swung too far.  Couple that with the addition of Randal Quarles as the Vice Chair of Banking Supervision and it would appear that Trump has reshaped the Fed with relatively moderate monetarists (is that a real word?) with an eye on streamlining regulation.  Whatever you think about Trump (and we haven’t been shy expressing those feelings here), his Fed appointments look great to us.

The Fed has traditionally done a poor job of increasing interest rates, usually hiking us into a recession.  Perhaps the new regime will strike the appropriate balance and guide the economy into a soft landing.  While the tax cuts may have extended the business cycle in the near term, the Fed composition may have a greater impact on this cycle over the next 5-10 years.

There was a ton of Fed-speak last week.  Maybe there was something in the water, but more chatter than usual.

The aforementioned John Williams warned that he would view, “yield curve inversion as a warning signal” and that an “inverted curve was a powerful recession signal.”  Finally! Someone at the Fed is reading this newsletter!

Williams also said he expects inflation to rise to 2.0% this year and stay at or above that level for “another couple of years.”  This conviction strongly suggests a hiking bias.  Williams clearly believes the Fed needs to keep hiking to prevent the economy from overheating.

The also aforementioned Clarida said, “We could get four hikes if the growth in the economy is stronger because of the tax cuts.  But importantly, also, you’d actually need some indication that inflation is moving up too quickly for the Fed’s taste.”  Again – conviction that inflation will climb.

Board of Governors member Lael Brainard (dove, permanent voting member) expressed support of a gradual rates hikes given solid economic growth and belief that inflation will reach 2.0% this year (there it is again).  She also expressed uncertainty over the impact of fiscal policies and trade disputes.

Dallas Fed President Robert Kaplan (moderate, non-voting) favors two more hikes this year, in part because he believes growth will be restrained in 2019 and 2020.

We think they’re right.  We expect the yield curve to steepen and the 10T will push to 3.25% at some point this year.  This will give the Fed all the room it needs to keep hiking this year without inverting the curve.

Four months ago, the 10 year Treasury was below the current 2 year Treasury yield and the Fed isn’t worried about the possibility of an inversion?

Recall that the 2 year Treasury is generally just what the market thinks Fed Funds will average over the next two years.  If the Fed convinces the market that Fed Funds is going to 3.00%, at some point the 2T will move to 3.00%.  How much easier is it for the curve to invert if the 2T is at 3.00% instead of 0.30%?

While we agree in with the Fed that the yield curve will not invert in the near term, we believe not enough attention is being paid to the likelihood of pushing up the front end to a point where the 10T could easily dip below and invert the curve.

But don’t just take our word for it.  St Louis Fed President Bullard (dove, non-voting, likely Mensa member, probably very good looking, genius prognosticator, interest rate guru, and all-around really smart guy) said, “If the Committee pushes ahead here with rate increases and longer rates don’t cooperate, we could have an inverted yield curve within six months.”  He went on to say, “I think this is an issue that very much should be debated in monetary policy circles.”

Because the 2 year Treasury is driven more by the expected path of Fed Funds than current Fed Funds, the Fed can probably keep hiking this year and push Fed Funds to 2.25%.  But it will have to pay careful attention to the messages it sends about 2019 and beyond.

The Fed could yank the 2T back down to Fed Funds levels by saying, “we won’t hike for the next two years.”   If FF is at 2.25% when they make that kind of statement, the 2T would collapse back to 2.25%-ish.  But that’s an extreme scenario.

More likely would be the reduction in the number of expected hikes in 2019 and 2020, perhaps putting the stopping point at 2.50% (where many FOMC members believe the neutral rate is), which would keep the 2T at current levels.

Either way, the Fed will need to closely monitor the signals it sends about the future path of rate hikes if inflation doesn’t arrive as expected or if the yield curve doesn’t steepen as expected.

The Secured Overnight Funding Rate, or SOFR, ran into some problems its first week of publishing.  Some participating banks reported abnormal trading volumes, which led the NY Fed to investigate.  It determined that it had mistakenly included some repo transactions that should not have been included.

This influenced the SOFR resets from April 2-12, meaning Friday the 13th’s SOFR was the first clean report.  There will obviously be hiccups with this new index, but these sort of issues highlight the challenges of widespread market adoption by 2021.

More importantly, the CME is set to open SOFR futures trading on May 7th.  The development of a futures market will be critical for forward curves, hedges, etc.

The British Banking Association (BBA) had to give up oversight of LIBOR following the scandals post-crisis.  ICE stepped in and has been publishing LIBOR using the same methodology since then.

It would seem that ICE has and incentive for LIBOR to remain the benchmark, right?  Guess what – they are trying to transition away from a survey based index to one supported by actual transactions, exactly what SOFR is meant to do.  “Hey, no need to switch to SOFR because we’ve got a new methodology that addresses your concerns without having to change all those pesky loan docs…”

The general idea is that each bank will calculate LIBOR, but will need to progress from market driven to opinion driven.

Actual Transactions – volume weighted average combined with a weighting system for trades closer to 11am London time (when the survey is submitted).

Extrapolation – if the bank hasn’t had any actual transactions in the last 24 hours, it can use the last actual transaction and rate movements since then to extrapolate a reasonable level.  But they can only do this three days in a row.

Guess Expert Opinion – the current system where the bank does its best to estimate its own cost of funds.

The ARRC may want to move to SOFR, but ICE is going to do its best to make LIBOR a more market-based index in order to address the biggest concerns and hopefully extend the useful life of LIBOR.

Remember when we were beating a dead horse about 2.62% being the most critical resistance level on the 10T?   That level had held for four years and we believed that if it broke, the T10 would move to 3.0% before it encountered another resistance level. 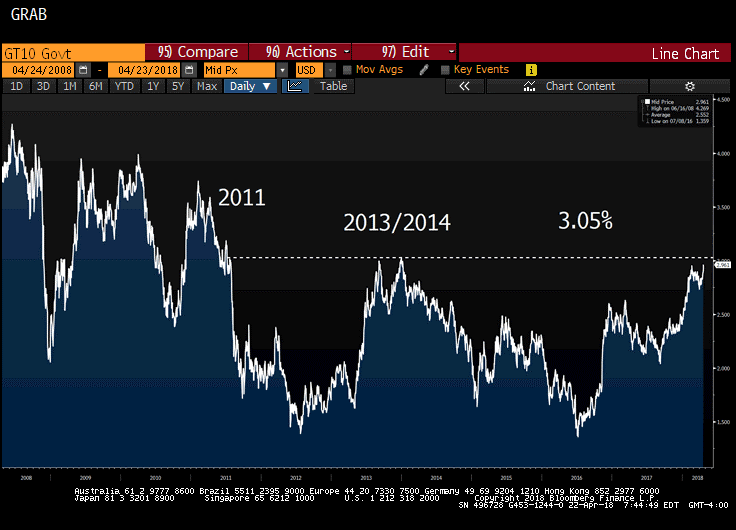 Much lighter week for Fed-speak as they go dark ahead of the following week’s meeting, but some critical data points due out.

The ECB has a meeting on Thursday.  While it is expected to be a non-event, remember that Draghi is expected at some point to start signaling an end to QE by year end.  Any language around that tapering process could swing the Bund, which in turn could impact rates here.

The BoJ meets Friday, which is a bit like a SoCal weather report.  “Yeah, 70° and sunny today…”

Other than signals about softer tariffs, the GDP and PCE data on Friday is the greatest chance of breaking 3.00% on the T10.