The 10 year Treasury actually began testing 2.62% on Wednesday following Tim Cook’s comments about repatriation of $245B in cash.  One of the key benefits of Trump’s tax bill is the “encouragement” of repatriation. 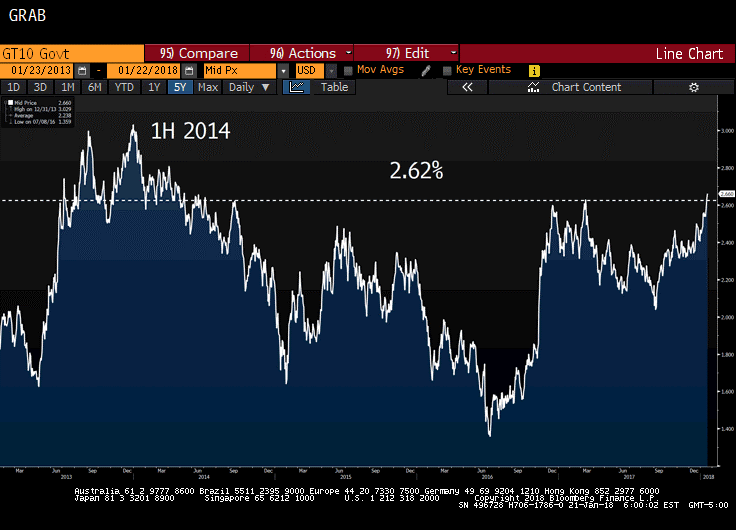 If Apple is doing it, others must be doing it as well.  GDP.  Inflation.  Room for the Fed to hike.  All positive signs for the economy and an excuse for rates to move higher.

Then on Friday, the looming government shutdown finally pushed the Treasury yield through 2.62% late in the day.   Generally speaking, markets shrug off a shutdown – particularly if it is short lived.  The longer the shutdown drags on, the greater impact it has on GDP.

Friday’s move, however, wasn’t because of the projected impact on inflation or GDP.

It was because of the potential impact on the debt ceiling debate next month.

The debt ceiling was hit in mid-December.  Since then, the Treasury has been using its “extraordinary measures” to pay the bills.  This really means it is borrowing from internal accounts (like federal retirement funds) to pay debt service.  Market consensus is that the Treasury can keep employing these methods into March before the well runs dry.

Fitch’s statement on the matter:

“Partial federal government shutdowns have occurred in the past and this shutdown does not have a direct impact on the sovereign’s ‘AAA’/Stable rating.

Its main implication for the US’s sovereign creditworthiness would depend on whether it foreshadowed a further destabilization of US budget policymaking, or brinkmanship over the federal debt limit.”

The bottom line is that if the 10 year Treasury had been closer to the middle of the range, the shutdown may have still pushed yields higher by 4 basis points, but it would have mattered less.  For example, moving from 2.35% to 2.39% is inconsequential.

But because the 10T was already sitting atop the four year support level of 2.62%, the news came at a unique time.

We’ve been pounding the table for so long about 2.62% as a key threshold, does that mean the T10 is running to 3.0% immediately?  Probably not, if only because the break was an artificial one.

When we envision a run to 3.0%, its on the back of inflation/growth, not the temporary (hopefully) fear of a Treasury default.

We would expect to encounter some opportunistic buying here, preventing the T10 from pushing through the key psychological level of 2.75%.  The German Bund has recently climbed to 0.60%, but has stalled out.  With the 10T still climbing, this means the spread between the two has widened to recent highs.  This could help keep a lid on the 10T if the Bund doesn’t start climbing. 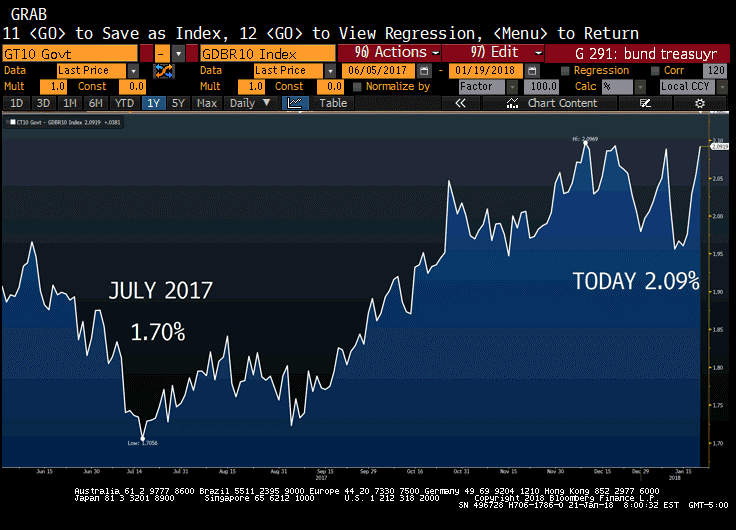 But there is so much uncertainty here that anyone that claims to know what comes next is being dishonest.  We don’t think the government shutdown will lead to a 3.0% T10, but we don’t know for sure.

Our base case – T10 remains elevated, maybe even climbs and tests 2.75%. But this isn’t the catalyst for a 3.0% run.  Once the dusts settles, the T10 can resume a climb but it will be fundamentals driven and not panic driven.

Also, it isn’t just the long end of the curve testing highs.

For our clients, the spike in 2 year rates is notable because of the impact it has on cap prices.  Here’s a graph illustrating the 2T over the last five years.

I can’t believe I’m even still typing this with the Eagles hosting the NFC Championship today.  If the T10 hadn’t broken 2.62%, I probably would have taken the week off.

Politics will dominate the news with the shutdown, particularly with the lack of critical economic data.  Friday brings GDP and durable goods.