PPI (annual) has improved considerably since the first hike in March. If this pace continues, Core PPI would hit 2% in August 2023.

PPI (monthly) showed prices were actually flat month to month, which we hadn’t seen since 2020.

The market started thinking about a Fed pivot, which was so premature that numerous Fed officials trotted out to disabuse the market of this notion.

Market is hopeful for a pivot and the Fed is pounding the table about continued hikes. Here’s the thing – I think they’re both justified in their views.

The market just needs a light at the end of the tunnel. It already has a 5% Fed Funds baked in and just wants to take 6%+ off the table. A pivot doesn’t have to happen this this second, just some point in the next 3 months.

“Give me literally anything to be hopeful about. Please.” – Market.

Better to let off the brakes too late than too soon. If they start signaling a pivot, they risk allowing inflationary fears to creep back into our collective psychology. We’ve had two other similarly positive inflation reports this year that quickly turned out to be pump fakes in subsequent months. Whenever they pause, the market is going to react, so they want to make sure it isn’t premature.

“We need to keep sending signals about tightening until we have a very clear trend lower on inflation.” – what Powell would say if he would respond to my requests to be on our podcast.

Bank of America’s investment manager survey shows a whopping 92% expect a stagflationary environment in 2023. The other three potential scenarios combine for the remaining 8%. 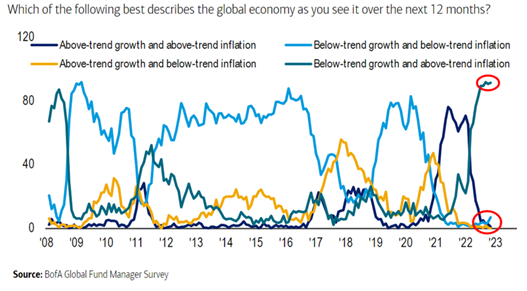 Remember those graphs at the beginning that suggested we could get inflation back to 2% by year end 2023? Given those signs of progress, why are these investment managers so pessimistic?

Things looked pretty bleak in October, with conditions tightening to 101 (where 101.5 is the general recession threshold). But signs of cooling inflation over the last few weeks helped drive conditions easier.

This tells me the Fed will keep talking up hikes, knowing they have some rope to play with now.

In fact, most the inflationary pressures can be found in two places – Services and Shelter.

While CPI Goods have plunged, CPI Services is up 6.7% and still climbing.

A slower week ahead with Thanksgiving on Thursday giving the markets a much-needed breather. But worry not! There’s still something to look forward to - ahead of digging into that perfectly fried (burnt) turkey, you get to dig into the FOMC Minutes on Wednesday. Aside from that, just some Fed speak, housing and PMI data.