Fed speakers last week all seemed intent on locking in expectations of a 50bps hike on May 4th. In fact, markets are now pricing in 50bps hikes at the next four meetings. 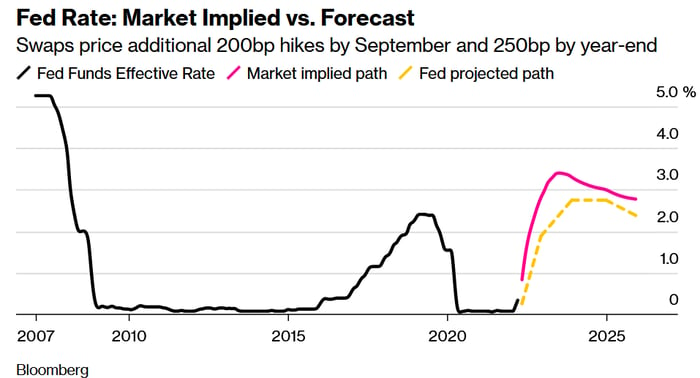 Options traders are loading up on unlikely but not impossible 75bps hikes.  BofA and Barclays both called for rates to top out…and then reversed those calls within 24 hours.

I believe the Fed will struggle to maintain a 3.0% Fed Funds, and that they may end up not hiking as much as expected.  If Q1 2023 shows plunging inflation and slowing economic growth, isn’t there some chance the Fed will ease off the brakes?  I personally believe this market reaction is overdone….but…that sort of correction is at least 6-9 months away.

Unfortunately, if the Fed was late to the inflation party, there’s a good chance it will be late to the soft landing party.

As the market comes to grips with the maximum hawkish Fed, and the reality that the economic data is still coming in very strongly, I think 3.0% on the 10T might come this week or next.

In fact, I think 3.0% is a foregone conclusion at this point.  The bigger test will come at 3.25%, a level the market tested for one day in 2018 before plunging.  If we break through 3.25%, it could be the dam breaking.  I don’t think that will happen, but if the Fed is taking floating rates to 3.0% and the economy is going gangbusters while tightening takes its time to work through the system, I can see a scenario where bond holders throw in the towel.

There are people reading this with 10 years’ of experience in our industry who have never seen a 3.25% 10T.

The first look at Q1 GDP is set to arrive, with consensus forecasts of just 1.0%.  This is not related to the recent chatter about an inverted yield curve and a recession in 2023/2024, but rather the impact omicron had on the economy.  Yeah, I had forgotten about that, too.