Are We Too Focused on Jobs?

The labor market continues to be described as “resilient”, but is it? Hiring is clearly slowing.

In fact, take a look at how jobs typically perform in the six months leading up to the Fed pause. Does the current job data really feel that much different?

With this context, why are we treating a 260k print as if it’s an outlier when it’s following the same pattern as before.

I’m not suggesting the labor market is weak. I’m suggesting it’s a poor indicator of when the Fed will pause.

Core PCE, the Fed’s preferred measure of inflation, mercifully showed some progress. The monthly data was forecasted to come in at 0.5%, but came in at just 0.22%. This is a huge win. 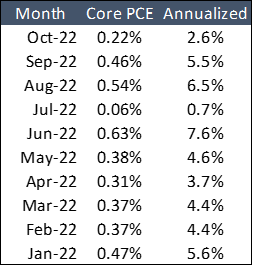 This all but guarantees a 50bps hike next week, which will put Fed Funds upper bound at 4.50%. The Fed will get one more CPI print before the rate announcement.

Next week may start off quiet with no Fed commentary ahead of the December FOMC meeting. Markets will be watching for PPI and UMich inflation expectations later in the week.