April is Going to be a Bad Year

I was struck by how partisan the responses were, although in hindsight I probably shouldn’t have been.  Coronavirus is a Rorschach Test.  But doesn’t that say more about us and the times we live in more than a newsletter?  If a pandemic can’t tear down political walls and bring us together, what can?

For those who interpreted the newsletter as a political piece, it was not.  I am politically agnostic when I write this newsletter.  Republicans that had never heard of me until last week will be disappointed to learn that most of the hate mail I have received over the years has been for questioning Trump.

More than ever, I believe our discussions should be rooted in data.  We need more, not less, reliance on truthful data.   This is especially true when the stakes are as high as they are now.  As the headlines get worse and emotions run high, it’s natural for our responses to be driven by feelings.  We should be very careful about making sweeping decisions while in that mindset.

I wonder if some of the hate mail I got last week was from people that have never experienced a sharp economic downturn.  The last month of job losses was August 2010.  The last time we had two consecutive quarters of negative GDP was the second half of 2008.

Think about that for a second – if you’re under the age of 34, you’ve never experienced a recession.  These are employees with a significant amount of responsibility, not 22 year old analysts.

ABC News reported, “One in three Americans say they or an immediate family member have been laid off or lost their job as a result of the pandemic, and more – half – report a cut in pay or work hours.”  (https://abcnews.go.com/Politics/report-job-loss-half-pay-cut-coronavirus-crisis/story?id=69811808)

The US economy is likely to lose more jobs in three weeks than it lost during the entire financial crisis.

My request this week is the same as last week – if you believe we should shut down the country based on epidemiological models, please at least factor in the economic models as well.  Medical decisions should not be made in a vacuum.  Flattening the curve for the next year while we develop a vaccine doesn’t sound economically realistic to me.

Let’s compile all the available data and make the most informed decision possible.

Kudos to Congress.  I spend a lot of time bashing them for their inaction and reliance on monetary policy to fix everything, but they managed to get something done.

I can’t help but to think back to the 2008 financial crisis.  Everything grinded to a halt.

While that feeling of everything stopping at once is the same as 2008, I think today’s cycle may be the inverse of the financial crisis.  Two weeks ago, I wrote about how in 2008 it felt like the further out we looked, the less certain we felt.  When would it end?  Today, the opposite is true.  There is a light at the end of the tunnel in some form or fashion, but how much pain will we endure between now and then?

Back then, the extremely simplified slowdown went a bit like this:

But today, it’s starting with tenants and working back the other direction.

In 2008, there were a lot of daily discussions around which banks to save, which regulations might create a moral hazard, should we use tax-payer money to bail out fat cat bankers?  It was an economic death by a thousand cuts.

Based on last week’s passage of the CARES Act of 2020, the federal government and the Federal Reserve appear to have learned their lesson from 2008.   If we’re eventually going to find our way to the bottom, let’s just cut to the chase and go all-in now instead of in six months.

Check out this timeline from the financial crisis.  It really kicked off with the Bear Stearns subprime hedge fund collapse.  After that, it took 18 months to cut rates to 0%.  Some bailout packages actually failed to pass in Congress initially because of the political reluctance.  Stocks didn’t bottom out until March 2009.  About $3T in total stimulus by March 2009. 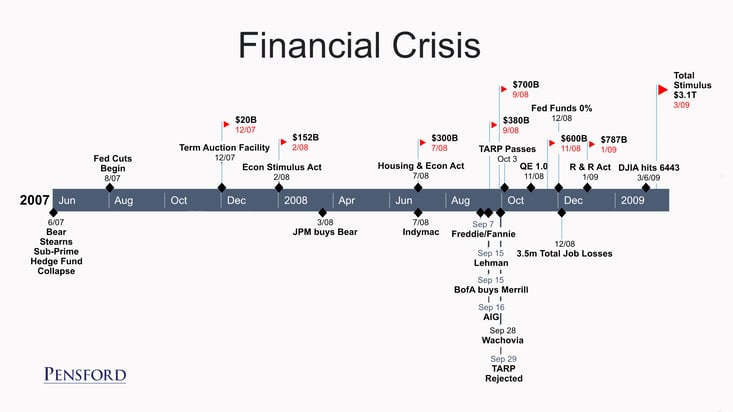 Milton Friedman coined this term, using the following example.  “Let us suppose now that one day a helicopter flies over this community and drops an additional $1,000 in bills from the sky, which is, of course, hastily collected by members of the community. Let us suppose further that everyone is convinced that this is a unique event which will never be repeated.”

In a normal environment, if someone hands you $1,000, you’re probably going to spend it.  The intent is to increase demand, particularly in times of illiquidity.  It was originally intended as an alternative to Quantitative Easing, but clearly now we are using both.

The CARES Act 2020 is a giant helicopter money experiment.  Here’s how the federal government’s helicopters plan on dropping that money in the coming weeks and months.

The government will be issuing checks to most Americans in the coming weeks, generally between $1,200 – $2,400.  This should total around $250B.

A $490B direct bailout of industries like airlines and hospitality, with a $150B specifically for healthcare.

There are really three prongs to this aspect of the Act, totaling over $1.2T.

The intervention is staggering and unprecedented.  But Friedman’s example assumes we are in a normal economic environment.  Three months ago, dropping $1,200 cash onto someone probably translated into close to $1,200 in spending.  But today?

Earlier, I described the current economic slowdown like this:

The government is simply inserting itself at the beginning of the chain.

The intent is clear – if the Federal Government can stand in for the economy for a few months, maybe we survive to the point where the economy can re-open.  This is easily the biggest bail out in history.  It won’t be the last.  If we learned nothing from 2008, it was that the first bail out package is never the last.

Quantitative Easing.  Primary Dealer Credit Facility.  ZIRP.  Discount window.  Dollar swap lines with foreign central banks.  Couple all of that with fiscal policy and the US Federal Government is all-in.

The most immediate impact is likely to be seen in the markets.  The first step is to stop the bleeding.  Will this be enough to put a floor in asset pricing?  Powell is betting on it.  You can view trickle down economics as voodoo but still appreciate that the companies making large scale payroll decisions are closely tied to markets.

The second step will be pricing stability.  We can adapt to wider spreads and factor that into our decisions, but right now no one has a sense of where anything might clear.

When it comes to the economy, I think these massive interventions will help keep the economy from collapsing completely, but I still think we’re headed for a massive contraction in Q2.  And I’m not as optimistic as most that Q3 will begin the rebound.

If you’re a minimum wage worker and the government sends you $1,200, what do you do with that money?  You spend it on only the most critical items.  Food.  Medicine.  Shelter…unless you know you won’t be evicted for not paying.  I’ll worry about eviction three months from now, I need to put food on my table.   That same calculus applies to utilities.  I can probably skip a payment on the electric bill, but I can’t wait another week for food.

What non-essential items are you buying with that $1,200 right now?  Nothing.  A study done on the 2008 tax rebates found that about a third of the money was spent, while the rest was saved ((https://blogs.wsj.com/economics/2009/12/16/most-2008-stimulus-checks-were-saved-not-spent/).  Just like we saw in 2008, a small portion of this money will be spent immediately on the most essential items, and the rest will be saved.

And if you’re not a minimum wage worker, what non-essential items are you buying right now?  That check may not mean the difference between food on the table today, but it might eventually.  What if you get laid off this week?  Or next?  Even if you have the money, are you really running out to buy a TV right now?  A car?  A house?

And if you’re a high wage earner and have no immediate concerns, are you running to the BMW dealership right now?

The same applies to the payroll stimulus.  Great, I got a paycheck this week.  And will get one next week.  But over that same timeframe, 6 million Americans lost their job.  Am I really so sure I won’t eventually be one of them?  No, so I sit on my money.  Plus, I’m not allowed out of the house so what would I spend it on anyway?

Some other initial concerns off the top of my head:

This bailout does not solve the demand shock.  Only confidence will do that.

These measures are designed to stop the bleeding and help keep Americans on our feet while we face this pandemic, but demand will ultimately determine if this is a U-shaped or V-shaped recovery.

Early reports out of China post-quarantine suggest a U-shaped recovery is more likely.  Just because the quarantine has been lifted doesn’t mean they have immediately returned to normal life.  They are still voluntarily practicing social distancing measures, which creates continued lack of demand.  The quarantine has been lifted, but couldn’t another wave be coming?  I was caught off guard the first time, I won’t make the same mistake twice.

The fiscal and monetary policy response is bold, aggressive, and much needed.  It will help avoid a depression, but not a recession.

But I don’t believe this will be like flipping a light switch on, even when we begin to return to normal life.

The economy won’t fully rebound until coronavirus no longer poses a threat.

Every other scenario is a half measure and will limit the recovery.

The economic light switch will be flipped only when we no longer fear coronavirus.

Solve that, and we can get back to work.

Total number of cases and deaths will continue to rise because we are probably weeks away from peaking.  This creates a significant amount of headline risk.

Jobless claims will once again be staggering, likely to exceed 3mm.  The unemployment rate will begin to climb, with consensus forecasts for Friday’s job report to show 3.8%.  But that’s a meaningless number, it will probably be over 7% in a month.  Most economic projections suggest double digit unemployment by May.

April is going to be a bad year.