Beginning of the End of the Credit Cycle?

The March FOMC minutes show a growing consensus behind closed doors that the economy is still strengthening and that inflation is finally showing up in the data.  There is also more and more talk about the economy overheating and the FOMC seems to be shifting from an accommodative stance to a more neutral position.

These are somewhat offset by areas of uncertainty, most notably the potential for a trade war as well as the impact from the tax cuts.  In a vacuum, however, the Fed’s position is clearly hawkish.

Surprisingly, odds of a June rate hike actually dropped from 93% to 83%.  While still an incredibly high probability, the drop probably suggests the Fed is overly optimistic and not adequately factoring in external shocks that could force their hand to press the pause button.

The same futures markets now have a 25% probability of an additional rate hike this year (four instead of three).  This would put LIBOR above 2.50% instead of 2.25% by year end.  We are less focused on this fact since the Fed would likely hike in early 2019 anyway – how much does it really matter if LIBOR hits 2.50% in December or March?  Also, there’s a 25% probability that the Fed only hikes once more this year.

Bottom line – barring a reversal from a trade war or a market shock (eg stock sell off), the Fed’s current plan is to keep hiking and potentially inject an additional hike in 2018.  The Fed does not want to fall behind the curve, over-hike to catch up, and throw us into a recession.

This, of course, will require the 10 year Treasury to play along and climb again.  A yield curve flatter than current levels is just begging for talk of an inversion.

The market is massively short the 10T right now.  Absent bad news, this suggests an upward bias on fixed rates.  The 10T may struggle to break 3.00% right now with some pretty big dampening factors (wars – trade and military) hovering like a dark cloud over the market, but a run up to the mid 2.90%’s feels reasonable.

Much like the post-election short, however, the market is clinging to this trade for an unusually lengthy amount of time.  Should a drive higher in yields fail to materialize, eventually traders will be forced to capitulate.  This could lead to a sizeable short squeeze just like the one we saw in March 2017.  This would push yields lower as the market hits the reset button. 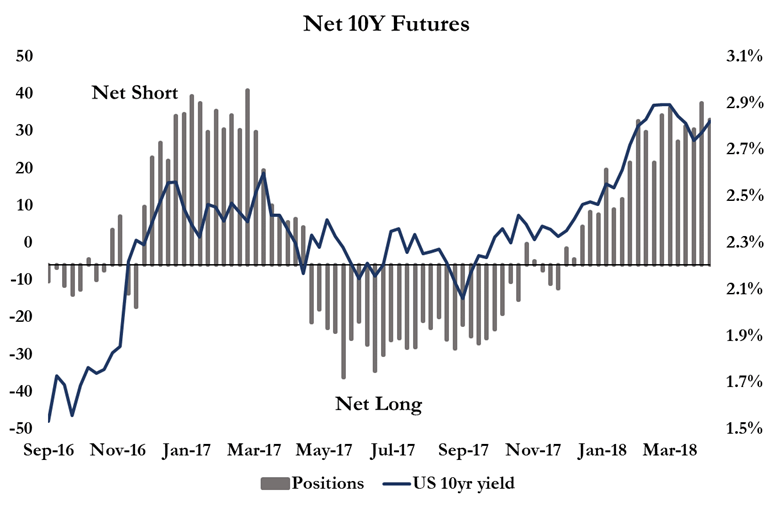 Setting aside QE and the fear of tariffs/geopolitical risks, the T10 seems artificially low.  That helps explain the staying power of this collective short position.

It also explains why we aren’t confident that another short squeeze is coming like we saw last year.

Assuming those boxes get checked, the market could turn its attention to the economic fundamentals and the move higher regains steam.  If Draghi ever stops committing to unlimited bond buying, that last box next to “Euzozone yields” might get checked, too.

The Fed tightening cycle is finally impacting consumers.   The S&P/Experian Consumer Credit Default Indices measures the proportion of consumer credit that goes into default for the first time.  This index measures the default rate across auto loans, mortgages, and credit cards.

This index hit its highest level since 2012, suggesting the consumer as a whole is starting to struggle with slightly higher interest payments.

While bank earnings may have beaten estimates, this sort of graph has to worry markets.  The increase in defaults corresponds nicely with the Fed tightening cycle, meaning as interest rates climb so do defaults. 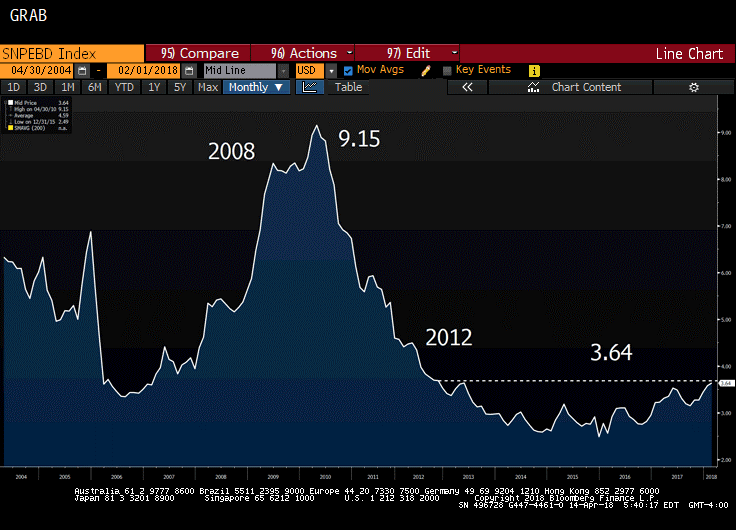 Other fallout from higher interest rates include: 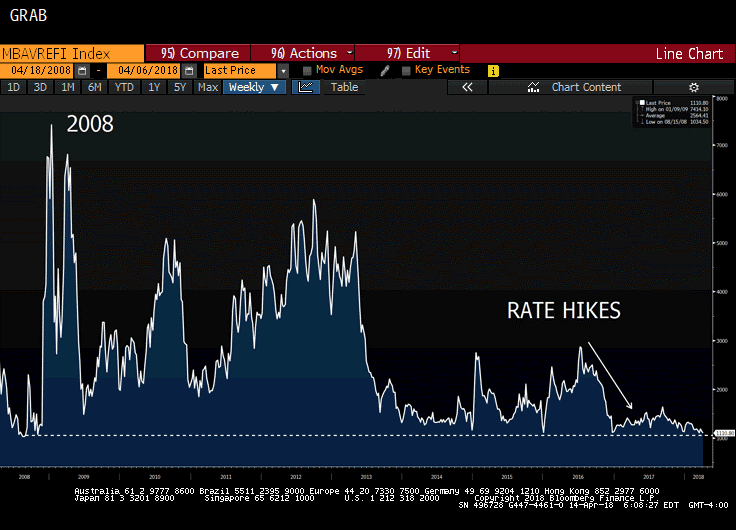 But it isn’t just overextended mom and pops, it’s the federal government, too.  US debt exceeds $21T and the rising interest expense has to come from somewhere.

Interest expense is unsurprisingly at an all-time high and climbing.  How much higher will this graph look if/when the Fed pushes Fed Funds above 3%? 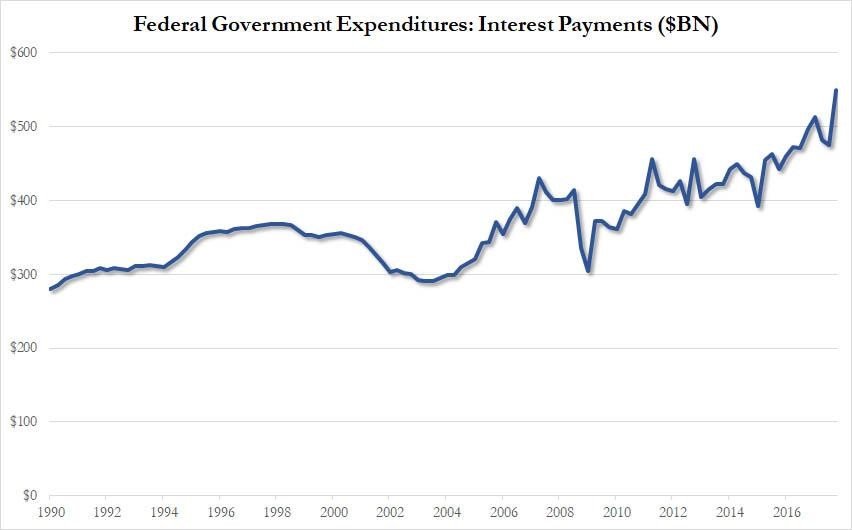 Those yuuuuuge beautiful tax cuts are going to make it tougher to make those payments in a rising rate environment.  Goldman noted an expected financing gap next year of about $300B, which grows to $750B by 2021.  With fewer tax receipts to pay obligations, the US will need to ramp up issuance (borrowing on one credit card to pay the interest on another).

Greater issuance, coupled with the unwinding of QE should put upward pressure on yields, compounding the problem.  In that same report, Goldman estimates the 10T will climb by about 0.50% – 0.70% from deficit and reverse QE alone.

Not only will interest expense increase by nearly $300B over the next year while rates climb, but the Fed’s massive bond portfolio will lose about $2T in value.

If we learned anything from the 2008 crisis, it is that asset value correction is exacerbated by credit restriction.  With rising rates impeding repayment ability, less credit is extended.  Delinquencies and then defaults.  Price correction.  Downturn.

While the economy is doing well now, how much of this growth was created by debt and low interest rates?  And what happens when those are no longer available?  The economic overheating story could be the first step towards the end of the credit cycle.

Thank goodness the CBO feels so confident there won’t be a recession in the next decade, otherwise this sort of thing might scare us.

Quiet week on the data front, headlined by some manufacturing and retail sales data.  Lot of Fed-speakers, with four set to deliver comments on Tuesday alone.

Of course, developments out of the WH will trump anything but the most outlier data print.