The White House has indicated an announcement is forthcoming on the Fed Chair nomination.  It basically boils down to Powell and Brainard.  Their views on rates are largely similar, so I would expect a relatively minor reaction from rate if Brainard is nominated.  If there’s a market reaction:

We put each voting member on a Dove/Hawk spectrum with a very scientific methodology of “he/she seems kinda dovish/hawkish, put them right there.”  That’s the kind of hard-hitting, data driven approach you deserve.

With a median score of 2.5, this year’s voters average 2.45, while next year’s is slightly more hawkish with a score of 2.72.   Biden has three vacancies to fill, so that could change depending on who he appoints.

If the labor market continues to recover at the current pace and it’s broad based and inclusive, we should return to pre-pandemic employment levels in the spring.  That sort of pace may force even the Fed doves to speed up the rate hiking talk.

I hate to keep beating a dead horse, but this is largely due to forecasts of falling GDP and inflation.  Here’s the consensus forecasts among the 60 economists surveyed by Bloomberg each month. 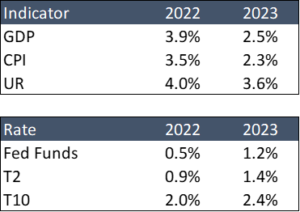 Here’s Bloomberg’s own CPI forecast, hitting 7% in December and January, and then falling pretty quickly through the first half of the year.  In the coming months, the headlines will continue to talk about rampant inflation…but there is a light at the end of the tunnel. 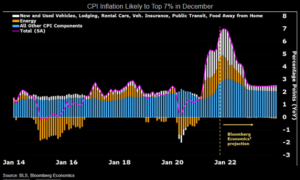 They estimate CPI ends 2022 just over 2.0%.  Forecasts like this are why the Fed is beating the transitory drum and markets are marching to it.

The current T10 range is about 1.45% – 1.70%.  A surprise change to the pace of tapering could maybe cause a breakout, but I don’t see much between now and year end that could cause rates to move dramatically.  Here are the next general technical support/resistance levels.

For a holiday-shortened week, we get quite a bit of data.

On Wednesday, Q3 GDP gets its first revision.  You may recall it came out a few weeks ago at 2.0% and most economists are expecting a slightly positive revision.  Housing and Durable Goods data will also come out before Thanksgiving.

Lastly, the Univ of Michigan Sentiment and Personal Spending will both be rate drivers this week as well.

Markets obviously closed on Thursday.  While technically open on Friday until 2pm, no one actually works.  Don’t be the person trying to trade with a plate of turkey on your lap – you’re better than that.