The Fed’s preferred measure of inflation came in slightly lower than expected. While it is certainly not establishing a trend lower, the market exhaled as the prospect of even higher inflation was temporarily taken off the table.

Michael Burry of Big Short fame tweeted: “This supply glut at retail is the Bullwhip Effect. Google it. Worth understanding for your investing endeavors. Deflationary pulses from this –> disinflation in CPI later this year –> Fed reverses itself on rates and QT –> Cycles.”

So I did Google it. This image popped up and does a good job explaining the concept. 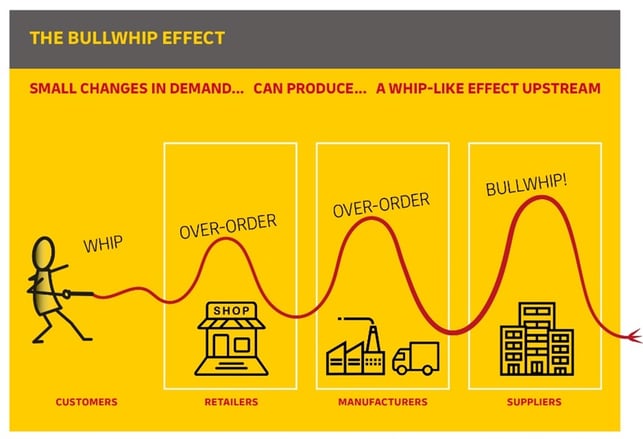 I looked Retail Inventories and sure enough, they have spiked dramatically.

Walmart, Target, and Gap are just a few of the retailers that have recently issued warnings about their inventory levels. They are so overstocked, in fact, that some are turning away returned items. They are still refunding the money, but telling the customer to keep the item as well just so they don’t have to throw it back on the pile of other stuff.

“It would be a smart strategic initiative,” said Burt Flickinger, retail expert and managing director of retail consultancy Strategic Resource Group. “Retailers are stuck with excess inventory of unprecedented levels. They can’t afford to take back even more of it.”

With rents surging, excess liquidity in the system, and oil supply impacted by the ongoing Russian invasion, I don’t think inventories alone will cause inflation to plunge. Cool off, yes. Plunge, no.

But…there’s a significant lag between Fed decisions and the impact it has on data, so this is yet another factor that increases the risk of a Fed misstep.

Inventories…China slowdown…emerging market stress…European recession…cooling labor market…the Fed is aware of all of them, yet can’t back off yet because they need to stamp out inflation.   But inflation is unlikely to plunge this year no matter what the Fed does because those wheels were set into motion a year ago.

In some ways, Fed monetary policy frequently looks like a bullwhip as well. This time is different, however, because they can’t press pause until inflation is broken. This, coupled with the lag, amplifies mistakes. 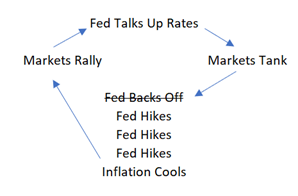 I have to think the Fed is stunned at how quickly markets have puked in response to 1.50% in rate hikes, but they can’t react by pausing like they normally would. The Fed is stuck seeing this through.

In a few short months, we’re already seeing the typical market response from an overheated economy:

The market actually has Fed policy peaking in December, and then reversing course next year. In fact, it has floating rates below 3.0% by next September. 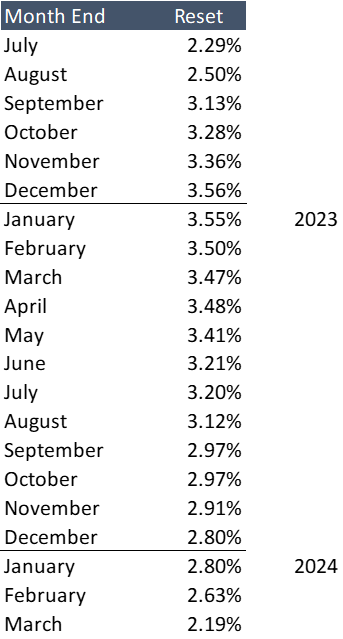 Why? The market is taking Powell at his word that the FOMC will continue hiking rates despite slowing economic data. Inflation will cool, but not fast enough to avoid a recession.

For the first time in a long time, the Fed will be forced to tighten monetary policy as we enter a recession. Speaking of which…

We Are (Probably) Already in a Recession Will this change the Fed’s course? Nope. Not unless there are signs of inflation trending lower.

But even if inflation starts to come back down, it probably means the Fed “only” hikes 25bps instead of 50bps. Or skips a meeting. It does not mean they will stop altogether or reverse course. Those won’t happen until inflation is clearly headed lower.

Big things this week will be housing data, PMI/ISM and FOMC Minutes on Wednesday. Labor market data will be released to close out the week with NFP leading us into the Friday open.

I read a lot a last month about the “resilient” job market because we still added 390k jobs (never mind it was the first <400k gain in a year). The consensus forecast for Friday’s report is a gain of 273k and I can see headlines suggesting continued strength in the face of tightening conditions.

I call bs. Hiring doesn’t turn on a dime and if we have a reasonably strong print, I will be unimpressed. Instead, talk to me in the fall when companies have had time to adapt.

Like inflation, I do wonder if job openings will fall faster than expected over the next year as companies grapple with a prolonged slow down or outright recession.