Deflation (and maybe something about the protests)

This one is going to get a little uncomfortable.  If you want to skip ahead to the rate stuff, click here.

Our 12 year old was asking a lot of very deep questions about the protests this week.  How could people protest the police?  They keep us safe.  They come to his school and give students high fives in the hallways.  They even let his dad off the hook with just a warning from a speeding ticket on a long drive home from the beach…

“Why would the police treat black people differently than white people?” he wondered aloud while eating his pancakes.

Now we were in the middle of it.  I’ve had The Talk with four out of five of the kids and I think I’d prefer to do those all over again than to head down this path.

I blame coronavirus.  We should have been at a sports tournament or something, too busy to have time for difficult discussions…and while I say that tongue in cheek, I also wonder if this movement has captured our attention, in part, because we have time for our attention to be captured?

This is normally when I would dive into the stats.  But I was afraid the message would be lost if I threw a bunch of numbers at them.  This is an emotionally charged issue.  I’m uncomfortable writing this, and you are probably uncomfortable reading it.  But in this case, the statistics may dehumanize the issue.  And I think that is part of the problem.

Heart racing, chest tightening up, I asked, “If that’s true, do you think black people commit more crimes than white people because of the color of their skin?”  They were unsure.

I continued, “You were raised in a gated community with two loving parents and the blessing of never wondering if you were going to have enough food for dinner.  We stay on top of you about doing well in school.  You have your own car.  You participate in a million activities.  Your teachers email us daily about how things are going.”

“Compare that with a kid your age that has been raised in a house without all of that.  Is it possible that you are less likely to commit crime because of the environment in which you grew up?”   No response.  I decided to use one of their buddies down the street, Kawan, as an example.

“OK, how about this – you and Kawan play in the pool together.  You guys have sleep overs.  Do you think he is more likely to commit a crime than you?”   No, of course not.  Kawan is awesome.  He’s super nice.

“Now think about a really poor neighborhood.  Two kids live next to each other, one white and one black.  They have both lived there their whole lives. They grew up playing with each other every day.  Is the black kid more likely to commit a crime than the white kid?”  I directed this to my 16 year old.  No, probably not, he conceded.

“But are they both more likely to commit a crime than you?”  He thought for a moment and said, yes.

“So, maybe it’s not really about the color of our skin. Maybe it’s about the environment and experiences that shape us.”  I wasn’t sure if they were actually listening through the chewing.

“Would you agree that those two kids, growing up side by side, one white and one black, have the same likelihood of committing a crime?”  Yeah, they seemed to agree.

And that’s what the protests are about.

If my son’s life was dependent on how that interaction with the police officer was about to go, would I have him switch places with Kawan?  Not in a million years.

And that’s what the protests are about.

And that means I know it.  I am aware of it.  And I haven’t done anything about it.

Our experience with police has been great.  They have been more than fair. They’re friendly.  They’re servants of the community.  But we can’t project those experiences onto everyone.

I haven’t been listening.  And that inaction has consequences.  I’m not excusing looting or rioting, but I have to be honest with myself and wonder if I would really be that much different if the roles were reversed?   If police had a track record of killing suburban white teenage boys in Charlotte over minor crimes, and one of my sons died while in police custody, how measured would my response be?

Are white people killed by police?  Absolutely.  But I haven’t seen a video of a police officer choking out a white suspect over buying cigarettes with fake money.  Police responses to whites and blacks are not proportionate for minor crimes.   A white suspect and a black suspect fleeing a murder scene with a gun in their hand – I bet the police responses are pretty similar.  But a white man and a black man selling individual cigarettes on a street corner?   Or getting pulled over for speeding?  The odds of dying are much higher for one of those men.

I don’t want police disbanded.  I want us to stop asking the world of them.  I have friends that are police officers, both local and federal.  I have always told them how much harder their jobs are than mine was in the Army.  We kicked in doors and anyone on the other side was a bad guy – it was very straightforward.  They kick in doors and then have to figure out who the bad guys are.  And then figure out who to arrest.  And decide how much force to use.  And then get armchair quarterbacked by people like me.

Think about how much baggage they might be bringing to each call because we are asking too much of them.  How do you transition from a call about a vicious assault to issuing a traffic ticket?  From arresting a drug dealer to simply standing at the entrance of a Friday night football game?  What can we do to allow them to focus on really serving the community in the ways that led to them becoming police officers in the first place?

I continued with my sons, “Now I want you to close your eyes.  Think about the poor kid without involved parents. Without tutors.  Without a car.  With drugs all around.  I want you to really paint a picture of him in your mind, standing in his front door looking out at his neighborhood.  He lives where police in schools check for weapons and don’t give out high fives.  He doesn’t get to play sports every weekend.  His older brother is in jail.  When he plays outside, he worries about hearing gun shots.  He doesn’t take family vacations.  Surrounded by crime, hearing sirens every night…are you picturing him?”  Yes, they nodded.

“Now imagine he’s white.”  They opened their eyes.  If you were like them or me, you were picturing a black person.

And that’s why there are protests.

Using tear gas on American citizens?  Throwing bricks at Secret Service agents?  Arresting peaceful protestors?  Throwing fireworks at police officers?  Are both sides are so tightly coiled right now that violence is an unavoidable outcome?  How do we de-escalate?

Maybe we start with a willingness to at least consider the other side’s position.  Maybe it’s a thought exercise as simple as the one I went through with my own kids this week.

If you’re a Trump supporter, I would ask that you demand more of him.  He can’t use the military against American citizens.  He needs to stop contributing to the divisiveness.  Stop being intentionally antagonistic.  He scheduled a rally in Tulsa on June 19th.  He rolled back LGBTQ protections on the anniversary of the Pulse shooting.  These are not coincidences.  He’s not even pretending anymore.  Demand better.

If you’re a Democrat, acknowledge that Hillary was wrong and that Trump supporters aren’t “deplorable” just because they have different concerns than you.   That having a college degree doesn’t make you superior.  That you will absolutely want someone to answer your 911 call.  And that if you were wearing a uniform, you might be a little on edge if you were sent to a protest and had things thrown at you.

That’s what the protests are about.

That makes me American.

When I’m teaching a college class, I will frequently ask why the Fed would want 2.0% inflation rather than no inflation.  Shouldn’t flat prices be a good thing so I can keep on affording things?  They tend to agree.  Then I ask, “Then shouldn’t we want falling prices?  It will make things more affordable.”  They can sense a trap, but are unsure of how to avoid it.

The ultimate answer is that falling prices impact current demand.  If I believe prices will fall, I will hold off on buying something.  That, in turn, impacts the economy and drags down GDP.

Powell said the Fed isn’t even thinking about raising rates.  The implication is that he is far more concerned about deflation than inflation.  Rightfully so – prices are plunging. 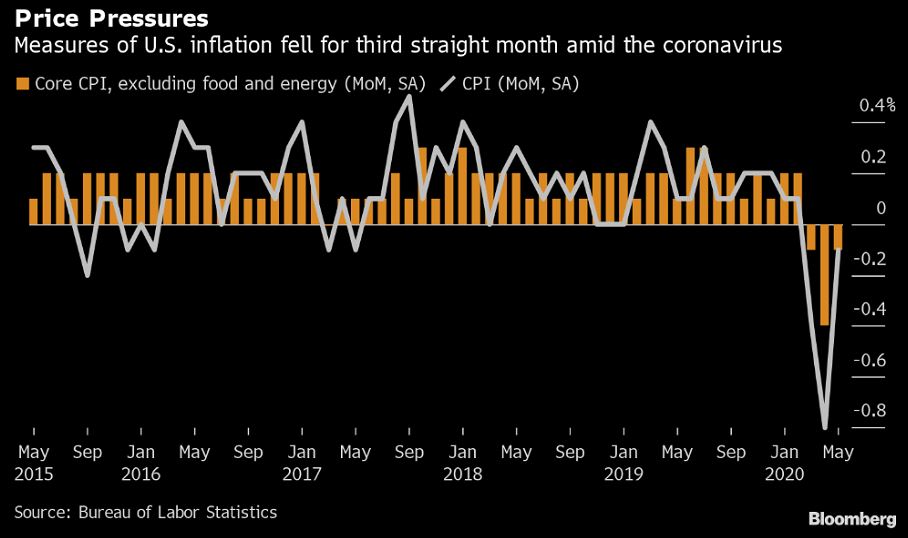 Here’s the Fed’s preferred measure of inflation, Core PCE.  It’s back down to 1.0%, matching levels last seen after the Financial Crisis.  This is why the Fed will be on hold for a long time.

How about future inflation expectations?  Well below the targeted 2.0%.  And inflation is one of those oddball self-fulfilling prophecies.  If we don’t expect inflation to increase prices, we don’t rush out to buy stuff…which in turns keeps prices down…which in turn keeps inflation down.

This has an impact on the US housing market, as well.  Not only does demand dry up, but if I’m one of the lucky ones who is willing and able to buy a house, maybe I hold off and see how much more prices will drop?

Two thirds of GDP is comprised of consumer consumption.  The weird thing about personal consumption is that it is generally pretty stable, even in deep recessions.  Over the last 60 years, the lowest point has been -1.5%.  Here’s a graph up through the start of this year.

But stretch that graph out until June and we are in truly unchartered waters right now.

We’ve never seen a demand-side shock like this before.  Nothing even remotely close.  And that’s why Powell et al aren’t the least bit worried about inflation right now.

Could the massive FOMC accommodation lead to unprecedented inflation?   Of course – we have no roadmap for this type of situation.

But will it come in the next year or two?  Unlikely.

Who knows at this point?