The market is pricing in a Delta Downturn, plain and simple.   Surging cases, hospitalizations, political responses, etc.  We highlighted this a few weeks ago, but it bears repeating – buying sentiment has plunged. 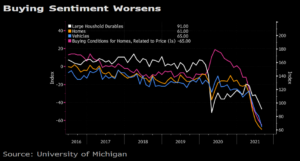 According to the UofM survey, an “aversion to higher prices caused consumers to judge buying conditions negatively: favorable ratings fell to just 30% for homes, 31% for vehicles, and 43% for household durables—all were the lowest since the 1980 recessions. This distaste was greatest among households with incomes in the top third, who represent over half of all consumer purchases. Importantly, price hikes by sellers need to be confirmed by buyers before those hikes enter into the various inflation gauges.”

This is bad news for GDP since consumer spending comprises 2/3rds of GDP.

Retail Sales this week could be the canary in the coal mine.  The consensus forecast is a flat print (0.0%) after last month’s 1.1% gain. 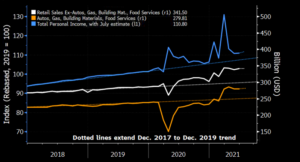 The Port of LA is already experiencing a dip as result of China’s partial shutdown of Ningbo-Zhoushan, the world’s third busiest port.  There are currently 28 container ships anchored outside that port awaiting berth.  Port calls have dropped from over 200 ships to 60 ships in one week. 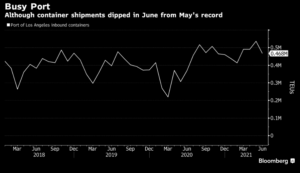 Consumer appetite, coupled with supply chain disruptions, and the market has to respond.  If the 10T drop two months ago was technical in nature (short covering), this move is more fear based.

We know so much more than we did 18 months ago.  Although the vaccination rate isn’t ideal, it’s at levels that should put a huge dent in the delta impact.  The government (and the Fed in particular) has demonstrated a willingness to backstop everything.  The political (over)reaction is perhaps the greatest threat.  But I get the sense that Americans are less willing to go along with blanket shutdowns than they were a year ago.  Perhaps Cali will be our test run?

Last year, Morgan Stanley hired a biotechnologist, Matthew Harrison, who last week wrote, “with new cases in the US reaching ~120K/day, investor questions are centered around the timing of the new peak in cases. Based on the reproduction rate trajectory, US/UK hospitalization relationship, and previous peaks, we expect the next peak to occur in about 1-2 weeks.”

If the surge runs out of steam, so should the market’s fear.

JPMorgan’s Marko Kolanovic agrees, saying the recent surge “makes us believe that the US inflection is days away, and that bond yields and cyclicals bottomed last week.”

A trader(s) loaded up on tail risk options to profit off an extended Fed pause last week.  These contracts pay out if the Fed hasn’t hiked by the end of 2024 and the number of outstanding positions spiked from 22k to 153k.

There was also an increase in positions that benefit from a negative LIBOR.

While most pundits are suggesting a hike earlier than expected, at least one trader is loading up in the opposite direction.

Powell speaks at a virtual conference Tuesday, but he’ll avoid making headlines – especially with Jackson Hole on the horizon.

More importantly, minutes from the most recent (and slightly hawkish) FOMC meeting are released this week.  The market will try to read between the lines for clues about the start of the tapering, but I wonder if the Covid headlines over the last week make those Fed discussions stale.  Although I don’t think the actual start date matters much, I still think official tapering doesn’t begin until after January 1 (although the roadmap will be made public before then).