Dissention at the FOMC – Signal or Noise?

As expected, the FOMC raised the Federal Funds Rate to 1.25% – 1.50% at their meeting this afternoon. LIBOR is at 1.48% today, and will likely rise some more tomorrow. Rates fell this morning ahead of the meeting on weak consumer inflation, as markets were concerned that the Fed may take a more hawkish stance, which would risk pushing the US into a recession. We’ve shared this same concern before, as the Fed keeps raising rates despite a flattening yield curve.

Why Rates Fell – The Boring Part

With nearly 100% probability priced into rates, there was never really any doubt that the Fed would hike. What the market was waiting for was the release of the Dots. Also known as the “Dot Plot” or “Blue Dots”, this chart outlines individual FOMC members’ forecast of appropriate monetary policy. This was largely unchanged from September, the only variance being one extra rate hike projected in 2020. 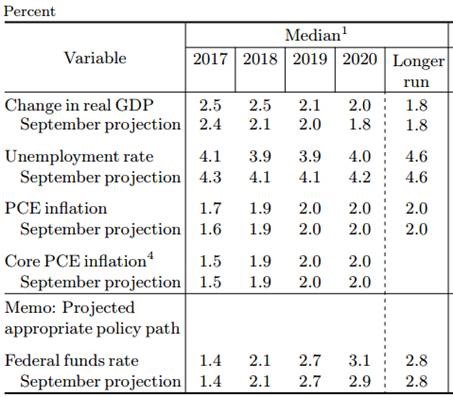 The Fed was clear in their forward guidance that the path of rate hikes was largely unchanged, and they expect the economy to improve at a more rapid pace. So why did rates fall? The last time this happened (June 2017), it was because of all the boring technical information. Markets were concerned that the Fed was being too hawkish in the face of a flattening yield curve, and responded with a flight-to-safety. While this certainly played into today’s market reaction, there was a much more interesting twist to the drop…

Why Rates Fell – The Interesting Part

For the first time in this tightening cycle, two of the 10 voting FOMC members dissented against the policy decision: Minneapolis Fed President Neel Kashkari and Chicago Fed President Charles Evans.

This isn’t the first time Kashkari has dissented. He’s cautioned against raising rates too quickly numerous times, and has championed holding off on further hikes until inflation catches up to target levels. He even published a paper earlier this year explaining why he dissented at the March Fed meeting, saying that he thinks inflation should be allowed to catch up before hiking further. His view has run counter to most Fed officials, who believe that the tightening labor market could risk overheating if the Fed doesn’t raise rates.

Evans joined Kashkari in the dissenting vote for the first time this afternoon. While Evans has voted in favor of every rate hike up until this point, his recent commentary has trended dovish. Recently, Evans stated that he is worried about the pace of inflation, and questioned why the FOMC seemed to be in such a hurry to raise rates. “Is there really a hurry to raise rates?” he asked in an interview. “What if we just decided to wait until the middle of the year and if we saw inflation pick up, then we could do something? I would say at the moment I think the current decision is really a judgment call.”

What makes having an extra dissent important? Markets interpret this as a sign that further rate hikes will face increased friction from within the Fed if 1) inflation doesn’t pick up, or 2) the yield curve doesn’t steepen. We’ve said several times that the flatness of the yield curve will make it difficult for the Fed to hike, which makes the current Fed forecast of three hikes in 2018 seem unlikely. Don’t be surprised if we start to see more Fed members dissent future rate hike decisions.

So, are the two dissenting votes at this meeting a sign of things to come, or just noise from a couple of outsiders? We’re inclined to think signal, but we’ve been wrong before. There will be a lot of new factors at play next year, including a new Fed Chair, a new tax code, and possibly the removal of some accommodation by the ECB. We’ll have to wait and see how these affect Fed action.