The End of the Tightening Cycle?

LIBOR continues its march higher and reset Friday at 1.38%, the highest level since December 2008.  With markets pricing in a 100% probability of a hike on December 15th, it will likely keep pushing towards 1.50% by year end.  Couple the tightening cycle with typical year end liquidity issues, and LIBOR could break 1.50% by the end of the month.  The market has another hike priced in March.

The 10 year Treasury had jumped early in the week on news of progress on tax reform cuts and better than expected GDP.  This was completely erased Friday on news that Flynn pled guilty to lying to the FBI and was cooperating with Mueller’s investigation.  More importantly, ABC News reported that Flynn would directly implicate Trump.  The fear of a Constitutional crisis threw rates into a nosedive and the 10yr Treasury dropped 10bps in a few minutes.

The ABC News report turned out to be erroneous (fake news!) and the 10yr rebounded 5bps to close out the week at 2.36%.

While tax cuts and strong economic data help contribute to the momentum of higher rates, the fear of Mueller’s investigation implicating the president’s inner circle are keeping a lid on the movement.

We can’t help but wonder if the value of Trump to the GOP is dropping daily.  Once tax cuts become formally approved, how much do Ryan and McConnel need Trump going forward?  They have tolerated him thus far for two reasons: 1. Fear of retribution from his base, 2. Fear of GOP agenda failing.

As odds of Trump’s involvement with Russia increase and the GOP’s use for Trump decrease, we could hit a tipping point where Republicans throw Trump to the wolves.

PredictIt has a 41% probability of Trump being impeached and the odds of Trump still being president at the end of 2018 at just 63%.  Another betting site, Ladbrokes, has the same likelihood at 64%.

Despite the recent oscillations, 10 year Treasury volatility remains incredibly low.  Volatility has been artificially depressed with massive accommodation.  As that accommodation is removed, volatility should increase.  We should experience more days of +/- 10bps movement in 2018. 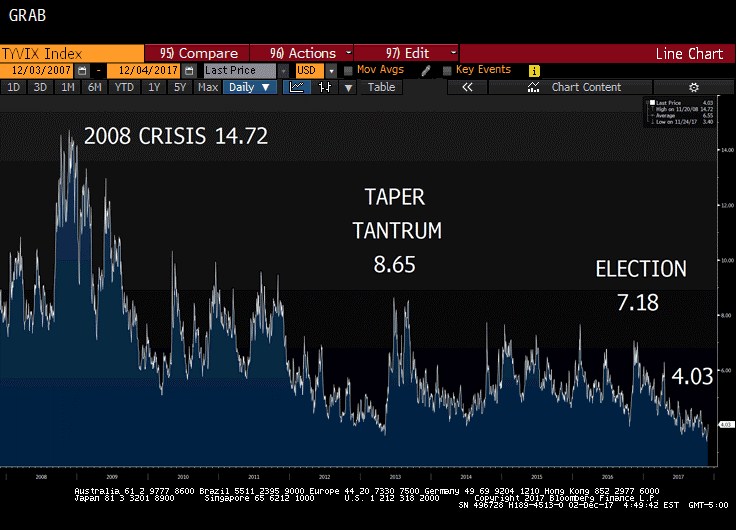 In addition to the flattening yield curve, low inflation (using the Fed’s preferred measure of Core PCE) could handcuff the FOMC from multiple rate hikes in 2018.  While the Fed keeps claiming inflation should return to 2.0%, the fact is that it hasn’t.

The longer Core PCE remains depressed, the tougher it will be for the Fed to hike in 2018. 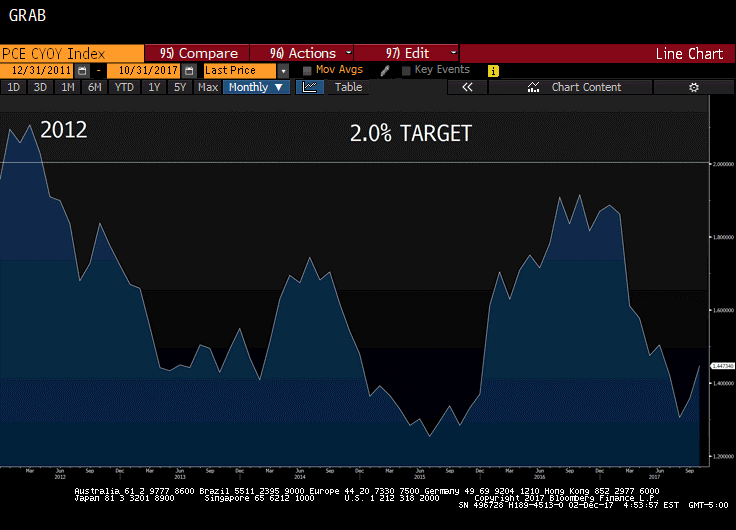 Furthermore, isn’t it possible that the rate hikes over the last two years are working?  Here’s the same Core PCE graph over the last three years and illustrating the inflation trend vs rate hikes.

If Core PCE keeps climbing towards 2.00%, the Fed can keep hiking.  But if inflation continues to stall, it will be difficult for the Fed to justify additional hikes. 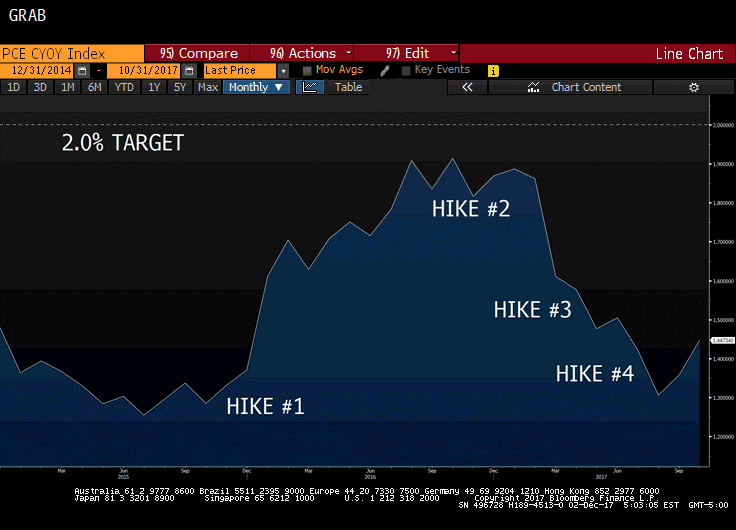 We’ve been banging on this drum for nearly two years now as a primary reason why the Fed can’t hike aggressively even if they wanted to – the spread between the 10 year Treasury and the 2 year Treasury is the lowest in a decade. 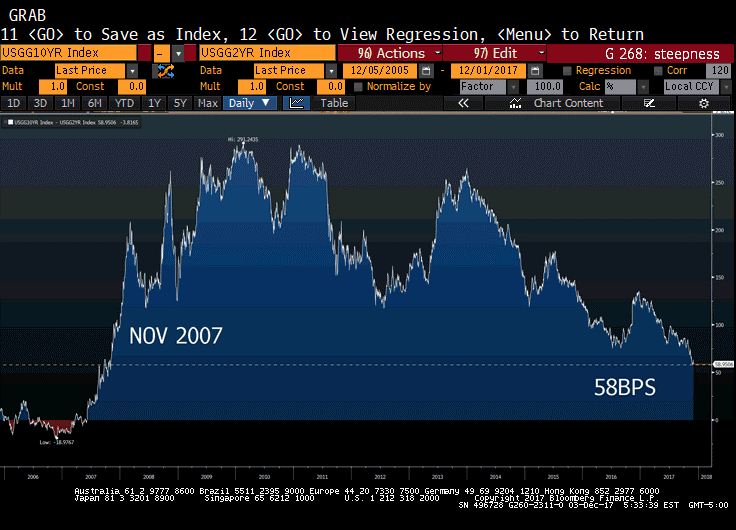 Notice how the yield curve has flattened since the Fed started hiking in December 2015.

Hike #2 came after the election and the 10 year Treasury had spiked above 2.50%.  Since then, however, the 10yr Treasury has refused to climb in lockstep with the 2 year Treasury and the curve, therefore, flattens.

The flatter the yield curve, the more discussions around a possible inversion.

Can the Fed keep hiking if the 10 year Treasury doesn’t climb? 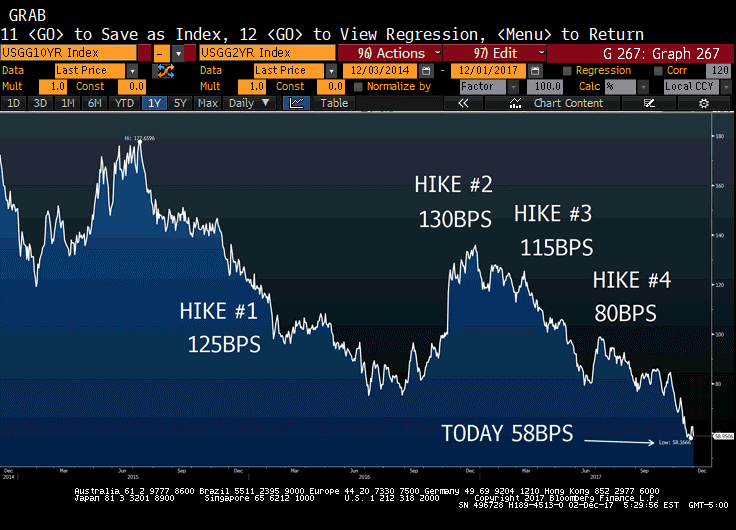 The last time the yield curve was this flat was November 2007, but rates were going in a different direction then.

In late 2007, the yield curve returned to a positive slope only because the FOMC was slashing Fed Funds faster than the long end of the curve could keep up.  As the Fed drove the front end down, the yield curve steepened even though rates were falling.

In other words, front end rates were dropping faster than the long end of the curve.  Therefore, comparing today’s flattening to Q4 2007 is a bit misleading. 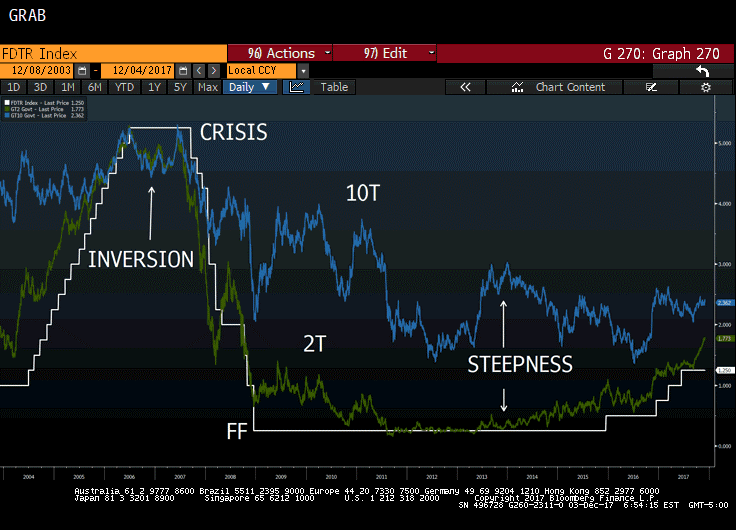 Today, the flattening is more akin to the 2004-2005 timeframe as the Fed hiked 25bps every meeting.  This tightening pushed the 2 year Treasury higher, but the 10 year Treasury refused to play along and move higher with it.

This flattening played out in the two years leading up to the inversion in late 2005. 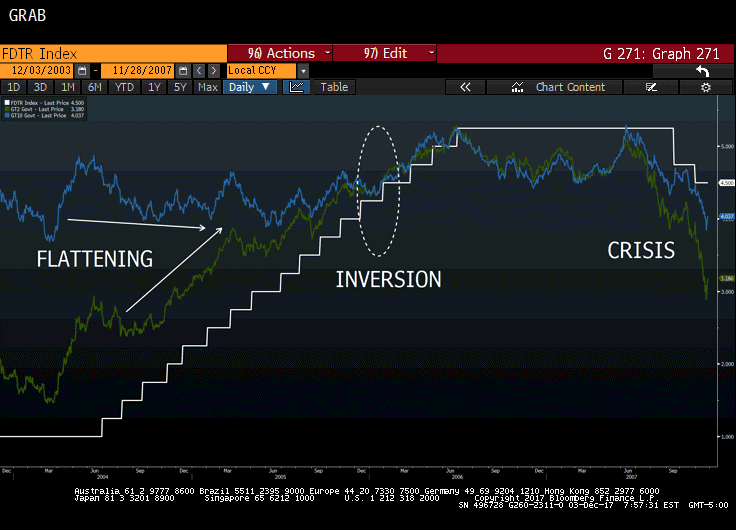 Can the Fed Steepen the Yield Curve?

As previously mentioned, the Fed struggles to exert control over the long end of the curve, but that doesn’t mean it has no control.

If the Fed wanted the 10 year Treasury at 5.00%, it could do so by actively selling its Treasury holdings.  Unfortunately, the subsequent rate movement would not be a controlled one.  Full blown panic would flood the market as the biggest holder of Treasurys became an active seller, and so the Fed may not be able to dictate whether the 10 year Treasury hits 4.00%, 5.00%, or 6.00%.  It could become a runaway freight train.

That leads us to Passive Tightening, aka Reverse QE, aka Balance Sheet Normalization, all terms to describe the current plan of simply not reinvesting maturing proceeds.  As discussed in previous newsletters, the general consensus is that the prescribed pace should result in upward pressure on yields to the tune of 0.25% per year.

The Fed could also announce another Operation Twist, where the intent is to twist the shape of the yield curve.  You may recall this term from 2011 when the twist was intended to push down long end rates and rate short term rates.  The opposite can be done, with active selling of long ends bonds, but again the risk is the market presses a panic sell button.

Because the Fed has better control over the front end of the curve, we think it will focus here.

What if the Fed hikes in December and couples it with a statement that decreases odds for hikes in 2018?  What if it does something more dramatic and promises no rate hikes for two years?  The 2 year Treasury would drop back down to 1.50% and the yield curve would steepen by 0.25% even if the 10 year Treasury doesn’t budge.

To be clear, that’s not happening December 15th.  This is likely Yellen’s last hike and she’s not going to make a commitment like that right before she hands off the Fed to Powell.  But you get the idea.  Powell may very well soothe markets in Q1 2018 by reassuring a very gradual pace of hikes.  While the current FOMC projections suggest three hikes in 2018, the Fed could slowly back that down to two or even one hike and steepen the curve.

The yield curve could also steepen if inflation expectations start rising while the Fed remains dovish.

We may very well be nearing the end of the tightening cycle, with the Fed switching its focus to the long end of the curve and waiting for the 10 year Treasury to move towards 3.00% before hiking anymore. 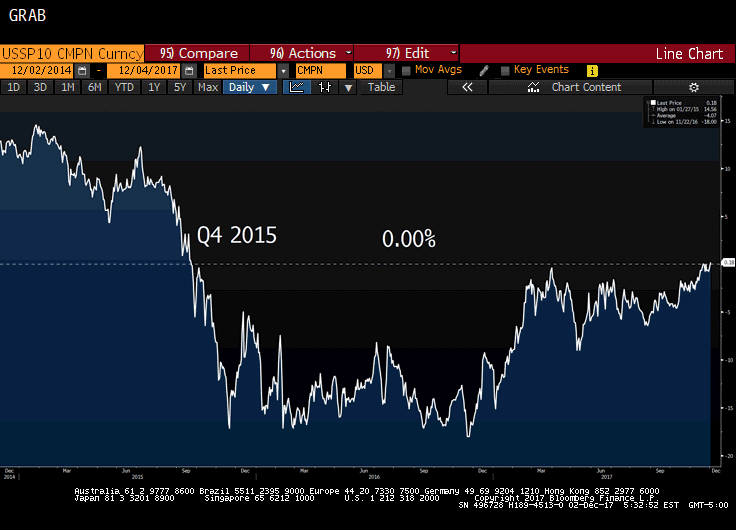 We wrote the Not Very Definitive Guide to Negative Swap Spreads (Click Here).  Here’s a brief recap of what contributed to negative swap spreads:

We wrote, “Not one trader I spoke with thought this was a short-term aberration.”  That was two years ago.  Last week, 10 year swap spreads flipped positive, albeit just barely.  We will be releasing a more in-depth analysis, but for now the leading culprit appears to be less regulation.

Normally, Friday’s job report would be the headliner, but not with taxes, Russian investigation, and the next week’s FOMC meeting in the spotlight.  We might see some intraday gyrations, but it’s tough to envision NFP or the unemployment rate causing the range to break.

Fed speakers should be mostly quiet ahead of next week’s FOMC meeting.