Markets were closed yesterday, so you get a special Tuesday edition of the newsletter!  How lucky are you!?

For the first time in more than 30 years, the Treasury will issue 20 year bonds. No more interpolating!

The Treasury has been tossing around ideas to help fund the $1T budget deficit (remember, the GOP is the party of fiscal responsibility only when Democrats are in power).  The new issuances are expected to begin in May.

Assuming the Treasury uses this as new issuance, rather than replacing, say, a 10 Year Treasury auction, this translates into more supply, which implies higher yields.  It shouldn’t have a big impact on yields, but it may help steepen the curve.

One other side effect may be on SOFR.  Rumors had been mounting that the Treasury could use SOFR-based floaters to help fund the deficit.  While this announcement about 20 year bonds doesn’t completely eliminate that, it certainly impacts it.  SOFR-linked Treasurys would have bolstered arguments for the 2021 transition kool-aid drinkers.

Before you send me hate mail, remember that I like the idea of transitioning to a market driven index.  I don’t doubt the regulators intentions, I doubt their timeline.

I hope it was worth it.  After two years, we finally have a non-binding truce on the trade war with China.  Yay?

China’s commitment is a pinky swear promise to try to buy more stuff from the US over the next two years.  What a deal.

The biggest near-term benefit is psychological.  De-escalation should help calm markets and remove that trade war dark cloud hanging over our collective heads.  Throw in the recent rate cuts and we are seeing two of the biggest risks being tabled for now.  That sets the stage for higher fixed rates.

But the framework of the deal is…optimistic….to say the least.  According to a Bloomberg report: 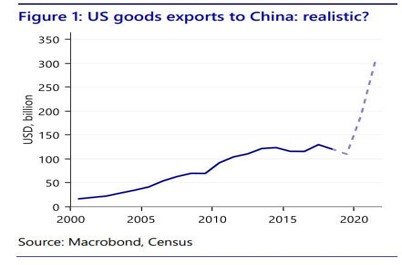 Furthermore, tariffs remain on $360B of Chinese imports and China did not commit to removing its own retaliatory tariffs.

The protracted war has taken its toll on the economy, with consensus forecasts for 2020 in the 1.5%-2.0% range.  According to Cass Information Systems (this is the firm calling for a recession to begin this quarter), shipment volume fell for the 13th month in a row and experienced the sharpest decline since November 2009.  They refer to this as a Freight Recession. 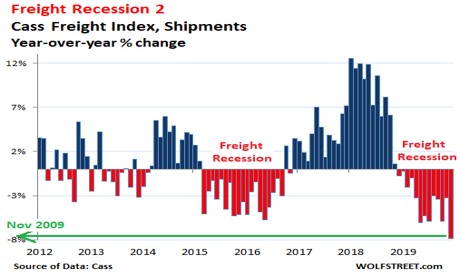 A similar effect has been felt in manufacturing, which has fallen into a Manufacturing Recession.

I was asked by a client on Friday what the next bubble is.  If I knew, I would be writing this from my private island instead of a Marriott hotel lobby in Raleigh at my kids’ volleyball tournament. The only real conviction I have is that it will be Fed driven.  Monetary policy is creating asset bubbles, I just don’t know which one will implode first.  If Fed monetary policy causes the bubble, lack of liquidity will be what bursts it.

Despite historically low unemployment and historically high equities, the Fed had to cut rates and flip the switch back on for QE.  We are hooked on accommodation and I’m not sure how we extricate ourselves.  Ten years from now we may look back fondly on the days when we bothered trying to number rounds of QE because it has just become a normal part of business.

While the Fed refuses to call the recent repo operations QE, judge for yourself.  Since mid-September, the Fed’s balance sheet has grown by more than 10%.  Regardless of what the Fed is calling it, the market sees it as QE because look at what stocks have done since then.

And if you don’t think Jamie Dimon is pulling the strings behind the scenes, consider that JPM withdrew over $150B from excess reserves held at the Fed in the first half of 2019, nearly one third of the entire overnight repo market.  JPM put that cash into bonds, a defensive move normally taken ahead of a recession.

A more cynical observer might also wonder if Dimon orchestrated the repo seizure…knowing the NY Fed would bail out the system and initiate QE4…boosting JPM Q4 profits by more than 21%…boosting JPM bond trading profit by 86% to more than $3.4B…boosting his own net worth by more than $250mm…

But I digress…back to the original concern.  The market is addicted hooked on debt, fueled by a Fed that keeps rates low and turns on the printing presses at the first hint of trouble, leading to yield grab.  Check out this graph from RIA that illustrates total leverage against the S&P.

I typically find John Mauldin too pessimistic for my taste (ironic, I know), but he recently summarized my concerns far more eloquently than I could.

“In just the last 10 years, the triple-B bond market has exploded from $686 billion to $2.5 trillion—an all-time high. To put that in perspective, 50% of the investment-grade bond market now sits on the lowest rung of the quality ladder.” 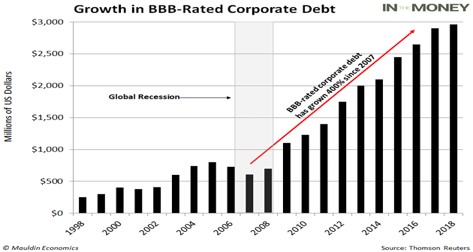 “Coordinated monetary policy is the problem, not the solution.  And while I have little hope for change in that regard, I have no hope that monetary policy will rescue us from the next crisis.

Let me amplify that last line: Not only is there no hope monetary policy will save us from the next crisis, it will help cause the next crisis. The process has already begun.”

Light week for economic data, but the billionaire club has its annual get together in Davos, so expect to see a lot of opinions being spouted on CNBC this week.   I would also expect some continued volatility as the market tries to figure out how it feels about the trade war truce.