The Fed’s current plan seems to push up rates to about 3.0% and then to pause, which would mean five more hikes from today.  Powell did note in his press conference that the Fed is projecting Fed Funds above 3.0% in 2020, which would be viewed as a modestly tight monetary position.  He also cautioned that projections two years and further out should be taken with a grain of salt because of how much can change between now and then.

Whether the Fed hikes two vs three more times this year could be splitting hairs.  It may be better to think about LIBOR moving towards 3.0% by the end of 2019 rather than whether it ends this year at 2.25% or 2.50%.

Perhaps the key takeaway from the FOMC meeting was the upwards revisions to economic forecasts.  Every key forecast the Fed publishes in its SEP was strengthened.

From that graphic, pay attention to a few things:

There also seems to be an incongruity imbedded in these forecasts (incongruity means inconsistent or not in harmony – I had to look it up, don’t judge).  The long run unemployment rate is 4.5%, while the 2019 and 2020 forecasts are at 3.6%.  In order for the unemployment rate to jump back to the long run equilibrium would require a recession.  Let’s assume that doesn’t happen over the next two years.

The last time the unemployment rate was 3.6% was 1966, which led to inflation spiking.  How can the Fed simultaneously forecast 3.6% unemployment and inflation at just at 2.1%?

What if inflation really jumps in the coming years?  Does the Fed have to hike more aggressively than projected?  In turn, would that increase the odds of a recession?

Alternatively, what if inflation actually does remain benign despite a 3.6% unemployment?  Will the Fed intentionally engineer a recession to push the unemployment rate up towards its long run equilibrium of 4.5%?  We are approaching unchartered territory. 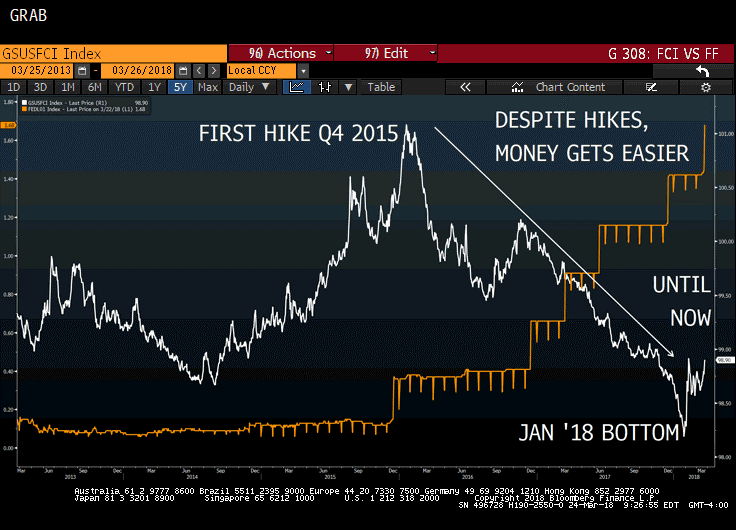 Bigger picture, the situation isn’t dire yet.  Here’s that same index over the last ten years.

But it does suggest two things:

If we concede the Fed isn’t hiking to stem inflation, maybe the real goal is to control financial conditions.  Perhaps behind closed doors, the Fed watched conditions ease despite repeated hikes and concluded they had to keep hiking.

This would also mean the Fed may flatten the trajectory of hikes if financial conditions tighten enough before Fed Funds gets to 3.0%.

The Overnight Indexed Swap rate, or OIS, is effectively the rate for each central bank’s benchmark index.  In the US, that is obviously Fed Funds.  Simplistically, the OIS curve is a forward curve for Fed Funds.

If Fed Funds is considered risk free, and LIBOR represents the credit premium of unsecured lending between banks, then the spread between the two represents a good snapshot of the health of the financial sector.

This spread has gapped wider recently, signaling a potential increase in risk in the banking sector. 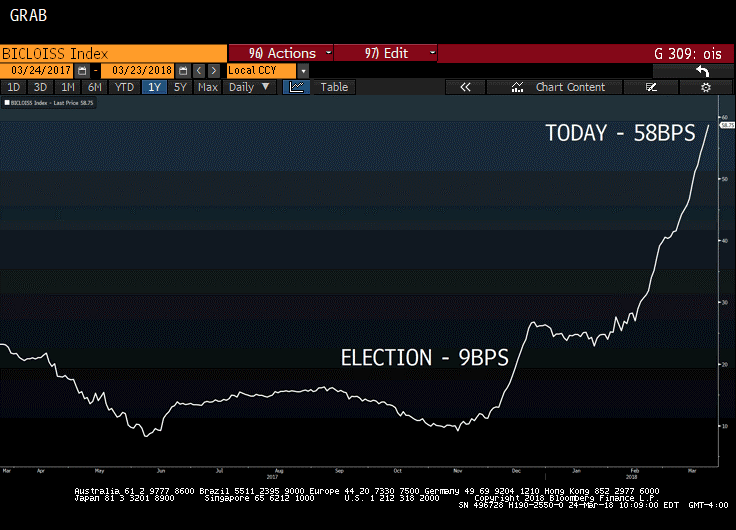 Much like the financial conditions index graphs from above, the bigger picture isn’t quite so scary.  But all big upward movements first had to start as small upward movements, didn’t they? 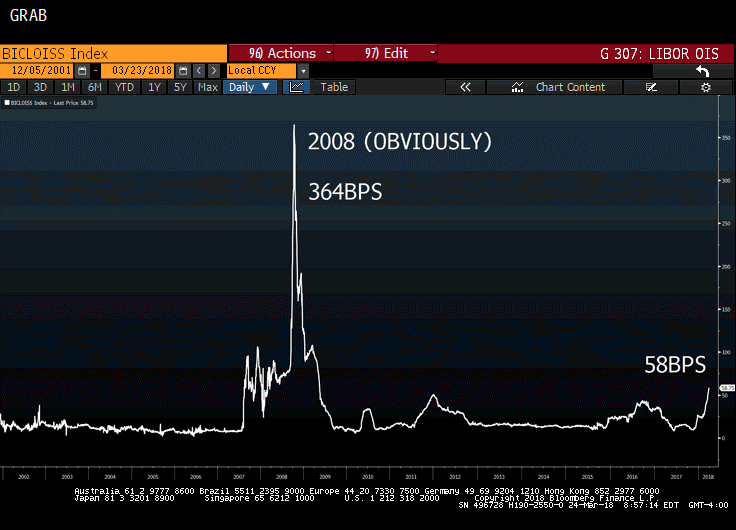 There could very well be some relatively benign explanations, such as the reduction in banking regulations translating into greater risk premium.  That’s the same explanation on why swap spreads have climbed above 0%.

Regardless of the reason, however, there is no doubting that the banking sector is experiencing upward pressure on funding costs.  Should this continue, it would no doubt compound the effects on the tightening financial conditions illustrated in the graphs from above.

The Fed may find itself tightening financial conditions faster than desired and engineering a recession.

We believe the Fed wants to push Fed Funds to 3.00% or slightly above, but we see a lot of warning signals that suggest that may not be possible.

We’ve spent a lot of time talking about the Fed pushing us into an inverted yield curve and inviting a recession, but one other thing to keep an eye on is the level of real interest rates.

Accounting for inflation, real 10 year rates are at their highest level in 7 years.  Is the economy well positioned to absorb a material movement above current levels?  Or will the sell-off in equities continue and the Fed be forced to pull back? 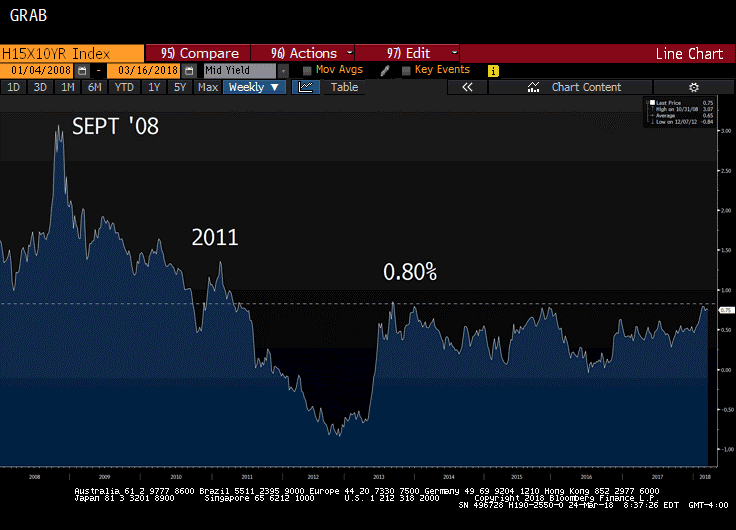 Very busy economic data week, headlined by the Fed’s preferred measure of inflation – Core PCE.  Last month’s release revealed a 1.50% increase, higher than the previous month but still well below 2.0%.  Consensus forecast is for 1.6%.  A surprise to the upside could cause front end rates to jump and drive cap costs up.  A surprise to the downside, however, probably doesn’t have the same impact.  The Fed seems intent on hiking for now, and a slightly weak inflation report is unlikely to dissuade them from hiking in June.