I took a break from the newsletter last weekend because I spent the weekend traveling to see family for Mother’s Day.  On Saturday, we flew to PA to visit my parents.  Because of their extremely, extremely advanced age…and I cannot stress enough how shockingly old they are…they fit the at-risk category and have been taking social distancing very seriously.  We were the first people they had visited with in person since mid-March.

My sister and her family came over with their three lil petri dishes dressed up as toddle-aged boys and we had a nice visit in the 55°, rainy Lancaster weather.  My parents stayed in the doorway of the house, while the rest of us practiced social distancing on the porch.  My dad mostly lurked in the corner, using my mom as a human shield.  Between the two of them, he is the more paranoid cautious of the two.  He’s also the man that taught me that Penn State can give away a fourth quarter lead to Ohio State, no matter how big or how little time left, so it could actually be the appropriate level of caution.

As the three generations of us talked, it dawned on me that we were each self-regulating based on our perceptions of the risk.  My parents were keeping their distance, particularly from the little guys.  My sister, her husband, and the wife and I were cognizant if not entirely obsessed with six feet of separation.  And while the heathens were too young to have an opinion, my sister commented about her one year old that she didn’t worry because he wasn’t at risk.

We instinctively self-regulated based on risk.  Those at higher risk modified their behavior.  We did this naturally.  As the country tries to re-open, I think most will take this approach intuitively and it will be nearly as effective as a full-blown lockdown, without the nasty side-effects like 40mm jobs lost.  We will do it without the government telling us we have to do it.

Except for Texas.  Texans always do better when the federal government is telling them what to do…

In a webinar with the Peterson Institute last week, Fed Chair Powell said that “Additional fiscal support could be costly, but worth it if it helps avoid long-term economic damage and leaves us with a stronger recovery.”  Rarely does a Fed Chair point the finger at Congress, so it is clear Powell wants the world to know the bailout shouldn’t rest squarely on the shoulders of the Fed.

As for negative interest rates, he said that FOMC members unanimously oppose them as a tool to stimulate the economy.  “The committee’s view on negative rates really has not changed. This is not something that we’re looking at,” he said. “I know that there are fans of the policy, but for now, it’s not something that we’re considering. We think we have a good toolkit, and that’s the one we’ll be using.”

The market took notice.  Ahead of Powell’s speech, the market was increasingly pricing in negative interest rates.  Following his speech, those odds retraced.

But note that Powell did not totally rule them out.

He needs to convince the market that negative rates are the not in the cards, so that when they are in the cards, that type of forward guidance works.  Otherwise, he shoots his shot now and the effect is diluted by all the other accommodative policies already in play.

While Powell is expending energy explaining why negative rates will not come to the US, here are five reasons why interest rates could go negative.

The market will price in negative rates long before the Fed does, which as we have already seen will likely start with T-bills and then begin working its way out the curve.  In late March, t-bills went negative for the first time.

And don’t forget that graph at the beginning that showed implied Fed Funds futures in negative territory.

Dr Cynthia Wu and Dr Fan Dora Xia researched the effective interest rate when accounting for alternative monetary policy tools, such as QE, forward guidance, discount rates, etc.  What they found was that when Fed Funds is above 25bps, it accurately represents the real interest rate. 1

But, when it dips below 25bps (like today), the real interest rate can move materially lower even though the published interest rate remains slightly above 0%.  This real rate, or shadow rate, better represents the true interest rate when all those alterantive measures are accounted for.

Shadow interest rates bottomed out at -3.0% in 2014.  This coincides with the height of QE coupled with ZIRP having been in place for a while.

Unfortunately, they have not updated their study since the Fed cuts rates to 0%.  So I emailed them.  Stay tuned. 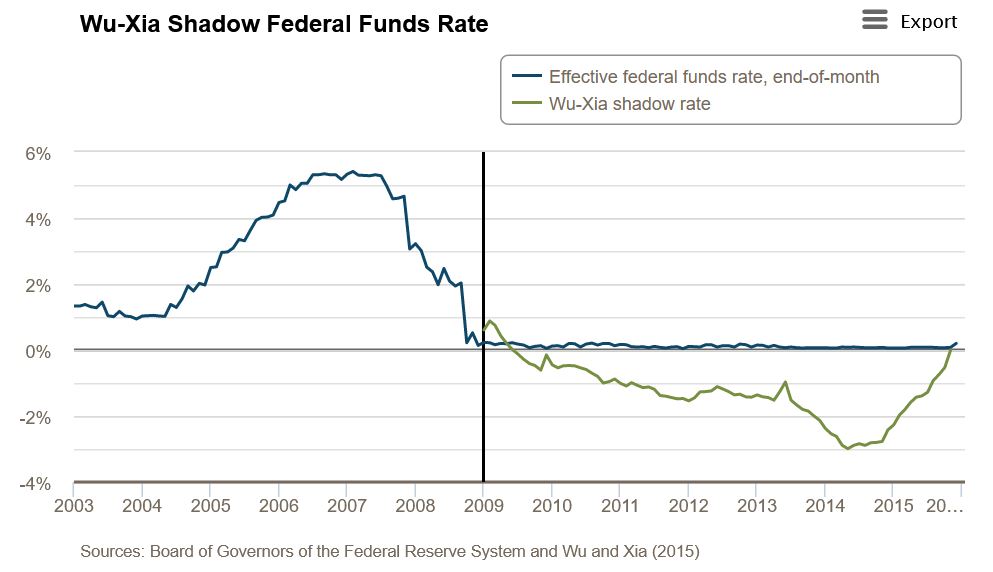 The rest of the world has been grappling with negative interest rates for the last decade, and Japan even longer.  Negative yielding debt is on the rise again.

Notice how the German Bund tested 0%, rebounded for a year, and the broke 0% for about three months.  It was positive for three years before breaking through 0% again and has been in negative territory for more than a year.

We may be the most egotistical country in the world, it would be awfully presumptuous to assume negative yields can only happen over there.

And it’s not just bonds that have gone negative, driven by the whims of a panicked market.  Central banks have taken rates negative, particularly in Europe where central banks like the ECB have been experimenting with negative interest rates for five years.  Switzerland’s benchmark rate has been -0.75% since 2015.

Deutsche Bank released a report that suggests the neutral rate of interest (or r* for all you r0 fans) is already -1.0% today.  The rate the Fed is targeting through monetary policy is already negative.

That means the Fed would need to push rates to -1.0% to simply avoid restricting growth.  As we saw in the Wu-Xia Shadow Rate section, that can be achieved through various policies, not simply the Fed Funds rate moving into negative territory.

But if the target is in negative territory, is it unreasonable to wonder if the Fed will have to chase it there?

Some comments from other policy makers you may have heard of:

Janet Yellen in 2016 while answering questions from Congress, “I would not completely rule out the use of negative interest rates in some future very adverse scenario.”

Alan Greenspan during a September 2019 CNBC interview, “You’re seeing it pretty much throughout the world. It’s only a matter of time before it’s more in the United States.”  He continued, “We’re so used to the idea that we don’t have negative interest rates, but if you get a significant change in the attitude of the population, they look for coupon.”

Now you probably haven’t heard of this guy unless you’ve been reading this newsletter for a few years, but Dr. Vasco Curdia of the San Francisco Fed published an article in January 2019 concluding that the recovery following the financial crisis would have been faster had the FOMC taken rates negative.  I used it as a talking point last year to suggest the Fed was sending signals to the market that it had more ammunition than the market was giving it credit for.  Powell doesn’t need to say he’s taking rates negative as long as the market believes he can take rates negative. And one of the best ways to accomplish that is for a Fed official to put out a paper extolling the benefits of negative interest rates.4

And that the output would have also rebounded more quickly. 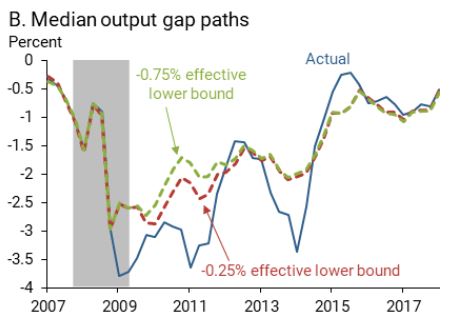 While Powell is suggesting the Fed is not considering negative interest rates, there’s mounting evidence to suggest they may come anyway.

And while I love Powell, let’s not forget that in December 2018 he was still telling us to expect three more hikes in 2019…before he did a 180° just three weeks later.

I don’t think we will experience a negative Fed Funds rate, it can’t be entirely ruled out, either.

“When this crisis is behind us, we will put these emergency tools away,” Powell concluded in his webinar last week.

Good luck with that.

We’ve seen a dramatic spike in interest from borrowers buying caps set at or below their floors to create a synthetic fixed rate.  Click here to redirect to our white paper on this topic.