Yellen’s final “big” meeting this week is unlikely to offer much in the way of clues for 2018 and beyond.  Yellen will not want to send signals about policy that she will not be around to enact.

Blue Dots – the anonymous, individual forecasts of each FOMC member will also likely reveal few changes.  We see a very low probability that the Fed’s projections for rate hikes in 2018 will change from the current forecast of three hikes (putting LIBOR to 2.25% by year end 2018).  Not only has the economy been outpacing projections, but there’s a tax cut bill on the table and potential government shutdown and a changing Fed and…you get the drill…

There is some chance the Fed will change future projections (2019 and 2020), but it may not want to give the market any more reason to flatten the yield curve.  We do expect a shift in projections higher for both GDP and the unemployment rate.

Hawks continue to worry that persistently low unemployment is creating inflation, even if we aren’t seeing it in the data yet.  They don’t want to wait until it is too late to hike.  We could see a scenario where the most hawkish members actually add a hike in 2018 (suggesting four hikes), but this is unlikely to shift the median forecast (which is what is reported as FOMC consensus projection).  In order for the median forecast to shift higher, the more moderate members would also need to add in a hike.

Doves fear the Fed is hiking us into a recession and would hold off on any further rate hikes until inflation is nearing 2.0%, and perhaps would even allow inflation to run hot for a period of time.

Centrists (like Powell is believed to be) wonder why inflation isn’t showing up yet and want to find a balance between the doves and hawks.

With so much disagreement over monetary policy, it just seems unlikely Yellen will box Powell into a corner.

We expect Yellen to speak broadly about the economic progress during her tenure, the need for continued fiscal policy advancement (Congress), and her increasing concern over the lack of inflation.

The Fed has eight meetings a year, with every other meeting including the Summary of Economic Projections (SEP), aka the Blue Dots graphs.  These four meetings are the most likely to come with a rate hike.  Here are market projections in 2018 for those meetings.

The market is essentially counting on two hikes next year, versus the Fed’s own projection of three hikes.

Here are the probabilities for LIBOR at year end 2018:

How did the market do predicting LIBOR in 2017?  Last December, here were those same odds:

The market underestimated the number of hikes this year and floating rate borrowers should consider the possibility of that again in 2018.  With that being said, we actually believe it’s more likely the Fed will hike less than projected.

Inflation tends to change very slowly from month to month.  Over the last 36 months, there have only been two Core PCE reports that changed by more than 0.1%, and those were just 0.2%.  Even if Core PCE starts moving higher, it’s likely six months away from 2.00%. 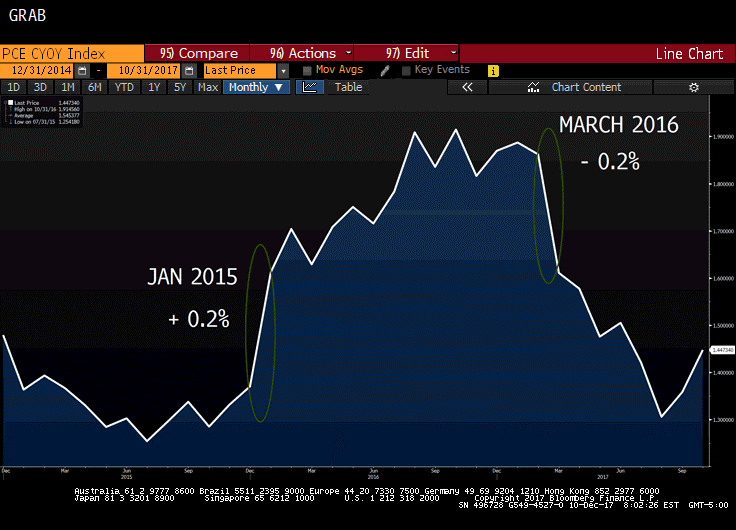 This also suggests the market could be caught offsides if inflation starts increasing more rapidly than usually, but we believe the Fed would still be slow to react to climbing inflation for a few reasons:

Bottom line – there are more risks to LIBOR moving faster than expected than this time last year, but we continue to believe the Fed will hike very gradually.  If the yield curve doesn’t steepen, the Fed will struggle to hike.

Extraordinary measures should allow the government to meet its obligations through Q1 2018 according to the CBO (regardless of the headlines).  The shortfall of cash balances will likely force the Treasury to increase its auction calendar.

The net supply of Treasurys is forecasted to increase by about $433B more than in 2017 to more than $2.2T.  The 10yr Treasury should see about 8% more issuance than this year, while the belly of the curve might see as much as 10% more issuance.

Simultaneously, the Fed is reducing its Treasury holdings.  After the first two months of passive tightening, the Fed’s balance sheet is down to $4.43T, the lowest level since September 2014.

The combined effect in 2018 is likely technical upward pressure on yields.  This is offset by a continued flattening, which is finally starting to show up in economic forecasts.

Key data this week is FOMC’s rate decision Wednesday, which will be preceded by the next CPI inflation report.    ECB meets Thursday.  Clearly no hike and highly likely no change to tapering.  BoE meets Thursday as well and is expected to hold (after it hiked last month), but likely to remind markets that it plans on hiking in 2018.