FOMC Primer - Rates to the Moon

Howie Roseman is the bane of my sports existence. He drives me nuts with a horrible decision, then he does something awesome, then he does something ridiculous like drafting a center for the second straight year even though we have a Pro Bowler starting at center right now. And I get it, we are prepping for the departure of Kelce and you can never have too many offensive lineman blah blah blah. That’s all fine and well when you don’t have other glaring needs. But we have no one in the secondary! We’re apparently allergic to drafting cornerbacks and safeties. If we held tryouts, there’s a 7% chance I would make the team as a cornerback right now. This is when draftniks jump in and lecture me about value…

But as you are walking back to the dairy section, you notice pretzels are on sale – BOGO! You can only buy pretzels or milk, not both. Do you buy the pretzels just because they represent “value”? No. You need milk! Go buy the dang milk!

Powell used his final speaking engagement to lock in expectations of a 50bps hike this week, saying, “there is something to the idea of front loading” and that it is probably “appropriate to be moving a little more quickly.” This paired well with Deutsche Bank’s call for 5% Fed Funds by year end and a deep recession next year as a result.

Markets are pricing in 50/50 odds of a 75bps hike in June. That would be the first 0.75% hike since Pulp Fiction and Shawshank Redemption were battling it out for the top movie of the year (1994). St Louis Fed President James Bullard and San Francisco Fed President Mary Daly both suggested 75bps hikes may be warranted.

I think May and June are largely foregone conclusions. Powell’s responses to the timeline beyond that will be most interesting. What is the definition of front loading? Is it two meetings, or four? This is important because more than two 50bps hikes implies the Fed will push rates above neutral before year end.

The Fed updates its projections every other meeting, and this is the off meeting, so there won’t be any blue dots to share about the path of Fed Funds. This puts even more emphasis on Powell’s Q&A.

Quantitative Tightening (QT) is also set to formally begin, with the Fed shrinking the balance sheet by up to $95B per month or $1.1T per year. This is double the pace of QT in 2017-2019.

QT is about draining excess liquidity from the financial system. The Fed injected $4.5T after the Financial Crisis, and then another $4.5T during covid. While rate hikes get all the headlines, this feels like a huge unknown to me. How will markets behave when the drain opens? How do assets reprice with less liquidity? How do assets reprice with QT and rate hikes happening simultaneously?

I had a boss that believed the economy breaks itself when rates get above 5%. I would like to put a slight twist on that. The economy tends to break itself when:

Prior to 2016, there was a compelling argument that once the Fed tightens more than 3.0%, the economy broke. But in the most recent tightening cycle, the Fed only hiked 2.25% before reversing course. My hypothesis is that QT substituted for some amount of hikes. And yet, there is surprisingly little information on the effect QT has on financial conditions.

We spent an inordinate amount of time on google trying to find something that said along the lines of:

We largely struck out. What little we did find centered on a much lower amount and slower pace than the Fed has outlined this time around. What if the pace amplifies the effect? What if there’s a lag?

One article suggests that about $600B translates into a single 0.25% rate hike.1

Another suggested $169B of quantitative easing translates into about a cut of 0.25%, so maybe the same holds true in reverse?3

If the Fed plans to reduce the balance sheet by $1.1T over the next year, this implies the effect at least 0.50% of hikes, and maybe substantially more.

Combined with 2%+ of actual hikes, and the economy may feel like the Fed has hiked more than 3.0% in a year.

And then it breaks itself.

I’m not confident that the Fed is adequately accounting for the impact of QT on top of hikes.

If true, this suggests the Fed will either struggle to hike as much as they are indicating or they will over hike into a recession faster than we think.

Markets look to the Fed meeting this week the 3rd-4th in which we may see a 50bp rate hike in an attempt for the Fed to rein in inflation.

We also get the next jobs report on Friday. The consensus forecast is for a gain of 390k jobs. The last job report with less than a 400k gain was April 2021. This will be an enormously important number as we move forward.

While most eyes are rightly on inflation, I think the Fed is closely watching the labor market. Powell’s pivot on inflation is closely linked to his views on wage inflation. If we keep adding 500k jobs per month, the Fed is going to keep hiking aggressively. But if job growth grinds to a halt, the Fed may slow the pace.

With rates going to the moon, I’m being given 1000:1 odds that Powell comes out dressed as an astronaut. 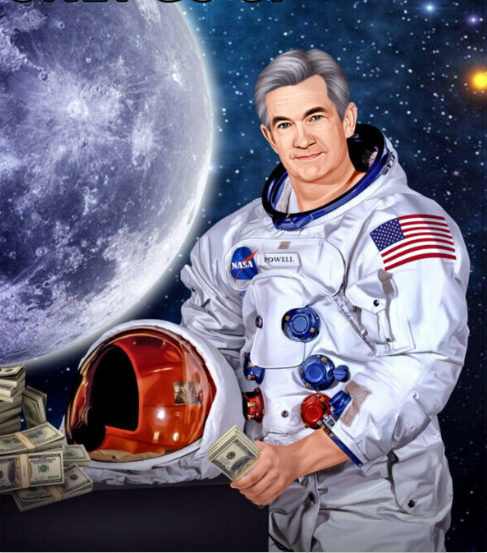