10 Year Treasury – Back of the Envelope Calculation

We usually ignore Jeff Gundlach’s inflammatory rhetoric, but he made two interesting comments (maybe they are only interesting because we happen to agree with them?)

Here’s a graph from his DoubleLine Funds presentation illustrating the correlation. 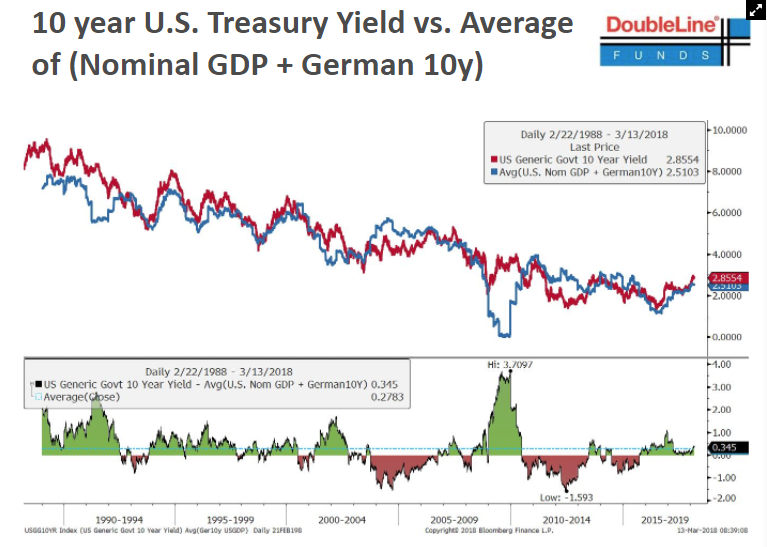 While it probably isn’t precise enough for intraday trading purposes, it can help highlight possible deviations from the mean.  It also reinforces our conviction that the 10T yield is highly correlated to both nominal GDP as well as the German bund.

The 10T seems rangebound for the near term, struggling to break 3.0% with the threat of tariffs hanging over the market and the German bund falling below 0.60%.

Picking a 12 seed over a 5 seed outcomes

There is more and more sentiment that the Fed will change its tune and call for four hikes rather than three in 2018.  We think there is some risk of this, but this week’s meeting for that change is premature.  Here’s a few reasons:

If the Fed does shift to four hikes this year, the most immediate impact will be on interest rate caps through a jump in the 2 Year Treasury.  The Fed would be saying LIBOR will finish the year above 2.50% and the 2T would immediately spike to reflect that.  Cap pricing will be extremely painful if the Fed does this.

If you’ve only been following rates hikes during this tightening cycle, it may seem the Fed only hikes every other meeting.  The Fed has preferred to hike at “big” meetings, where they release the updated SEP and the Fed chair has a Q&A.  But this was also just a reflection of the gradual pace of hikes.  In previous tightening cycles, the Fed typically hiked 0.25% at every meeting (8 per year).  In other words, hiking at every other meeting is the exception, not the norm.

Part of the reason some observers believe the Fed needs to increase expectations at this meeting is to give it time to squeeze in the hikes at every other meeting this year.  But if Powell starts offering Q&A after every meeting rather than ever other meeting, wouldn’t that make every meeting a “live” one?  And if you believe that, the Fed doesn’t need to only hike at the big meeting, he could squeeze a hike in at any off meeting.

We think the Fed would love to get a fourth hike in this year, but there’s enough uncertainty about tariffs and enough time left in the year to be patient at this week’s meeting.

But…if the economy continues to do well, the yield curve steepens, and the market grants permission, the Fed could try to increase expectations for a fourth hike this year.

Whatever minimal data is due this week will be overshadowed by the Fed meeting on Wednesday.  There will be several Fed speakers Friday to help shape market reaction to the meeting.