Father’s Day is that special weekend when you still do everything for the kids, but then add on a few extra “events” to demonstrate how much they love you.  Two years ago, we went to Great Wolf Lodge for Father’s Day.  It’s an indoor amusement park mixture of chlorine and screaming kids, and that fact that it’s indoors makes the screams echo that much better.  Just how I want to spend Father’s Day – not only with my kids, but everyone else’s kids, too.  Last year was a dance recital from 8:30am until 11pm…because, you know, they are out of school and can stay up late and work takes the summer off, too.  Guess who was in charge of scheduling that?  Not the dads.

So to celebrate, we spend even more time with these kids on Father’s Day?  Pack up the family for that once a year picnic where suddenly sitting in the grass together eating sandwiches is how we spend our time?  We’re like a family version eHarmony profile in motion on Father’s Day.  Hiking.  Holding hands.  Fishing.  Smiling.  Grilling.  Look at us – we’re active, healthy, and happy.  You’d pick us, right?

You know what I want for Father’s Day?  A cone of silence, my recliner, and unlimited pizza.  I don’t want to hear “dad” the entire day, particularly if it’s followed by a request and/or admission of guilt about something that they just broke.  Give me a chair, the US Open, and a strict “Do Not Approach” sign with two Secret Service agents guarding my space while I’m wrapped up in a warm, cozy, blanket of silence.  And I mean total silence. I want to bask in the silence.  That’s what I want.

But since Father’s Day isn’t about me, we don’t do that.  So I needed to come up with an alternative plan of action to avoid a full day of finger painting, pottery making, basket weaving, and all the other once a year events that always seem to conveniently fall on Father’s Day.  I’m getting wiser in my old age, so you know what I asked for this year?  Back to back movies.  Solo followed by Incredibles 2.  That’s a solid five hours in dark and silence with some peanut M&M’s.  I’ll probably even nap during Solo.

Father’s Day isn’t about spending time with the kids – we already do that every single day.  Father’s Day is about damage control and retaining my sanity. But that’s probably just me.  You probably love all those extra activities on Father’s Day and that’s why you’re a better dad than me.  That’s why your kids are luckier than mine.  Happy Father’s day and enjoy that picnic.

The FOMC hiked as expected last week and delivered a slightly more hawkish than expected tone.  The Committee upgraded its assessment of economic activity and revised most of its forecasts higher.  In the subsequent press conference, Powell was very upbeat about the economy.

We still fall in the camp of two more hikes this year and the Fed will only hike three more times in a true Goldilocks scenario.  But whether the Fed hikes in December or March 2019, does it really matter as long as they get there?

The Fed also used the word “symmetric” again to describe its approach to inflation, meaning it will tolerate an overshoot to help compensate for the five years of below-target inflation.  This implies a slightly dovish position because the Fed won’t overreact to a sudden inflation report with a 2 handle.

Couple of other takeaways:

The FOMC also removed the language that Fed Funds would remain accommodative for some time – this means the Fed believes rates are moving towards neutral.  The Fed has hiked 1.75% already and has about 1.00%-1.25% more to go, which means we are more than halfway through the tightening cycle (58% for you math geeks).

The neutral rate is the rate at which neither promotes or restricts economic expansion.  Think of it as an equilibrium rate.

The Fed has been strongly suggesting the new neutral rate is somewhere around 2.50% – 3.00%.  Again, this is important for floating rate borrowers worried about their rate running away from them.

But the Fed is also projecting Fed Funds north of 3%, meaning it believes it will push rates beyond neutral and into restrictive at some point.  The challenge ahead for Powell & Co is to hike enough to prevent the economy from overheating, but not so much the Fed tips us into a recession like it has done so many other times.

Below is a graph made by two Fed economists that tries to illustrate the relationship between the neutral rate and the real rate (rates accounting for inflation).  In a perfect world, these lines would track directly on top of each other.

When the blue line (real rates) is below the grey line (neutral), then monetary policy is accommodative.  That’s the environment we’ve been in since the 2008 crisis and captures not only Fed Funds, but QE policies as well.

Now that these lines are converging, it means monetary policy is neither accommodative or restrictive.  If the blue line continues its trend higher, policy will shift to restrictive. 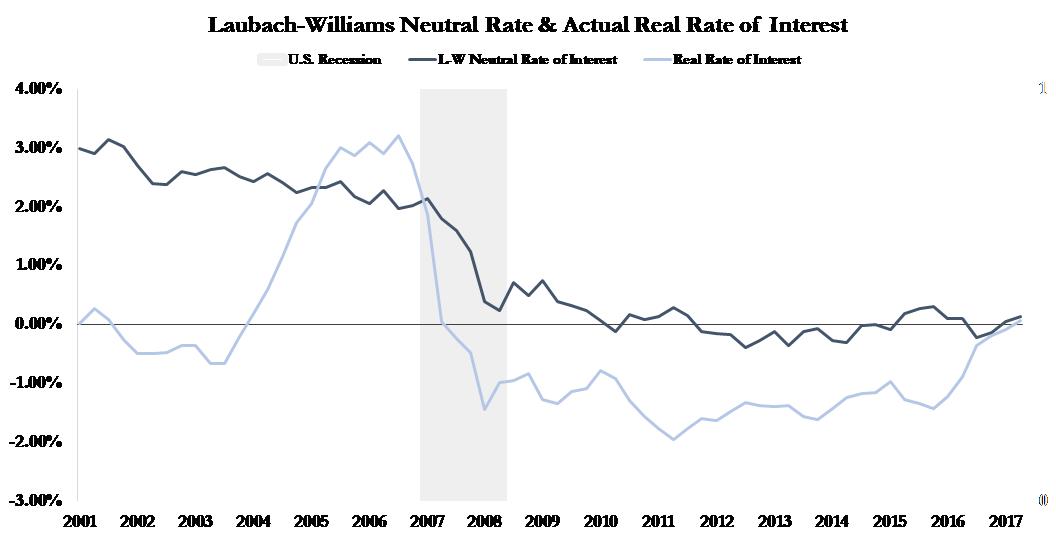 I really crushed it a few weeks ago when the newsletter said 3.06% was the new floor on the 10 year Treasury…promptly followed by Italy experiencing a debt crisis and the 10T plunging to the low 2.70%’s.

But I also think it speaks volumes that the market has moved past that so quickly and confidently.  How did we go from a debt crisis and possible end of an entire currency to the all-clear signal in two weeks?

While the issues in the eurozone will help keep the German bund low, which in turn will create a drag on the 10T, the US economy continues to diverge from the global economy.

Perhaps the bund will serve as a dampener during the slow summer months while issuance dips, but there are too many fundamental and technical factors applying upward pressure on yields for us to believe the 10T won’t break 3.00% again before year end.

Takeaway – the recent dip is driven by temporary fears, while the upside pressures are more permanent.  The dip may stick around longer than usual given how yields tend to move over the summer, but we wouldn’t get too comfy with sub-3.00% 10yr yields.

The single greatest reason for yields to remain low in the near term is an escalation of trade war fears.  If the numbers stay relatively low ($50B is not a big deal in the grand scheme of thing) and the policies are more about sending a message and less about inflicting actual damage, those fears should gradually subside (just like Italy fears).  If not, however, tariffs and trade wars absolutely have the influence to drive rates lower.

Pretty quiet week on the data front, but lots of Fed speakers set to massage the message from last week’s meeting.  But the real headlines will likely come from the WH policies and rhetoric.

My ten year old on Thursday, completely out of the blue, asked me where I kept my pencils at work.  Such an odd question.  I told him I kept them in a cup.  “In a cup?!  That’s it?!?”  He was incredulous, as if the business can’t possibly succeed if pencils are only kept in a cup.  Apparently, he’s unaware of the paperless movement.  Kids are weird.

On Father’s Day, I got several heartfelt cards that were very moving, particularly from the two oldest girls.  I also got a handmade painted sign that says, “you are loved”, an awesome Rick & Morty coffee mug, and shorts and a shirt (to upgrade my admittedly bland style).  We also had a fun dinner without minimal (but not none) screaming and fighting.

Also, my ten year old gave me a small, hand painted ceramic jar with the names of all the kids painted on the sides.  Inside was a handwritten note scribbled in pencil on a small, torn off piece of notebook paper.

“You’re the best father I could have.  I hope you will use this to hold your pencils instead of a cup.”

Aren’t kids the best?  I love those little….

For all the dads out there, I hope yesterday was everything you deserved.