So, everything’s cool in the WH then, right?

Job Report
After spending the weekend in frigid NYC, I can understand why the December payrolls disappointed.  I wouldn’t have ventured out to look for a job in those temps, either.  This also means there could be a rebound effect next month.

In this sort of stable genius job environment, the Fed is more focused on average hourly earnings.  The y/y growth came in at 2.5%, exactly as forecasted and unchanged from last month.  November was revised lower from 2.5% to 2.4%.

Bottom line – this report is largely a non-event.  Nothing here should change Fed-speak about three hikes in 2018, which should put LIBOR around 2.25% at year end.  Check back next month to see if an outlier number changes those perceptions.

FOMC Minutes
The minutes from the December meeting showed a more upbeat and hawkish Fed than expected, but it should be taken with a grain of salt because of Yellen’s upcoming departure.

Yield Curve Steepness
We continue to believe the flatness of the yield curve could handcuff the Fed from hiking three times this year, particularly in the second half of the year.  Wednesday’s minutes, however, cast doubt on this fear.

Minutes: “They generally agreed that the current degree of flatness of the yield curve was not unusual by historical standards.”  Here’s a 30 year graph of that steepness with a horizontal white line at today’s level…does it look like a level at historical norms? 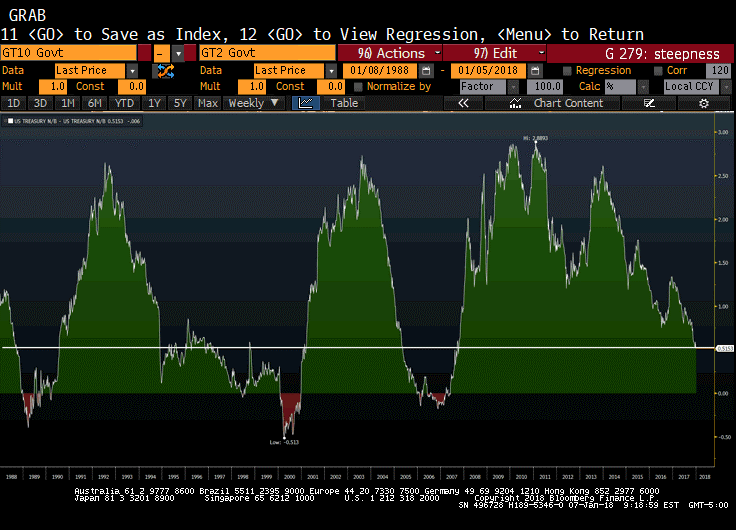 If this is truly the Fed’s position, we are worried.   It suggests a Fed that is willing to continue hiking us into a recession.  The real worry may not materialize in the near term – we are still two hikes away from a perfectly flat yield curve.  We are more worried about hikes today while the 10 year Treasury is cooperating.  But what if the Fed keeps talking up hikes, the 2T runs up to 2.50%, and then the 10T starts dropping?

Then again, the minutes did note, “several participants thought that it would be important to continue to monitor the slope of the yield curve.”  Our hope is that Powell is paying more attention to the yield curve than Yellen.

Inflation
On the inflation front, two dissenters in December (Kashkari and Evans) noted that they would like to see more progress towards 2.0% before hiking again.  But most members “judged that much of the softness in core inflation this year reflected transitory factors and that inflation would begin to rise as the influence of these factors waned.”

The Fed has been singing this tune for nearly a year now.  At some point they will have to abandon this refrain if inflation doesn’t start ticking up.  To be clear, no one wants some signs of inflation more than the Fed.  Making monetary decisions is challenging enough, imagine how much tougher that becomes when your models don’t work (cough cough Phillips Curve).

The Fed has absolutely no incentive to admit defeat on inflation yet, so the absence of news doesn’t worry us.  If inflation does tick up, the Fed will breathe a sigh of relief and the likelihood of three hikes in 2018 increases.  If inflation is still lagging in Q2 2018, the Fed can start to suggest fewer rates hikes and the market will rejoice.  Long live accommodation!

New Framework
Let’s assume inflation continues to lag, leaving the Fed in a pickle.  How to enact monetary policy in a new environment?

The Fed’s dual mandate is 1. Unemployment, 2. Inflation.  One of those is playing nice.

There was a very subtle hint in the middle of the minutes that suggests the Fed may be considering a different framework for monetary policy.  In the last meeting, the minutes noted “a couple” of participants were interested in developing an alternative framework.  That language in December was changed to “a few”.  I know, I know, this is like watching paint dry, but bear with me.

The language around the framework also hinted at a shift, from “suggested that further study could be useful” to “could be helpful.”

So, more participants are interested in an alternative and that alternative might be “helpful”.  Keep in mind that Fed-speak changes are carefully managed and the Fed is comfortable keeping language identical from meeting to meeting.  In other words, if the language changes it’s because the rational behind the language changed.

What would an alternative framework look like?  The most likely scenario involves price targeting, or maybe even GDP-targeting.  Note that both of those address the recent struggles of the economy – inflation and growth.

Price level targeting has been kicked around for a few years.  It’s pretty similar to inflation targeting except that it targets prices (inflation) over a given period of time rather than a snapshot.  With inflation having run so low for so long means that a price-targeting regime would allow inflation to run hot for some time to help offset that low period.

A shift in monetary policy decision making like this would likely translate into fewer rate hikes, a weaker dollar, and a steeper yield curve…basically everything the Fed is trying to accomplish.

And with a new Chairman set to take the reins, the odds of this happening are likely higher than in 2017 while Yellen’s future was uncertain.

Headliner this week will be the inflationary data and, to a lesser extent, retail sales.  The 10yr Treasury is poised to make a run at the key resistance level of 2.62%.  The German Bund is gradually moving higher, giving the 10T room to move up with it.

The first mention of a stimulus package could the catalyst for 2.62% breaking for the first time in nearly four years.

Leadpipe Lock of the Week – sorry Dawg fans, Bama is winning tonight.  It pains me to say that, but Bama was the best team most of the year.  They lost to an insanely hot Auburn team and then suddenly were on the cusp of missing the playoffs.  Combine a national championship loss last year with the disrespect of the playoffs this year and Bama has more motivation than it needs to win tonight.

Leadpipe Lock of the Next Four Years – John Gruden will be a minor bust with the Oakland/Vegas Raiders.  He has a career 95-81 record and a SB title with Dungy’s defense to thank.  He has benefitted from a decade in the booth without any actual results to worry about.  In fact, even in the booth his primary attribute is enthusiasm.

If you like slightly better than .500 ball, you’ll love Gruden as your coach.  This hire is about selling tickets in 2020 when the team moves to Vegas.  And after multiple 9-7 seasons he will be ushered into the sunset with 6 years and $60mm left to go…