After a stunning upset in the GA special elections, the Democrats now have the slimmest of margins in the Senate.

Rates spiked.  We warned about this being a risk for higher rates in the November election, but I probably underestimated the likelihood of it happening in the special elections.  Georgia is blue?

Democratic control, assuming they can vote in unison, pulls forward recovery because of the added stimulus we will see shortly.

Biden will need to pick his battles carefully.  Republicans can still filibuster.  Democrats can rely on reconciliation, which basically allows one fiscal-related bill per year to bypass filibuster.  But what’s the priority if you can only do this once a year?

I don’t think Democrats tackle taxes this year.  They will be too focused on stimulus to simultaneously pursue tax reform.  Plus, why raise taxes on corporations when you are dealing with a weak labor market?  Does Biden really want to upset risk sentiment in the middle of a pandemic by threatening tax changes?

But 2022?  Yeah, taxes will be on the agenda, particularly if Democrats increase their majority.  We’ll see if moderate Democrats want to attach their name to tax hikes.  Let’s not forget how hard it was for Republicans to address tax reform in 2017 with a bigger majority.  Obviously, if I’m wrong, Democrats will go after wealth redistribution economic inequality low hanging fruit.

More likely, those two Senate seats translate into an additional $1T in spending this year and more next year.  That’s why rates are up.  Stronger economic growth and greater likelihood of inflation.   Most economic forecasts I’m reading suggest higher GDP by 0.5% and 1.0% this year and next, respectively.

Here’s what I think Democrats focus on this year in lieu of taxes. 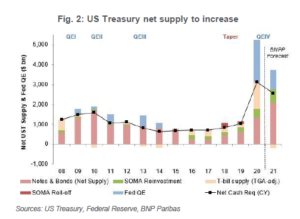 The odds of the 10 Year Treasury hitting 1.50% this year have jumped.  What if some Fed official mentions the possibility for tapering, a la Bernanke 2013?  What if the Fed ties an unemployment rate to tapering and unemployment rate drops faster than expected?  The market will price in tapering.

I don’t think rates are on a runaway train, but there is newfound upward pressure on yields.  Keep in mind, however, that the Fed will intervene if they do spike to uncomfortable levels.