-Fed meeting was uneventful, but did suggest two more hikes this year

-China announced $60B in retaliatory tariffs

One of the key technical factors we have repeatedly cited as a catalyst for higher yields is the massive Treasury issuance needed to pay for the widening deficit. On Wednesday, the Treasury caught the market a bit offsides by unexpectedly announcing a sharp increase to scheduled issuance as well as launching a new two month bill to help provide short term market liquidity.

The revised auction sizes will add $30B to debt issuance this quarter. The Treasury also indicated it will auction $769B in 2H 2018, a 63% increase over last year.

The market’s real concern here is that this increase raises the specter of additional increases in the future. As the budget deficit widens in the coming years, will a $30B quarterly increase become $50B? $75B? As the graph below from Bloomberg illustrates, the CBO projects a trillion dollar deficit in 2020. 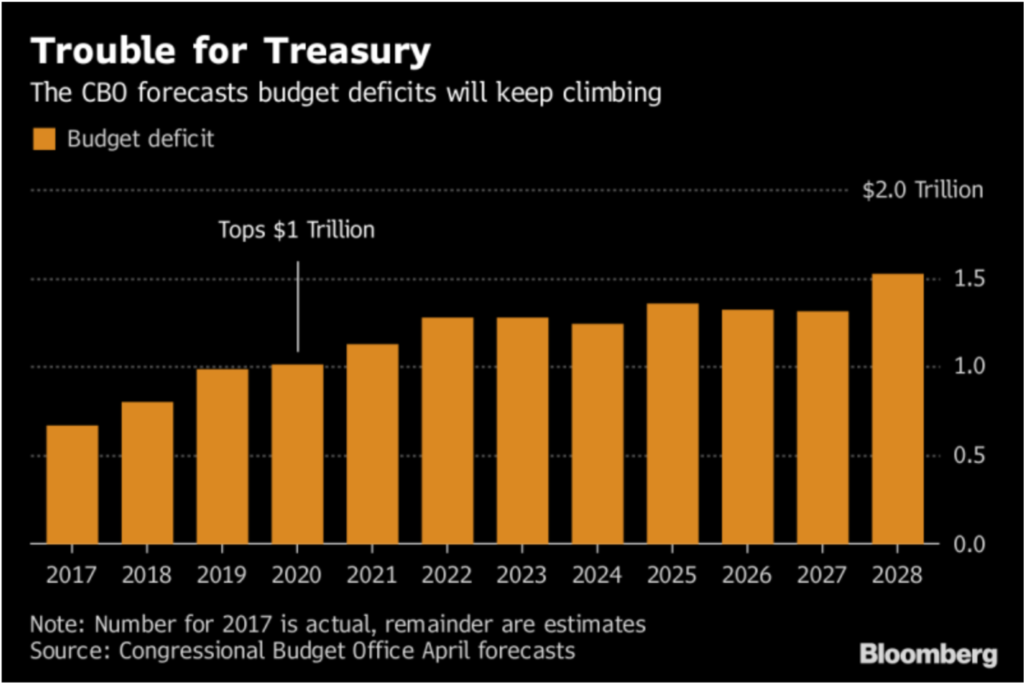 But isn’t that the real problem? Running a sharp deficit has traditionally been a tool to dig ourselves out of a recession. With the economy doing well right now, are we spending ammo we might need in the future?

Corporate tax and withholding receipts are $17B less than the same time last year thanks to the tax cuts. The administration claims that economic growth will cover this deficit, but early results don’t suggest that. Furthermore, if that really is the plan, isn’t this a bad time to be pursuing tariffs with China and the Eurozone?

The government has spent $500B more this year on debt service as the result of higher rates. If US corporate debt exceeds $9T, how long before equities start wondering how higher interest rates could impact EPS?

If you’ve been reading this newsletter over the last few months, one of the themes we have stressed is the growing consensus that the economy is peaking right now. Every economist we trust is projecting a decline in GDP over the next two years as impacts from the tax cuts and spending bill fade.

If growth slows rather than accelerates, won’t that exacerbate the effects of a widening deficit and the subsequent Treasury supply needed to fund that gap?

Rates immediately plunged. And by immediately I mean like 6 seconds after we sent out the newsletter. The T10 was below 3.00% before mailchimp could even complete delivery. I got more than one “nice call” email that week. Teammates have given me grief at every turn since then, like “oh yeah, is that the new floor?” Even my kids have gotten in on the action. I was lecturing my 10 year old about doing backflips on the couch. “Oh yeah, I could get hurt…just like 3.05% is the new floor, right Dad?”

It has been rough.

But…I still think the stage is set for higher yields in the second half of this year. Because I am a believer that we are in a new, low, long term rate regime, it is not easy for me to conclude that. But here are a few reasons why I think long term rates are poised for a move higher.

The risks to this assessment are largely external factors rather than underlying fundamentals. Trade wars. Geopolitical (cough cough Italy). Currency crisis. I try to think of those events in the same way I think of politicians and their impact on the economy – please just stay out of our way and let us handle our business.

If those type of events fail to materialize (or escalate), the stage is set for higher yields. I still don’t think 4.0% is on the table, but 3.25% doesn’t feel unreasonable. So instead of saying 3.05% is the new floor, I’ll just say the stage is being set for higher rates through year end.

Plus, that’s harder for my 10 year old to complain, “Break my neck? Oh yeah, just like the stage is set for higher yields in the second half of 2018, right Dad?”

The FOMC meeting was a non-event, with the most notable change to the language being an upgrade of economic activity from “solid” to “strong”. Other than that, there were almost no changes to the statement from the last meeting.

Since the economic outlook had been upgraded at the June meeting, we were not surprised to see little in the way of changes this time around. The Fed seems intent on hiking two more times this year, and if the second hike can’t come in December then it will come in Q1 2019.

As we argued last week, that would put Fed Funds in the realm of the new neutral rate (2.50%-ish) and we believe each additional hike beyond that will require a higher threshold before moving.

Coupled with our belief that we may be at the peak right now, and Powell may have an increasingly tougher time to hike in 2019 as GDP softens.

The economy added 157k jobs last month, a mildly disappointing print and below the three month average of 224k. Factoring in losses associated with summer schedules and Geoffrey the Giraffe’s bankruptcy (31k jobs lost), and the number would have come in closer to expectations. Additionally, the previous two months were revised higher by a combined 59k. No early word on if Urban Meyer will included in the release next month.

In other words, another reasonably strong report. But just like with GDP, we can’t help but wonder if we are peaking…

Inflation is really the only important data, and Fed speakers should help reinforce the message delivered last week. As always, anything out of the WH twitter feed will trump eco data.