How to Save 33% on Your Term Premium

Three year interest rate caps have gotten pricier again.  The reopening of the US, vaccine deployments, blowout jobs reports and inflation data prints, and bottomless stimulus and Fed accommodation have driven traders to pile on bets for a faster-than-expected economic recovery.  As rate expectations have risen, so has cap pricing for mid to long term maturities.  Most of the increase in premium, however, is driven by the last year of the cap’s term.

Further contributing to heightened cap costs, markets have been in disagreement with the FOMC’s projections for the path of rates.  Their current policies state they will now target an average inflation rate of 2.00% before hiking again but have given no indication of what period that average will be taken; additionally, they have stated and restated that they view today’s inflationary pressures as “transitory.”  They have also offered repeated assurance that they will give markets a heads up well ahead of time before they start dialing back quantitative easing programs.  They’ve begun narrowing this gap at their last meeting.

The discrepancy between markets and the Fed has driven an increase in uncertainty (volatility).  Volatility is one of the primary components that drive interest rate cap costs.  Even if today’s forward curve projects LIBOR to remain well below 2.00% for the next three years, greater market uncertainty means a greater chance that the actual path of rates could wind up climbing much higher.  The graph below illustrates today’s projected path for LIBOR compared to a shift just one or two standard deviations higher.

A bank selling a cap is going to price in the chance they’ll need to pay out in a higher rate environment, even if that scenario is still less likely to play out.  This volatility premium is exacerbated with term since traders become increasingly uncertain about the path of rates the further out they look. 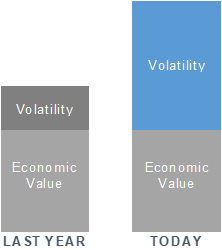 As you increase a caps maturity, term premium becomes a larger component of cap costs than the projected economic value.  As the forward curve steepens and market volatility rises, the sooner that point becomes.  The following chart breaks down how much the third year of a cap contributes to a cap’s premium, comparing today’s costs to a year ago.

Borrowers can mitigate overpaying for term premium by purchasing a shorter term cap up front, letting some of that term premium bleed off, then extend the cap to the full term. 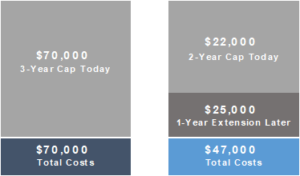 However, those savings are only realized if rates follow the market’s current projections.  If one year cap costs rise enough before you extend, those savings could get wiped out.  Markets usually overestimate the future path of rates as we exit a recession but it’s anybody’s guess whether today’s prediction is the right one.

You also don’t have to wait until the end of the second year before purchasing the one year extension; a cap can be extended at any point, even if it’s the day after it was bought.  So, if rate expectations begin to rise well before you planned on extending, you can go ahead and push the maturity out to take that risk off the table.

In fact, waiting just six months before extending the cap can cut the cost by over 10% since you’ve let the most expensive portion of the hedge, the tail end, drop off.

Third year cap costs are mostly term premium.  If your lender’s requiring a three year cap or longer, it may be worth negotiating for a shorter hedge requirement upfront, then escrowing for an extension later.

Pensford can quantify what your third year cap cost is and identify your breakeven point if you decide to purchase a shorter term then extend.  Reach us at capteam@pensford.com or (704) 887-9880 for help identifying the best strategy for your next interest rate cap.