There is no perfect way to withdraw from a 20 year war, but Biden botched this so badly that I think this will be his lasting legacy regardless of anything else he does.

This is not a political statement.  Let’s not forget Trump criticizing McCain or claiming to know more about ISIS than the generals that had been fighting them.

We can’t force our democracy on countries that don’t want it.  Why is this such a tough lesson to learn? The US military should be deployed without hesitation when a military strike is warranted, but not for nation building.  If a country collapses within weeks of a withdrawal, did they really want you there in the first place?

It’s always the troops on the ground that pay the price.  The thirteen soldiers that died last week would probably be the first to say they were willing to risk their lives for us, but we need to demand better from our leaders when their decisions cost lives.  I am grateful for the men and women that answer the higher calling so I can sit comfortably at home and cast judgement on politicians.

Sure sounds like the Fed will begin tapering by the end of the year.  Just like in 2013, the market revolted.  Taper Tantrum 2.0 is underway, human sacrifice, dogs and cats living together, mass hysteria!

There are two main takeaways from the market’s non-reaction reaction:

Before we can take guess at what impact tapering will have on the economy, we need to revisit the effect it had last time around.

Following the financial crisis, it took six years and multiple rounds of QE (remember QE, then QE 2.0, then QE 3.0, then Operation Twist…?) for the Fed’s balance sheet to balloon from $0 to $4.5T.

Beginning in January 2014, the Fed began slowing the pace of purchases from $85B/mo down to $0 by October 2014.  When the Fed began tapering, the balance sheet stood at $4.0T.  It still added $500B in purchases that year, but it just slowly stopped adding new purchases until it leveled off in October.

In 2018, the Fed began taking active steps to reduce the balance sheet, cleverly called Reverse QE.  Or Balance Sheet Reduction.  Or Quantitative Tightening.  Or whatever.  The balance sheet declined from $4.5T to $3.8T.

No matter what you call it, the Fed pretty quickly had to stop shrinking the balance sheet because the market seized up.  Remember the repo market freak out in October 2019?  The Fed intervened to calm markets and began growing the balance sheet again.  It grew back to about $4.2T.

When Covid hit, the Fed took the lessons from the financial crisis and decided, “We can either drag this out for 6 years and multiple rounds of QE, or we can go all in at a much faster pace.  Either way, we end up at the same place in terms of balance sheet size and ultimate recovery, the only variable is the timeline.”   I agreed 100% with this conclusion.

Think back to Tapering 1.0, when the Fed began slowing after the balance sheet had grown $4.0T.  Eerily similar.  Whenever the next major crisis hits, we can probably pencil the Fed in for a $4T balance sheet expansion, huh?

The balance sheet will continue to grow after the Fed initiated tapering, albeit at a slower pace.  In 2014, the balance sheet still grew $500B.  A similar trajectory this time around would result in a Fed balance sheet of $8.8T, a total increase of $4.6T.

There are two distinct market reactions, and it is very important to distinguish between the two.

This is what you remember from May 2013 following Bernanke’s comments that the Fed could slow its pace of purchases beginning in September 2013.  He suggested the Fed might move from $85B/mo to $65B/mo as the first in a series of gradual reductions towards $0/mo.

This is the subtle response we won’t even realize is happening.  There is some technical impact from the biggest buyer of Treasurys slowing the pace and amount at which it buys Treasurys.

This one is much tougher to see/measure.

The Fed will not hike until tapering is done.  That’s the primary reason the market has been trying to decipher if tightening will begin in Q4 of this year or Q1 of next year.  The start date begets the end date begets rate hikes.

But…rate hikes are unlikely to start as soon as tapering concludes.  Following the 2014 tapering, the Fed waited more than a year for the first hike, and that was a false start.  It didn’t hike again for another full year.

In effect, the start of the rate hiking cycle was more than two years after the conclusion of tapering.

A similar pattern this time around would put the first hike at the end of 2024.

Even following the pattern with the misfire hike puts the first hike at the end of 2023.

If Powell is wrong about inflation being transitory, and tapering doesn’t slow inflation, and the Fed feels like it has to hike to cool off the economy, the Fed could hike before the end of 2023.

But that’s not going to happen.  Remember, there’s a difference between taking your foot off the gas pedal (tapering) and slamming on the brakes (rate hikes).  The Fed is going to be very careful about applying the brakes.

When I first started in this business, the Fed hiked 25bps every meeting.  Then following the financial crisis, it was 25bps every other meeting.  Whenever the Fed applies the brakes, I wouldn’t be surprised to see that trend continue and it only hikes once or twice a year.

Technical Reaction – none for at least three years from today

While the Fed was actually tapering in 2014, the 10T grinded lower.  The knee jerk reaction higher was overdone, so yields spent that year falling, searching for an equilibrium.

Given the size of the knee jerk reaction in 2013, it is very challenging to deduce the technical impact that tapering had during the subsequent year.  I think this will be the biggest difference this time around.  If there is no knee jerk response because the Fed has done such a good job of signaling, then we will be left with only the technical response.

All else being equal, that means the 10T should probably grind higher towards 1.75%-ish.

This is incredibly simplistic analysis, which will be upended by any variety of events.  For example, if economic data slows and the Fed doesn’t acknowledge that, rates could actually fall because the market fears the Fed will tighten us into a recession.  Alternatively, the rate expectation baton may be passed from tapering to hiking at some point like it did it in 2016 and rates climb.

But keep in mind that just because the biggest buyer of Treasurys is changing its appetite doesn’t mean there’s no appetite.  There is plenty of demand for Treasurys ready to step in and fill the vacuum.  Maybe they aren’t a buyer at any price the way the Fed is, but the drop in demand is not a huge one.

Knee Jerk Reaction – none, because messaging was handled so well

Using the German bund as a proxy for global, highly rated sovereign debt, you can see that rates fell during tapering, mimicking US yield movements.

More importantly, the spread between UST’s and the bund widened as the US disconnected from the rest of the world.  If we think of US yields and global yields as being tethered, tapering suggests the leash needs to be let out as the US recovers more quickly. 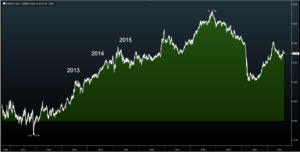 The balance sheet growth over the last 18 months has been effectively the same as it was post-financial crisis.  That expansion did not lead to sustained inflation above 2.0%, why would it this time around?

Yes, we’ve seen a spike.  But that feels like a natural reaction when you compress 6 years of accommodation into 18 months and couple it with a supply chain disruption and a dislocated re-opening.

Notice how inflation began falling once the Fed initiated tapering in 2014 and continued into 2015.  I haven’t caught up with Jay Money in a hot minute, but I bet he is counting on an inflationary dampening effect from tapering.

Long time readers will know this is my favorite measure of overall accommodation.  How hard/easy is it to do business?

As expected, tapering created a gradual tightening of conditions in 2014.  Powell would probably love a similar reaction in 2022.  Cool things off without bringing them to a total stop.  And since we are starting at historically accommodative level, a general cooling off is probably a good thing.

Turning off the printing presses, no matter how slowly, is likely to dampen growth and job gains.  But the impact is challenging to measure because QE is done in conjunction with other massive stimulus programs and it is very difficult to account for the “pulled forward” effect.

Do GDP and job gains slow as the result of tapering?  Or were they going to slow anyway because stimulus/accommodation has pulled those gains forward?  I don’t know.  But at first glance, tapering doesn’t appear to have much impact on either.

I included this graph in last week’s newsletter, highlighting the correlation between stocks and the Fed’s balance sheet.  With the printing presses on, stocks can only go up! 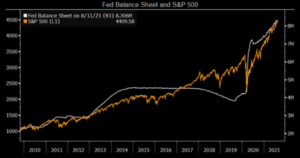 So what happens when the printing presses get turned off?  The impact is not as dramatic as I would have expected.  In fact, I can’t even tell the Fed was easing off the gas pedal in 2014.

But I can tell the impact actual hikes began having in 2016, marginal as it was.

Technical Reaction – markets get over it and stocks continue to the moon!

Friday’s job report will be the main data point, with the potential for a lot of variance given enhanced unemployment, back to school, and delta.  Lots of Fed speeches to help massage the messaging from Jackson Hole.

Prayers for the last line of soldiers in Afghanistan.  I hope we don’t get that dreaded final attack that seems to be unavoidable.

Learn more about defeasance and how it can help your interest rate strategy.