I’m writing this before the Penn State vs Michigan game, as well as the Eagles vs Cowboys game. Rarely do my teams get to take on the most hated teams in sports in a single weekend and I know my own weaknesses. One more questionable Clifford decision, one more blown 3rd and long defensive stop, one more long run allowed right up the middle and I will just snap. No one wants to read a rage-filled newsletter. You’re welcome.

Go Ahead and Pencil in that 2023 Recession

Recession probabilities are at levels that have always resulted in recessions.

England gilts might be new Bear Stearns moment, but liquidity issues are popping up everywhere.

As noted in the intro, Yellen is worried about Treasury liquidity. That’s not nothing for a Treasury Secretary to say publicly.

The Bloomberg Liquidity Index is at levels not seen since March 2020. QT might be ending sooner than expected.

Powell won’t ease off the brakes just because unemployment climbs 1% or stocks fall another 20%, but inflation will move to the backburner if financial instability becomes the primary concern.

There’s so much being written about last week’s persistently stronger inflation reading that I’m not even going to bother.

The bottom line is that Powell is stuck with another 75bps hike on November 2nd barring escalation of England shocks. Inflation expectations jumped and the monthly data revealed persistent pressure. Powell can’t be seen as letting off yet, even if he would love for everyone to acknowledge a lag between rate hikes and inflation readings.

But since CPI is backward looking, it seems the stage has been set for a misstep. Other measures suggest pricing will be cooling dramatically in the months ahead.

The WCI Composite Index of major shipping routes shows container pricing has fallen off a cliff.

Same for the Shanghai Shipping Index.

And the Fed’s own Supply Chain Pressure Index has eased back to 2020 levels.

Retailers are sitting on a record $732B of inventory. “There is an increasing smell of desperation in the air because retailers are saddled with a ton of excess,” said Elaine Kwon, managing partner at Kwontified, a retail consulting firm, and a former manager at Amazon Fashion.

“We’ve seen in the last few reports that inventory has been a key swing factor — in the second quarter, it was a massive drag on GDP growth, and that’s likely to continue,” said Daco, who expects a recession within the next six months. “If anything, this inventory offloading — the destocking cycle that retailers are going into — will exacerbate the downturn.”

Meanwhile, Redfin reported fourth consecutive monthly decline in rents, with rents climbing at half the pace at the first hike in March.

As other factors are cooling off, shelter is comprising a greater and greater percentage of the overall inflation picture. Thank goodness we use real-time data to measure this increasingly important component….oh wait. From the BLS itself.

In other words, we are still measuring rents at the start of the tightening cycle and not the most current monthly data.

Powell has said wage inflation is his main focus within the broader inflation bucket. Pre-covid, average hourly wages increased about 3.5% per annum. YTD 2022 is averaging 6.4%, but falling.   If the pace of declines since the first hike continues, wage growth will be back in the mid-3.0%’s in a year. 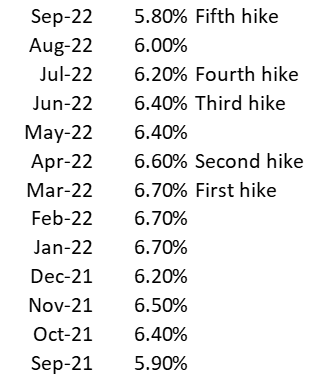 If you’re willing to look ahead, the inflation story isn’t quite as scary as last week’s data would suggest.

Powell is stuck between a rock and a hard place.

I thought Larry Summers was ridiculous when in March he said rates would have to go to 5%-6%. I thought Bloomberg was nuts when it called for 5% Fed Funds two months ago.

The Fed’s Beige book will be released on Wednesday which gives insight into economic conditions ahead of next month’s FOMC meeting – this is compiled from data across the 12 regional banks.

Going into the end of the week we’ll have a handful of Fed speakers tied in with leading economic indicators and inflation expectations to round the week off.