After a weekend of powerful emotions and memories, I won’t try to speak eloquently on 9/11.  But I will say this…of all the images I saw over the weekend, one I had forgotten about was President Bush throwing out the first pitch at the World Series in Yankee Stadium.  He strode out, waved to the fans, and threw a perfect strike.  I mean… a perfect strike.  It’s funny how those seemingly small, symbolic acts can carry so much weight.  It was exactly what we needed at that moment and was the most presidential thing he could have done that day.

PPI, considered a leading indicator of inflation because it captures pricing pressure from producers (rather than consumers), came in at 6.7%.

Whether producers can pass higher costs on to consumers remains to be seen.  Thus far, wind-aided by stimulus, enhanced benefits, and a year of pent-up demand, the answer appears to be yes.

But that surge in pricing is largely attributable to supply chain disruptions.  Removing Fed accommodation won’t resolve that.  If we could wave a magic wand and instantly make Ohio State’s run defense better solve these dislocations, would we still describe the economy as so overheated the Fed needs to hike?  I don’t think so.

Sure, we would be rebounding from the bottom, but that’s to be expected.  That’s why the Fed is slowly taking its foot off the gas, but not yet pressing on the brakes.

I can’t stress this enough – stimulus is pulling forward consumption that would have otherwise occurred in the future.   A 0.5% bump to GDP this year will come at the expense of GPD in future years.  An increase in prices today means fewer price increases tomorrow.  The Fed is going to patiently wait to see how things look a year from now.

Besides, the Fed doesn’t care as much about PPI as it does about Core PCE.  While elevated, it’s nowhere near the 6%-handle the PPI just threw out.

I casually follow the Panthers because I live in Charlotte, but I just don’t really care about them.  The PPI is the Fed’s version of the Panthers.  Oh, that data point just came out?  I didn’t even realize it was playing today…

Just like what I really care about is the Eagles, the Fed really cares about Core PCE.  The recent surge of Core PCE to 3.6% reminds me of the Eagles Super Bowl run.  What a year!  Look at that trajectory!  We’re going to be on top forever!

(yes, I know, I have switched gears on you to the NFL, but I wrote this before I had enough info to know which NFL teams I could rag on and I needed it for the analogy – Go Birds)

Unfortunately, that Birds Surge was followed by a collapse into one of the most dysfunctional teams in the league.  Our Super Bowl hangover feels like a premonition for inflation next year.  The Fed (and others far smarter than me) expect inflation to cool off materially in the years ahead.   I wish I would have had a similar warning.  Here’s the Fed expectations vs BNP Paribas – trending below 2.0% throughout 2022. 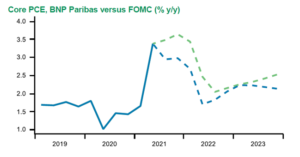 If Reality Matched Expectations, the Cowboys Would Win the Super Bowl Every Year

No team fails to live up to the hype as consistently as the Dallas Cowboys (sit tight Longhorn fans, we’ll get to you in a bit).  No matter how much the fans and prognosticators expect “this to be the year!”, the Cowboys fail to match the hype.  The same can be said for inflation failing to match expectations.

(But look how actual inflation has recently exceeded expectations – maybe this really could be the Cowboys’ year!?)

But will this recent inversion of inflation/reality be transient?  I certainly think so.  Something has to give, either actual inflation crashes back down or expectations spike.  By now, you know which side I’m on.

But FOMC members are human.  And as my first boss told us about economists, “If they were better at their jobs, they’d be traders.”  So, let’s see what traders at the big banks are thinking.

The NY Fed surveys traders at primary dealers (big banks) around expectations for various data points.  Here are the most recent results around GDP and inflation.  Look how GDP and inflation fall off a cliff after this year.  As we discussed earlier, this reflects the temporary boost that stimulus has that fades over time.  Borrowing from the future is just shifting consumption around, particularly for big ticket items.1

You’re skeptical, I get it.  This survey is still just 19 banks.  What does the market think?

In February, I wrote a newsletter entitled, “Don’t Buy the Inflation Hype Headlines”.2 I warned Longhorn fans that they were not, in fact, back.  No program benefits more a coaching change.  “We’d like to announce our new head ball coach, (Insert Next Guy Here).”  AP Top 25 voters trip over themselves trying to put UT in the top 10.  And then eventually they have to play the game and eventually run into one of those 3rd tier SEC teams that chant, “Woo Pig Sooie” and everything falls apart because a 3rd tier SEC team is better than a 1st tier Big 12 team.

OK, I didn’t really say that about UT, but I wish I had.  I was banking on you not clicking the citation, just like you haven’t been for any article that tries to make a point about covid…but I digress…

I also said it would be increasingly tougher to hold that belief while in the midst of the pricing surge, but that if we waited until 2022 inflation would be cooling.

Seven months later, despite my warnings, several Fed members are getting cold feet.  And so are our clients.  Inflation is everywhere!

Don’t trust the Fed officials?  Hard to blame you after revelations of active stock trading.  Don’t trust 19 big bank trading desks that possibly contributed to the LIBOR rigging scandal?  Fair.  But what does the entire market think?

If you ever want to know how strongly someone believes in something, have them put money on it. The 10-year breakeven rate represents market expectations for inflation.  The entire market is influencing this number, every single input involving someone putting money on it.

We’ve had nothing but elevated inflation readings.  The sky is falling, we’re headed for another 1980 scenario where headline CPI hit 14.8%, the state school kid in North Carolina is an idiot.

Since February, with all those factors, the 10yr breakeven rate has increased less than a quarter of a point.  And still well off the highs experienced over the last decade.

But the Fed, the economists, and most importantly, the people with big money riding on it, are suggesting we do not have a long-term inflation problem.  Ride out the storm and this time next year inflation will be well on its way to 2.0%.

Since I had to read through the entire survey to get the inflationary data I wanted, I figured it might make sense to include the results on Fed Funds.

In the next 3 years, those surveyed expect about 5 rate hikes.  While I believe this is too high, it should help reinforce the notion that something like 3.0% isn’t on the table.  Over six years, just 9 total hikes.  Floating rates will still be low for the foreseeable future, even if the Fed starts hiking.

Fed Funds over the next 10 years

One big difference between traders and our clients is that traders assume there will be a downturn at some point in the next decade and the Fed will have to cut rates.  Check out the expectations for a 10-year average – 1.68%.

Once the Fed starts hiking, we shouldn’t assume an unabated run up to double digits.  Or even 3%.

Despite all my warnings that inflation fears are overblown, I still think the 10T is probably too low at 1.35%.  My theory is that as (if?) the delta surge levels off and declines, the market will correct.  Ballpark, the more appropriate range is likely 1.50%-1.75%.

Interestingly enough, JPM surveys clients about their net long/short positions on Treasurys and they appear to be loading up on shorts again. 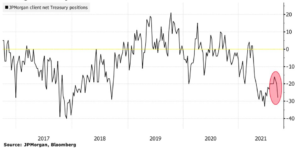 While this suggests upward pressure on 10T yields in the near term, keep in mind that a failure of rates to rise can eventually leading to a short covering squeeze that would push 10T rates towards 1.0%.  That’s not the base case, but a massive short covering is what led the 10T to plunge from 1.60% to 1.20%.

CPI is the big print this week, especially on the heels of last week’s higher than expected PPI print.  But we also get other inflationary data points like import prices and average hourly earnings.  Then we culminate with University of Michigan Forward Inflation Expectations, which will undoubtedly predict Jim Harbaugh will win a national title this year.

When these inflation reports come out higher than most of us have ever seen before, just ask yourself, “Do I think inflation will still be climbing this time next year?”  Let’s not overreact to an Ohio State loss just because we are smack dab of basking in the glow of it.  Reversion to the mean and all.

It will be challenging, but hopefully you are more mature about inflation than I am about the Buckeyes.

Why do I hate OSU?  Jealousy, mostly.

Ohio State loses, at home, to the #12 team in the country.

The week prior, Penn State had beat, on the road, the #12 team in the country.

I take solace in the fact that someone left a rubber ducky at midfield in THE Ohio State University stadium.  I’m so glad football is back! 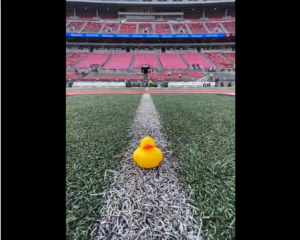