The Fed now projects to be on hold though year end 2023.  Specifically, it will not raise rates, “until labor market conditions have reached levels consistent with the Committee’s assessments of maximum employment and inflation has risen to 2.0% and is on track to moderately exceed 2.0% for some time.”

Pretty benign, but what are the key takeaways?

Atlanta Fed President Raphael Bostic also said that the trend will be important.  He indicated a 2.3% inflation reading that was expected to remain at 2.3% wouldn’t prompt a hike, while an upward trajectory of 2.2% then 2.4% then 2.6% would be more likely to elicit a Fed response.

That line is perfectly flat through year end 2023.  The market is even more pessimistic, not expecting a hike for five years.  Our eldest high schooler will have graduated college before the next hike (hopefully).

The market has LIBOR at just 0.75% in 2030 when our twelve year old is graduating college (also hopefully).

The Fed also raised its forecasts for 2020, while leaving the next few years unchanged for now. 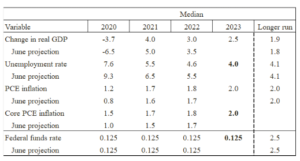 St. Louis Fed President James Bullard was on a panel Friday, saying “This is the biggest growth quarter of all time in the U.S.  It looks like 30% at an annual rate. Crazy number, way off the charts compared to anything we’re used to in U.S. post-war macroeconomic history.”  Not surprisingly, his projections are far more optimistic, forecasting UR of 6.5% by year end.  And the Atlanta Fed’s GDPNow forecast is calling for Q3 GDP to come in at 32%.

Somewhat surprisingly, there were two dissents, albeit for different reasons.

Kashkari – Not Dovish Enough
I’m not sure how the Fed could have been any more dovish, but Minneapolis Fed President Neel Kashkari wanted a more open-ended commitment.  He cited the inflation “ghost stories” of the last decade that prompted ill-timed rate hikes.  Sounds to me like he might be angling for a Fed Chair nomination.

Kaplan – Too Dovish
Dallas Fed President Robert Kaplan thinks the Fed should keep its options open in case inflation comes back more quickly than expected.  I usually align pretty closely with Kaplan, but I disagree with him here.  I just can’t envision a scenario where we are concerned about inflation over the next three years, so give the market some runway and start talking about hikes in 24 months.

The statement, as well as all the comments by FOMC members in the subsequent days, centered around inflation rather than unemployment.  It’s clear that a very low unemployment rate alone will not prompt a rate hike.

Is it any surprise?  Inflation expectations have really struggled to reach 3.0% since the financial crisis.  Here’s the University of Michigan’s 1 year inflation expectations index.  This is derived from the question, “How much do you expect prices to rise or fall in the coming year?”

Because over the last 20 years, expectations always overestimate actual inflation.  I don’t agree with Kashkari on his dissent, but I do think he has a point about inflation ghost stories (ignoring the fact that lumber is up 50% since April…).

Here’s the same graph of inflation expectations, but with actual inflation included.

In fact, actual inflation ends up lagging expectations by about 1.50%.  How many of us are reading this right now thinking about how inflation just has to pick up this time?  It’s my natural instinct, too.  But does it?

If actual inflation tends to undershoot expectations by about 1.50%, that suggests the Fed may be on hold until expectations approach 4.0%.  That’s just a back of the envelope guess, but it helps provide some context.

Recall from the first graph that inflation expectations are at just 1.7%…and all of us are thinking about inflation already.  Imagine how much more pressing inflation will need to be for expectations to approach 4.0%.

The Bank of America rates team put out a paper that attempts to quantify how long it could take for inflation to hit specific targets under the Fed’s new approach.  As a caveat, the starting point matters a lot.  Remember, the Fed is now using an average inflation target, meaning the last decade of benign inflation skews the numbers quite a bit…but, if you use 2007 as the starting point and set inflation at 2.1%, it could take 42 years before the Fed’s new goal of 2.0% average inflation is reached.

Admittedly, that’s an extreme example.  Let’s instead use 2018 as the starting point and assume inflation jumps to 2.1%.  It would still take 1.8 years before inflation would average 2.0% and the Fed would even begin considering a rate hike.  That’s why it feels like a near certainty that the Fed is on hold for at least three years.

Obviously, if inflation surprises to the upside, that accelerates the timeline meaningfully.  But this thought exercise highlights how impactful this new FOMC strategy could be on floating rates.

There is some non-zero chance that a brand-new analyst out of college this year never experiences 3.00% floating rates in their career.

Pretty light week for data, so expect most headlines to come from Fed speakers massaging the message.