There is no bigger sports pessimist than me, except maybe a few fellow Philadelphia fans.  But I went into Saturday’s Carolina Duke game thinking my Heels might actually have a chance.  Something about all the pomp and celebration about Coach K’s last home game maybe distracted them enough we could sneak in and steal one.  They had beaten us so badly a month prior they could be forgiven for overlooking us.  I would never have bet on it, but I felt like the odds of us winning were no longer 0%.  Hey, for me that’s a huge step!

Flashback to February 5th, the two teams were squaring off.  My Duke buddy was pushing for a wager.  The line was stupid, something like 3.5 points.  Zero interest. I told him I wanted 21 points.  He thought I was joking.  I was certain we were in for a drubbing.  He finally talked me down to 15 before I caved and said, “done.”  I should have held the line – we lost by 20.  Worse, he now had this ridiculous wager to hold over my head forever.  “I gave you 15 points, at home, and you still couldn’t win!”  God, I hate Dookies.  There was no way I was ever going to live this down.

And then Saturday rolled around.  I watched out of morbid curiosity, assuming the game would get out of hand.  And then we were winning.  I couldn’t respond to texts; I knew we would blow it.  Duke would make one of its patented runs that had crushed us before and that would be that.  Coach K would ride off into the sunset.  With 22 seconds left, we were up by 14 and I still refused to exhale.  If God is a Duke fan, they would pull it out.

They did not.  I wonder if God hates Duke like I do because he couldn’t get in, either?

Finally, thank goodness the Heels don’t have to play Coach K anymore, that dude was gooooooooooood.

The economy added more jobs than nearly any forecast called for, 678k.  Furthermore, the last two months were revised higher by a combined 92k.  We are about 2mm jobs short of pre-covid levels and the number of unemployed for 6+ months didn’t really change from 1.7mm.  Here are the winners from last month:

The unemployment rate dropped to 3.8% from 4.0% last month.  I hate to keep beating a dead horse, but just keep in mind that the participation rate is 1.5% lower than it was pre-covid.  Adjusting for this, and the comparable unemployment rate is 5.3%.  So, while 3.8% sounds like full employment, we’re really north of 5% on an apples to apples basis.

The plunge in average hourly earnings is an interesting one.  These have been trending higher as employers struggle to find workers, and they tend to be viewed as a leading indicator of inflation.

The sharp reversal could just be a correction from last month when omicron caused more than 3.5mm workers to call out sick.  That led employers to offer higher wagers and OT to anyone willing to come to work. Omicron cases fell off a cliff, and wage pressures subsided.  Check out the impact omicron had on call outs. 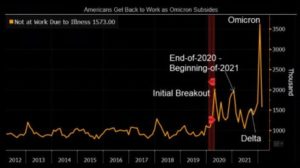 Or maybe the fact that most of the recent gains have been in lower paying service sector jobs, which is pulling down the average?

Either way, keep an eye on this because inflation hawks have been pointing to wage pressures as a significant reason to hike rates.

Cap prices exploded late in the week on news that Russia had pretty recklessly attacked a nuclear power plant.

Remember, the two primary drivers of cap costs are:

If you’ve priced a cap in the last few months, you have undoubtedly felt the pain.  The Fed did a 180, the market is suddenly pricing in 2.00% of hikes in the next year, and volatility jumped.

Look at what 2 and 3 year vol has done recently in the graph below.  This is a big reason why caps have gotten so expensive.  You aren’t just paying for the shift in rate expectations, you’re paying for the increased variance in outcomes.

Will the Fed hike 8 times?  12 times?  16 times?  And how much less confident are you in all of this than just three months ago?

But that drop was way more than offset by a spike in volatility (or what those of us in the biz like to call “vol”), and cap costs surged.  We saw prices jump 50%!  This despite the fact that the market thinks the Fed will hike slower!  What gives?

Option traders view vol like an asset class.  They literally buy and sell it.  When the world is going nuts, vol prices spike.

But even worse, liquidity in vol dries up.  If you owned vol heading in Friday morning trading session, are you really wanting to sell it?  Even if you can make a sizable return, you probably hold onto it.  Who wants to be unloading their best protection as we await news of a possible Chernobyl?

Imagine owning vol the way you might own Treasurys or US dollars.  When the world is imploding, do you sell just because you might have a good return?  No.  In periods of extreme stress, IRR doesn’t matter – survival does.

You walk into the office Friday morning to news that Russia attacked a Ukrainian nuclear plant that powers 20% of the country’s electricity.  Oh, and it’s on fire.

You turn to Google and what do you find?

What do you think happened to prices on vol?

In what universe would you sell the vol you already own?  Sure, you could sell it and get a huge return, but then what?  Now you’re left unprotected while you wait to see if Europe is about to have a nuclear fallout.

How does this impact you as a cap buyer?

When you try to buy a cap for your loan, the trader needs to buy vol from the market to hedge their position.  But we just discussed why no one wants to sell vol and the trader has no one to buy it from.  So, the trader offers more.  Still no takers.  They offer more.  And more.  Finally, they either pay such an extreme price that someone is willing to sell a small sliver of vol holdings or the trader charges you enough that they feel like they can self-insure until the dust settles.

This all drives up the cost they quote you to staggering levels, even though expectations for SOFR have actually dropped.

This doesn’t help you if you’re in the middle of buying a cap, but perhaps a lender will be more willing to negotiate on the cap if they know the pricing surge isn’t because rates are going up.

How to Talk to Lenders About Caps

Now that the cap price has exploded, what can you do?

Firstly, let’s revisit that vol graph that illustrates how nuts things have been the last three months.  If you sent this to a lender and said, “Can we work something out, this is crazy?”, I think they would be well within their rights to say no.  “Ummmm, yeah, this is precisely why we want you to buy a cap.”  The Fed went from no hikes to 8 hikes in the blink of an eye.  I wouldn’t blame them for not caving.

But if you got caught up in the most recent surge, it may be worth having a relationship discussion around the fact that prices spiked because of traders stockpiling vol, not another shift higher in rate expectations.

I would send them this table.  Look how sharply future rate expectations dropped in 24 hours.  The intent of the cap is to protect against rising rates, do they really want you to pay a 50% premium because of vol illiquidity?

Maybe they’ll give you a 30 day window to buy it.  Or just buy half today.  What if you begin escrowing for a cap purchase once the volatility dust settles?  Something.  I suspect many lenders will be willing to grant a request that isn’t just “prices are too high, I don’t wanna!”.

International atomic scientists are reporting no spikes in nuclear readings.  The fires were put out.  No reactors were damaged.  This won’t settle down overnight because markets are still on edge at the sheer recklessness of it all but paying for a shocking increase attributable to illiquidity isn’t in anyone’s best interest and hopefully lenders are willing to have a discussion around that.

QE ends this week.  Lots of inflation data.  The Fed goes quiet ahead of next week’s rate hike.

But now that the word nuclear has become a part of the Russian invasion, those headlines will dominate.