What Is a Swap?

A swap is a contract to exchange interest rate payments based on an agreed-upon notional schedule.  The most common swap is floating to fixed swap, where a client pays a fixed rate and receives a floating rate, like LIBOR.

Whether LIBOR goes to 0% or 20%, the borrower will always receive a floating payment on the swap that exactly offsets what he owes on the loan.  The net effect is a fixed rate of 3.75%.  Here’s an example using LIBOR at 0.25%:

The bank lays the risk off in the market at the same time the customer locks in the rate over the phone.  The swap marketer will usually say “let me put you on hold while I lock this in with the trader”.   Unlike with a fixed rate loan, the bank now has no exposure to rising interest rates.

The “market” is really just other trading desks and no one is betting against the client.  The desk simply quotes the rate available in the market and passes it along to the borrower.

But Wait, How Does the Bank Make Money in this Scenario?

Because the rate the customer locks in is actually higher than the rate the trader could lock in at – notice the new rate below.  The “market” offered 3.50% but the swap desk quoted 3.75% to the client. 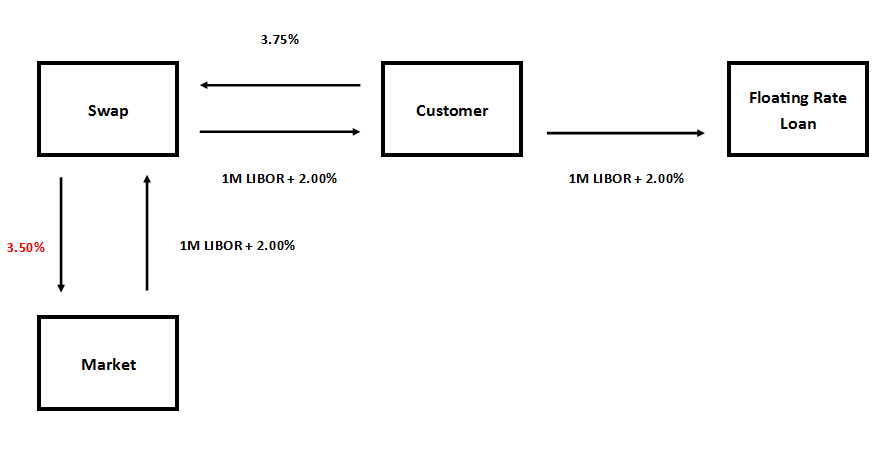 This 0.25% of profit is per year, effectively increasing the customer’s borrowing spread from 2.00% to 2.25%.  But the bank doesn’t earn this over time, it multiplies 0.25% per annum over the life of the deal and present values it back to day 1, capturing it as an upfront fee.

The swap credit charge has the same impact as increasing the loan spread by the same amount.

Frequently, the biggest risk on a swap is in the event of a prepayment.  While it is true that swaps can be an asset if rates climb enough, this happens less frequently than expected.  Here is the back of the envelope calculation for a swap breakage.  For illustration purposes, we assume a 10 year swap initially that is prepaid after 7 years and rates have not moved at all since the time the swap was locked.

If rates stay exactly the same, the swap will have a breakage of about $2,700,000 in seven years.  Much of this is attributable to the effect of rolling down the yield curve.  Three year rates are about 0.65% lower than ten year rates, so the swap naturally moves against the borrower over time.  Add in the profit the bank makes at execution and the profit the bank will make at the termination, and it becomes easier to see why swaps are so rarely in the money to borrowers.