Is the Fed Already Behind the Curve?

Is the Fed Already Behind the Curve?

The NY Fed’s recession model suggests there’s a high probability that we are already in a recession.  In fact, there’s only been one time the model has had readings this high and we did not end up in a recession – 1967.

As the graph below illustrates, this model suggests a 30% probability of a recession within the next year.

In previous newsletters, we’ve discussed how there are some potential parallels with the 1995 cycle.  My theory is that if Powell intervenes aggressively enough and quickly enough, a recession could be postponed.   But the 1995 timeframe shows only a 20% probability of a recession, and that peak actually came after the Fed started cutting rates.

In other words, Powell may need to cut even more aggressively than expected.  And the longer he waits, the more likely we end up in a recession.

Despite FOMC Dove Bullard saying the current situation “doesn’t call for 50bps” rate cut, I continue to believe there is a small chance the Fed does just that.

Or rather, that it should. 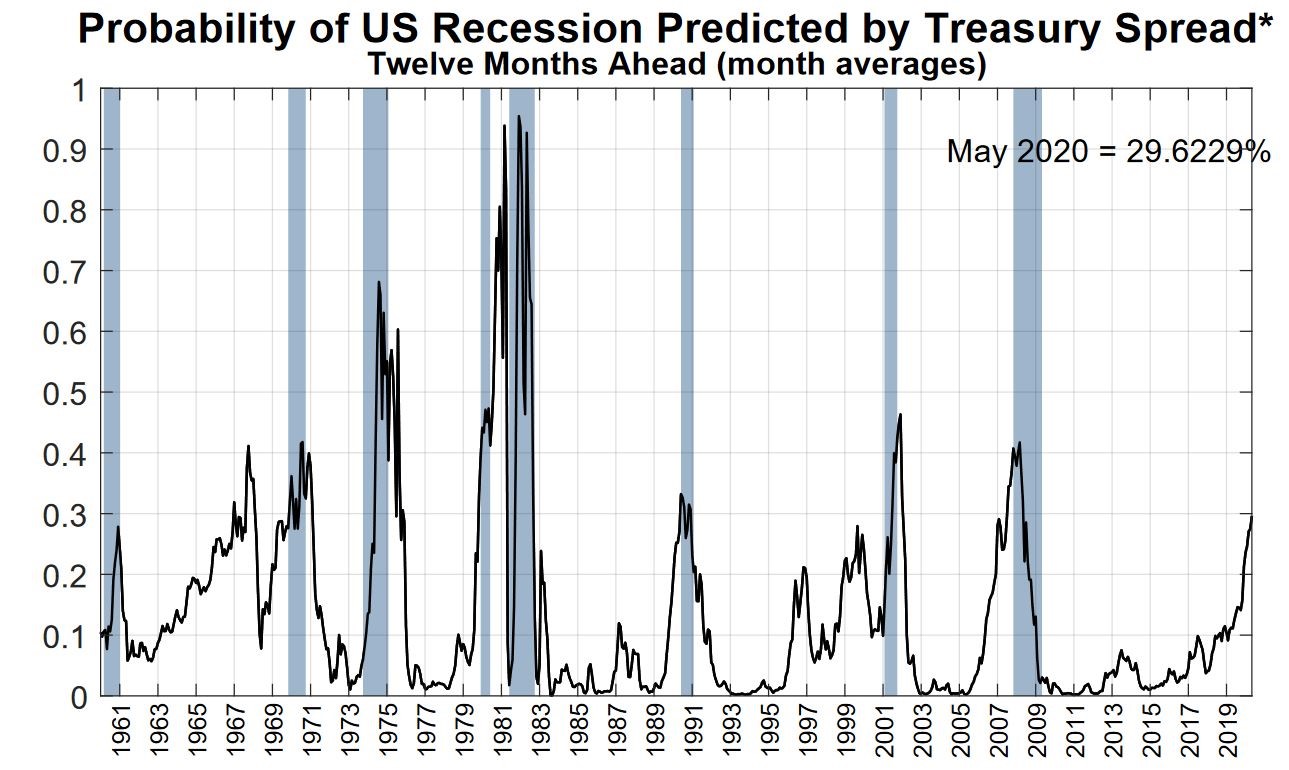 Before you tell you tell me I’m too cynical for you and that I’m just too pessimistic, there is some good news…oh wait, no there’s not.

When 3mL drops below 1mL, we have a recession within a year.

And after deducting for government spending, the economy has actually contracted over the last year.  In other words, we could already be in a recession.

But there is some good news.  Financial Conditions are actually easing, which at a minimum suggests conditions are not restrictive enough to cause a material slowdown.

The June 9th newsletter was entitled, “Why a Trade Dispute Resolution Won’t Drive Rates Up”.  I’ve included the link below in case you missed it, but the core argument was that lack of inflation was keeping a lid on yields.  While a resolution with China may prevent the 10T from breaching 2.0%, it’s unlikely to drive rates up through 2.50% (https://www.pensford.com/why-a-trade-dispute-resolution-wont-drive-rates-up/).

With Core PCE coming in last week at just 1.6%, it’s tough to envision a scenario where the 10T detaches materially from that number.  At its widest gap, the spread between the two was just over 1.00%; however, that came shortly after the tax cuts were passed in late 2017.  The 10T spiked on inflation expectations.  A resolution with China alone won’t create inflation expectations like the tax cuts did.  Even if the current spread gapped out to 1.00%, that still only puts the 10T at 2.60%.

Furthermore, Doubleline’s CEO Jeffrey Gundlach has a very simple sanity check for 10T yields that we have highlighted in previous emails.

And while markets will welcome positive developments out of the G20 Summit, Trump has yet to offer specifics.   I suspect his statements will relieve downward pressure, but won’t necessarily cause a lot of upward pressure.  This is more like a sigh of relief than an all clear signal.

I can see the 10T moving up to 2.10% – 2.15% today if markets are feeling particularly optimistic, but I’m not convinced it will break 2.25% just on some ambiguous news about the trade dispute.  There are too many other red flags right now for the bond market to make a sudden U-turn.

And not to beat a dead horse, but we don’t have any specifics yet.  Haven’t we been down this road before?  The news broke Saturday morning, meaning traders had all weekend to think about the news rather than just immediately slamming the “sell” button on their Treasury holdings.

I expect the movement on Monday to be muted.

Holiday shortened week, with economic data headlined by Friday’s job report.  Last month’s report posted a surprisingly weak 75k gain.  Will we see a reversal?  Or was that the start of a slowing trend?

Markets close early on Wednesday, so liquidity will start drying up around lunch time.  Then of course, markets are closed all day Thursday.