Jobs Report – What in the World?!

The unemployment rate came in at 13.3% vs forecast of 19%.  The labor force participation rate, the usual culprit for employment anomalies, actually increased.

According to the BLS report, the unemployment rate would have been about 3% higher (16%) if “employed but absent from work” respondents had been included…but still, this was way better than expected.

The market interpreted this as “we’ve seen the bottom and now the recovery begins.”

If there are any fiscal hawks left in Congress, this type of report could give them cover fire to refuse additional accommodation.

This caused the 10 Year Treasury to spike, actually hitting 0.95% temporarily before settling back down around 90bps.  It’s hard to believe the 10T was 2.20% just a year ago…

It looks like the 10T is about to establish a new range, with the floor being around 0.87% and the ceiling around 1.20%.  The 1.00% threshold is more psychological than technical, but will likely dictate the magnitude of the upcoming moves.  Unless the job data turns out to be completely fraudulent, the worst would appear to be behind us and the last month or so is likely the trough.

That doesn’t mean the 10T is headed to 2.00%, it just means the market will stop pricing in worst case scenarios.  Now it can turn its attention to things like GDP and inflation, which are likely to be subdued for the foreseeable future and may prevent a bigger move upward.

The Fed seems increasingly likely to rely on Yield Curve Control (YCC) to cap shorter term maturities (<3 years) while allowing the long end of the curve to “float”.   The Fed will place a cap on Treasury yields out to a certain part of the curve, and intervene as needed to keep a lid on rates.  The likely result?

Front End of the Curve
Rates will be anchored at the targeted level and vol will collapse.  For those of you that remember mid-2012 when the Fed committed to keeping rates low for at least three years, it will probably feel like that.

Long End of the Curve
Higher long-term yields and a steeper yield curve.   This would be the sort of thing that could cause the T10 to break 1.20%.

The Fed (and the federal government and the agencies) deserve credit for the intervention thus far.  It will be challenging to extricate ourselves from this intervention (hysteresis cough cough), but I would rather argue about being overly reliant on accommodation than to be stuck in a Great Depression bragging, “at least we didn’t invite any moral hazard.”

Speaking of extricating ourselves from accommodation…

The CARES Act has made some substantial accommodations for homeowners and renters on agency-backed loans, yet it is set to expire at the end of July.  Given how successful it appears to have been at avoiding a total collapse, I would expect additional measures in the coming months.

Homeowners
About 70% of residential properties are backed by a federal agency.

Renters
About 25% of rental properties are backed by an agency.  The CARES Act provided a 120 day moratorium of evictions, but numerous city/states have intervened as well.  We don’t need you rich landlords evicting people, creating a homeless crisis in the middle of a pandemic…

NMHC reported nearly 91% of renters made full or partial payments in May, compared to 93% a year ago.  Pretty solid.

Takeaway
It certainly appears as though the rapid intervention and added stimulus has helped avoid a collapse in the housing market.  One major crisis at a time please.  Kudos to the government, it has handled this much better than the financial crisis.

But what happens when CARES expires at the end of July?  Do we see another round of stimulus checks?  Forbearance extended?  How do you underwrite a deal in this environment?  How much moral hazard do we risk with the continued moratorium on evictions?

At some point in the near future, we need to start letting the market shake things out.  Otherwise, we are just delaying the inevitable.

In 2019, TSA checkpoints averaged about 2.25mm travelers each day.

In April of this year, that number averaged just 110k.

Over the last week, this number is back up to 323k.

The Great Thawing has begun… 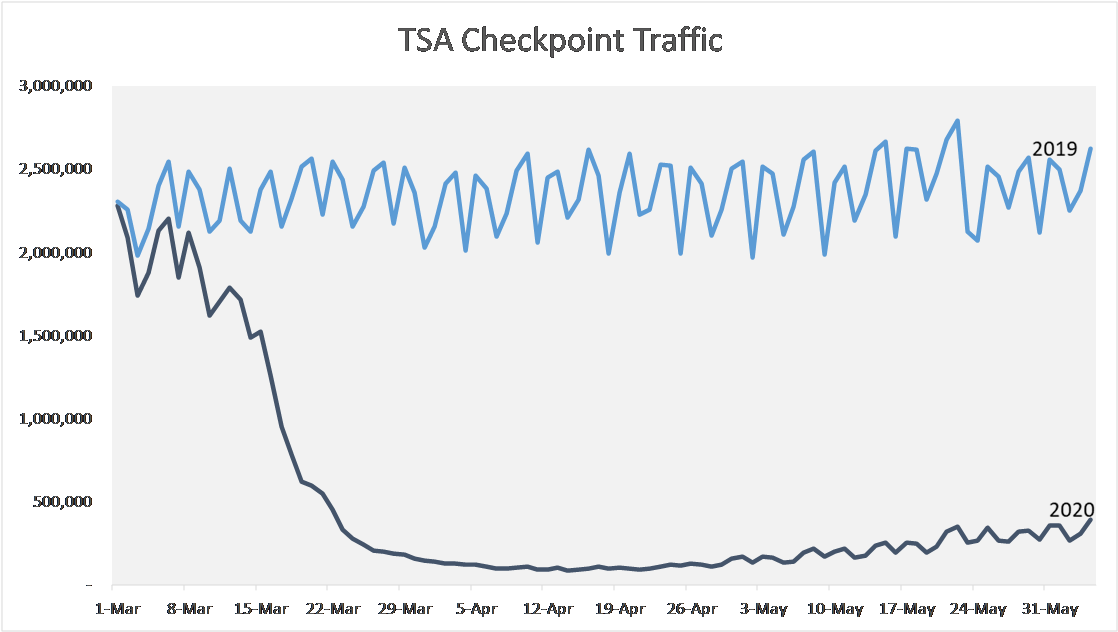 FOMC meeting and honestly I have no idea what else 2020 has in store for us this week.