JPM Calls for a Double Dip

A division of the Intercontinental Exchange (ICE), the administrator for LIBOR, said it would be consulting with the market (whoever that is) about ending the publication of LIBOR in euro, yen, Swiss franc, and sterling by December 2021 as expected.

The Financial Times reported that Phil Lloyd, head of market structure and regulatory customer engagement at NatWest Markets said the two statements created some confusion. “It shows the dollar market is probably further behind2.”

That’s right, we are starting to hear the first inklings that maybe, just maybe, LIBOR will still be in place beyond December 2021.  With over $300T (that’s not a typo) in outstanding contracts tied to dollar LIBOR, regulators have a daunting task with a year to go.

While any transition will involve some hiccups, I can’t imagine the regulators forcing a change if the markets aren’t ready.  Their entire purpose is to improve markets and transparency, not to yank the rug out from everyone.

Furthermore, I can’t imagine banks messing around with this transition.  Lots of clients call us, worried that the bank will take advantage of the switch.  I don’t see it.  Which bank wants to get a call from a regulator saying, “We have customers complaining you are taking advantage of them while you switch to SOFR?”

Separately, the regulators still haven’t given definitive guidance about whether LIBOR will be forcefully discontinued, or simply allowed to fade to black, à la Prime.  This makes us think…maybe they haven’t decided?  Isn’t there some chance that legacy LIBOR contracts are allowed to continue with LIBOR, while new loans/contracts are “encouraged” to use SOFR?

JPM made it official on Friday – it is forecasting an economic contraction to start off 2021.  Yay.

The goods news is that it’s just a 1% contraction, not the -33% we saw earlier this year.  “At that time the reopening of the economy provided a powerful tailwind to growth. The economy no longer has that tailwind; instead it now faces the headwind of increasing restrictions on activity.”

“The holiday season—from Thanksgiving through New Year’s—threatens a further increase in cases. This winter will be grim, and we believe the economy will contract again in 1Q, albeit at “only” a 1.0% annualized rate,” JPM chief economist Michael Feroli wrote.

The surge in cases will lead to contraction through the winter, and then the economy will rebound in the middle of the year as vaccines are more widely distributed.  “The early success of some major vaccine trials increases our confidence that such medical intervention can limit the damage that the virus has inflicted on the US economy. (Alas, some lasting damage still seems inevitable.)”

Treasury Secretary Mnuchin told the Fed to return unused money from five emergency lending facilities and to terminate the programs at year end.  This caused rates and stocks to drop.  Ahhh, government ineptitude.

Mnuchin has a point.  Markets are stable/liquid, much of the money has gone unused, and financial conditions are at an all-time “accommodative” level.  Long-time readers will recognize this as my favorite graph – financial conditions.  Money is as easy as it ever has been.

But the Fed would prefer those programs to be available if needed.  The programs, even if untapped, send a signal to the markets.  “It’s here if you need it.”

The timing is particularly troublesome given the surge in cases, rising delinquencies, and oval office transition.   It feels a bit like a temper tantrum, or at least a poke in the eye of the incoming administration.

The Fed made an official statement, saying it, “would prefer that the full suite of emergency facilities established during the coronavirus pandemic continue to serve their important role as a backstop for our still-strained and vulnerable economy.”  That’s tantamount to monetary policy smack talk!  Jay Money Powell throwing shade at Mnuchin!  How long before he adds, “Can you leave the lights on for Lael?”

This is pushing the Fed into the same corner it found itself post-financial crisis.  Congress can’t come to an agreement on how to work together, so it bullies forces the Fed into action.  Is pushing out the maturity of QE purchases really going to spur economic growth?  C’mon.

A fiscal response is the rising tide that lifts all ships, not just the ships that own assets and benefit from low rates.

LIBOR/SOFR are the rates that ate too much turkey and have passed out on the couch.  Wake them up in three years when the Cowboys might be good again.

The 10T?  I suspect we’re rangebound for the time being.  Optimism about a vaccine may be temporarily overridden by the surge in cases and the subsequent political response.  Oh, plus the lack of stimulus.

Just keep in mind – if you buy into the narrative that the vaccine will largely eradicate COVID in the second half of next year, rates will move up well in advance of that.  Bloomberg’s rate team projects a much steeper yield curve over the next two years than consensus.  They put the 10T at 1.50% in a year and 1.75% in two years. 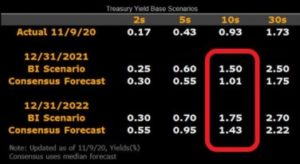 Markets closed on Thursday (obviously).  Markets are technically open Friday, but with so few traders around, liquidity will be thin.

Lots of data crammed into the holiday-shortened week, with GDP and Core PCE (Fed’s preferred measure of inflation) as the headline acts.  Manufacturing data, housing numbers, consumer confidence, and durable goods are the opening acts.

The amount of turkey I consume and how my football teams do likely dictate whether there’s a newsletter next Monday.  Either way, happy Thanksgiving!