Medical Models are as Imprecise as Economic Models

Four weeks into self-isolation and our kids are starting to self-regulate their diets, which means things are really getting dire.  Our son said, “Please don’t buy any more Toaster Strudels.  I’ve had like four today.  And by four, I mean eight.”  It didn’t even phase me that he took down an entire box of Toaster Strudels, I was hung up on the fact he didn’t want us to buy any more.  Quarantine is doing weird things.

Also, one of our daughters got an internship at The Met and it made me realize how badly I want NYC to recover.  I am not a New Yorker, it’s not my city.  I complain about it incessantly when I go.  But I love being able to do a million things.  I like going for three days and enjoying the whirlwind.

Inevitably, I end up complaining about the sheer number of people and how I could never live there.  How crowded restaurants are.  How loud it is at night.  But as we kicked around the idea of what we would do while visiting her (if she can even go), I realized how badly I missed the idea of NYC just being NYC.  It’s the heartbeat of the country.  I just like knowing I can go to NYC.  Hopefully they are getting through the worst of it and there’s a light at the end of the tunnel.

Medical Models are Just as Imperfect as Economic Ones

During his daily briefing on Saturday, New York Governor Andrew Cuomo said, “The worst thing that can happen is we make the misstep and we let our emotions get ahead of our logic and fact.”

This struck me as very ironic.

Cuomo has garnered a lot of attention lately.  He comes across as data driven, composed, and thoughtful, particularly in contrast to Trump’s off the cuff ramblings.

Cuomo really popped up on my radar when he demanded 30,000+ ventilators and told Trump to pick which 26,000 New Yorkers die.  About 1% of all covid-19 cases require ventilators.1

So I dug in a bit.  As a caveat, it’s challenging to separate ventilators from ICU beds, but they typically go hand in hand.  There’s also a difference between ICU beds and regular beds. I think of ICU beds as those with ventilators, while regular beds are those that require hospitalization but not a ventilator.

Here’s a timeline illustrating how critical projections have changed over the three weeks. 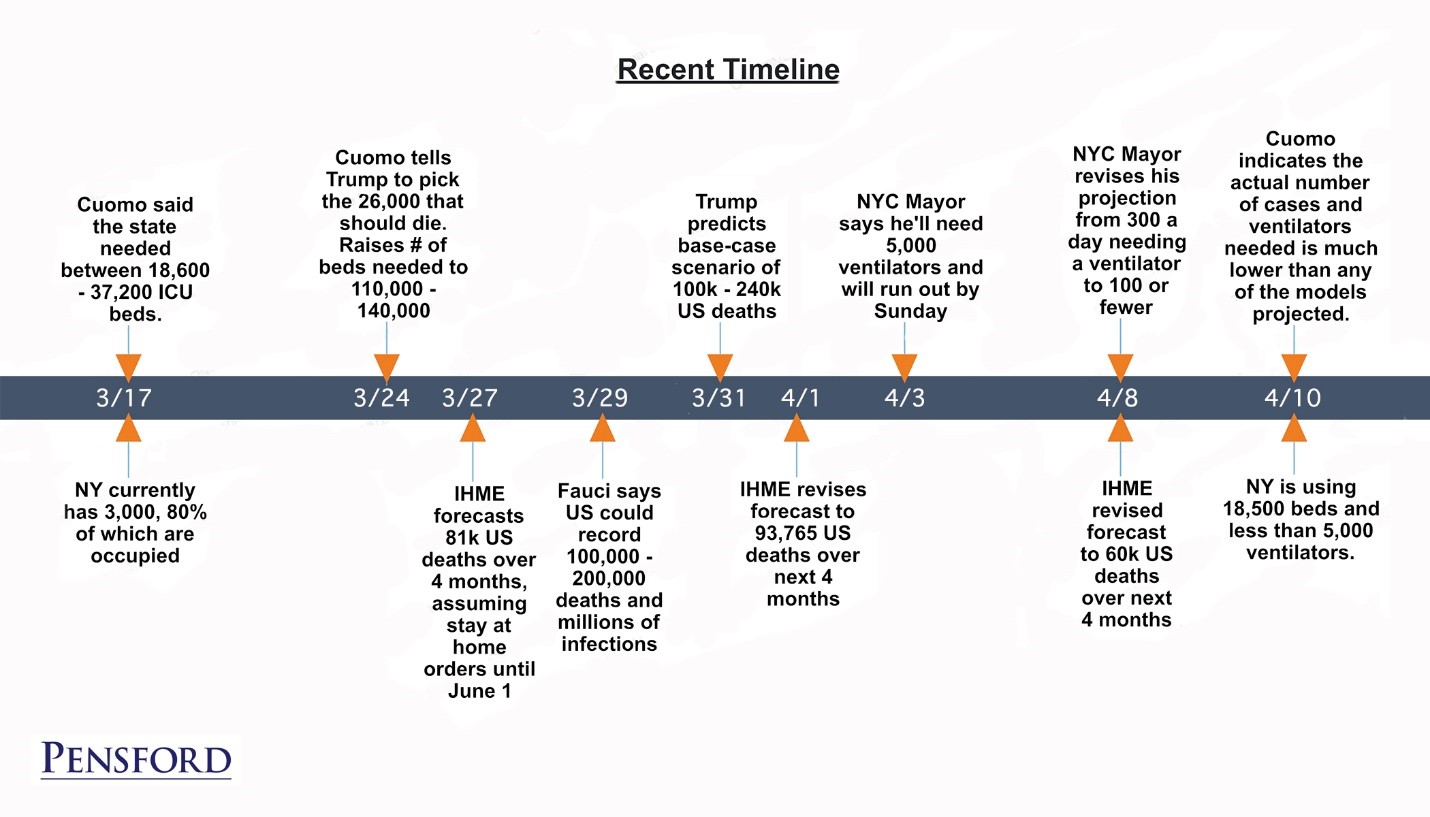 March 27
The Institute for Health Metrics and Evaluation (IHME) at the University of Washington’s School of Medicine, the most frequently cited covid-19 model, forecasts 81k American deaths over four months even if the country is under stay at home orders until June 1.

It also forecast that a total of 41 US states will need more ICU beds than are currently available.

March 31
President Trump’s pendulum swung too far, suddenly predicting a best-case scenario of 100,000 to 240,000 American deaths.4  I have no idea where his numbers came from.

April 1
IHME revises forecast to 93,765 deaths over the next four months.

April 3
NYC Mayor Bill de Blasio said in a television interview that NYC would need 5,000 ventilators this week. “We predict by something like Monday or Tuesday 5,000 people in our ICUs, intubated, fighting for their lives with COVID cases.”

“I don’t know after Sunday if we’re going to have what we need,” he said.

Additionally, the IHME revised its forecasts to 60,000 American deaths over the next four months.  The CDC estimates that 61,000 Americans died from the flu during the 2017-2018 flu season.

April 10
Cuomo indicates the models from just two weeks ago dramatically overstated the number of hospital beds needed.  “The actual curve is much, much lower than any of them projected,” Mr. Cuomo said.6

There’s no doubt that drastic measures have saved lives.  But I wonder how many?  And what happens once we lift these restrictions?

Remember, and this is really important, the models that Cuomo was basing his decisions off of assumed a full lockdown through the end of May.  We can’t chalk it up to the restrictions working.

But Cuomo was just looking out for his constituents, exactly what a governor is supposed to do, right?

According to a Reuters article on Friday, Cuomo’s push for additional ventilators may have come at the expense of other states.

“On the final Thursday in March the Arkansas team in charge of procuring ventilators thought they had scored a coup: a vendor had agreed to sell them 500 of the breathing machines critical to keeping COVID-19 patients alive at $19,000 each.  The next day they were told the deal had vanished because a buyer representing New York was offering to purchase 10,000 units, pay cash upfront and double the price, a deal the vendor could not turn down.  The office of New York Governor Andrew Cuomo did not respond to a request for comment.”

Arkansas has 785 ventilators and they were seeking just an additional 500.  Their order got squashed by the state of New York.  How many Arkansians will be affected?  Yes, I had to look up the plural for Arkansas citizens, don’t judge.

Michigan has 2,800 ventilators and is seeking an additional 27,500.  Did New York get at any their expense?

There are unintended consequences from making decisions based on incomplete data.  We have a perverse incentive structure around scarce resources and those making the most noise with the most money are winning.

We feel totally comfortable questioning economic and financial models all the time.  No one takes a GDP forecast as fact.  But when it comes to medical modelling, we seem very uncomfortable raising our hand.  It’s like we are insensitive, bad people if we suggest maybe the models aren’t 100% accurate.

“The worst thing that can happen is we make the misstep and we let our emotions get ahead of our logic and fact,” Cuomo said.

That ship has sailed, and well-intentioned leaders like Cuomo have been piloting the ship.

At least some portion of 30 million Americans will lose their jobs because of it.

Stanford epidemiologist John Ioannidis says we have massively overestimated the fatality of covid-19. “When you have a model involving exponential growth, if you make a small mistake in the base numbers, you end up with a final number that could be off 10-fold, 30-fold, even 50-fold.”

Ioannidis continued, “If I were to make an informed estimate based on the limited testing data we have, I would say that covid-19 will result in fewer than 40,000 deaths this season in the USA.”7 (emphasis mine).

This stands in stark contrast to a confidential presentation on Thursday by the Homeland Security and Health and Human Services, obtained by the Failing New York Times, which made some striking worst-case scenario forecasts.8

If we raise the question of lifting restrictions, I can hear the chorus already, “You choose which 200,000 Americans die.”  But that’s far less than the 2-4 million we were hearing a month ago.  And what if Ioannidis is right and it ends up being less than 40,000?

Also, notice how in both those scenarios from the graphics, 85% of the deaths come from those 65 years and older.  Dumb question from the state school kid with no medical training whatsoever – can’t we figure out a more targeted shut down that incorporates that sort of data?

As soon as I raise the issue of returning to normal, people start shouting, “Don’t do it now, it’s too soon!”  The IHME’s Dr. Murray recently said, “It’s enough to say that if we were to stop at the national level May 1, we’re seeing a return to almost where we are now sometime in July.”  Well then we definitely shouldn’t, right?

But if IHME’s models have consistently overstated deaths, shouldn’t we factor that into those projections about what would happen if we lift restrictions?   Don’t forget, IHME’s models have assumed we are under stay at home through the end of May, so it’s not enough to simply say, “The drastic measures are working and that’s why his models were overshooting.”

Those models were already assuming full lockdown through the end of May, and they have been revised lower numerous times in just the last few weeks.

I’ve watched Dr. Murray and spent a lot of time on the IHME’s site.  Dr. Murray strikes me as very thoughtful and unquestionably qualified.  He’s the first to admit the models are imperfect and rapidly evolving.  I don’t place the blame on him and others like him performing invaluable research in real time for idiots like me to judge.

The blame falls on us and our leaders for assuming medical models are foolproof.  That it’s better to be safe than sorry.  For allowing our politicians to base decisions on these models.  For criticizing anyone that dare question the value of human life in an economic context.

The newest talking point from the flatten-the-curve-at-all-costs crowd is that lifting too soon won’t have the economy return to normal anyway.  People won’t feel confident tomorrow just because we lift today.  I agree.

But the psychological impact on consumer demand will be in place until we have a vaccine, regardless of when we lift restrictions.

The more jobs we lose along the way, the longer the economic scarring will last.  Why not get most Americans back to work and try to avoid the worst-case economic scenario?

I hope at some point the data-driven, well-intentioned governors like Andrew Cuomo will shift their message in an acknowledgement that perhaps their data is imperfect.

The economic scarring of each additional week of 6mm jobs lost will be long lasting.

I can’t wait until I can go back to talking about the boring universe of interest rates.  But they have been rendered mostly irrelevant.

The Fed’s balance sheet is ballooning.  During the multiple rounds of QE, it peaked at $4.5T.  During balance sheet normalization over the last few years, it got down to $3.8T.

Two weeks ago, the Fed was buying $75B per day, basically as much as any single month during QE.  It appears as though we are on track for a $10T Fed balance sheet of Treasurys and MBS.

The same is happening around the globe, with net purchases of $1.4T in March alone. 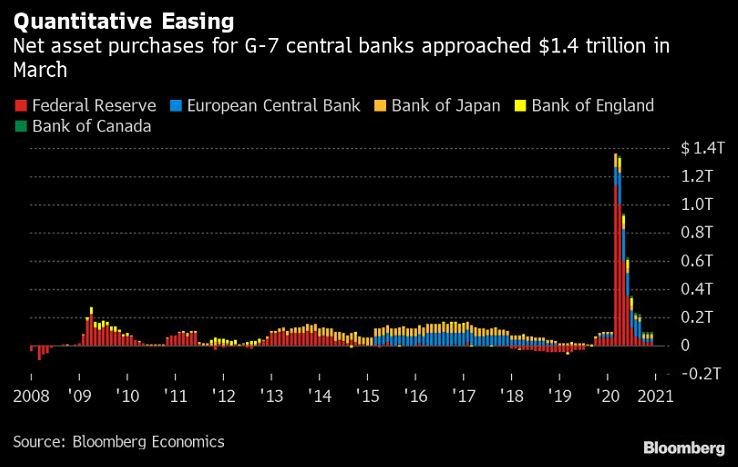 I have no idea what rates are going do.  We are in unprecedented times.  Before the economy fell off a cliff, I said there are three primary drivers of long-term interest rates.

In the near term, the Fed is committed to keeping yields low.  As we discussed a few months ago, they may even put a cap on Treasury yields.

But longer term, I wonder what sort of impact a $10T Fed balance sheet has on financial markets?  Or a trillion dollar deficit?

What if markets start to believe the worst-case health scenarios will not materialize?  That maybe the models overstated the number of deaths?  That politicians like Cuomo will not keep their constituents on lockdown as long as originally feared?

Goldman is projecting a 34% contraction in Q2…but a 19% rebound in Q3.  If the market starts to wrap its brain around an economic rebound (Point #1) and wonders how the massive federal deficit may impact inflation (Point #2) and global yields are flat or even begin to climb as central banks bail out economies (Point #3), there is at least some chance the 10 Year Treasury will experience upward pressure at some point in the future.

Remember, on a long enough timeline, I am always right.