My Cup Runneth Over

What a week.  My cup truly runneth over.  Let’s see…

The Heels blow out Zuke.  At Cameron.  Few things bring me more joy in life than watching 10,000 Dukies giddily spend several thousand dollars to watch their team get blown out.

The Patriots owner got busted for solicitation.  The last thing I would ever expect from the Pats organization is a cheater.  I guess dating models has some downside after all, which drove Kraft to fly south (both literally and figuratively).   “If anyone can beat a charge involving videotaping, it’s the Pats.” – Meek Mill.

Trump’s election fraud claim is totally vindicated when my home district (NC-9th) approves an election do over after the Republican pastor-turned-candidate got sick with an illness that effected his memory about whether he hired a firm known to illegally manufacture absentee votes.  Fortunately, that candidate’s son was not affected by the same bizarre memory-loss inducing illness and he had lots of details about cautioning his dad about the firm.  Oh, and emails.  Lots of emails.  Maybe his mom is the one that should have been a pastor.

Some actor I’ve never heard of orchestrated a fake attack on himself in an attempt to blame it on MAGA supporters.  He hired two brothers he worked with on his show that I’ve also never heard of and then paid them with a personal check.  Pretty please, with sugar on top, tell us you paid them with a check so you could take a tax deduction.

The Mueller witch hunt report is coming to a close.  Trump critics point to the 34 indictments, seven guilty pleas, and four Trump associates in prison as proof there’s something there.  Fact-casual supporters retort, “Sure, but the Salem witch trials found 19 people guilty – so there!”

Dianne Feinstein is in hot water for scolding kids from the Socialism is Awesome Because Everything is Free Movement Sunrise Movement for demanding she back the Green New Deal.  The only people criticizing Feinstein are those without kids.  The real surprise here is how incredibly restrained she was.  I would have put them in timeout or taken their phones.   Feinstein said, “You know better than I do, so I think one day you should run for Senate.”  That is basically a senator’s version of “When you’re a parent, you can ruin your kids anyway you want.”

I left Friday afternoon for a volleyball tournament 8 hours away that hasn’t ended as of 4pm Sunday.  My takeaways

Are We Sure 10 Year Rates Won’t Climb? 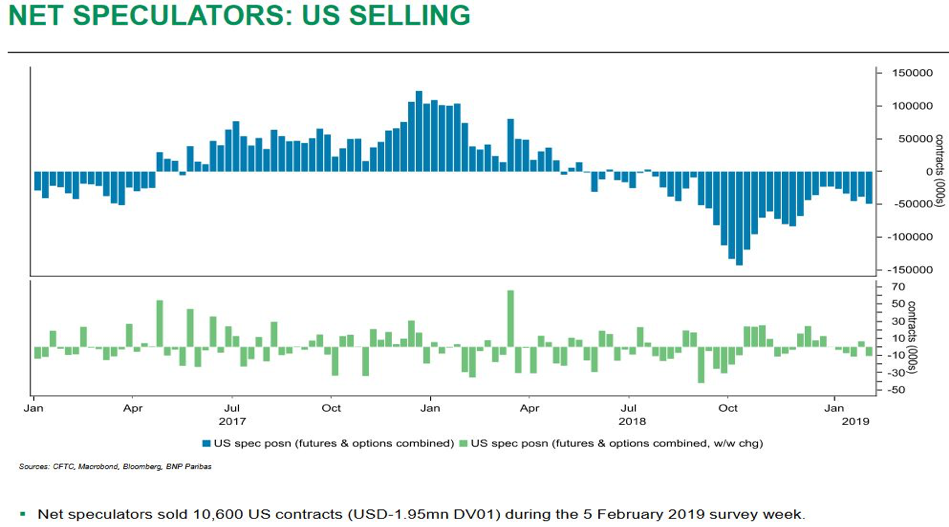 Bloomberg’s Lisa Abramowicz tweated “There’s a growing sense that longer-term U.S. rates will rise in the near term. The short interest on BlackRock’s $13 billion 7-10 year U.S. Treasury ETF has surged to a record high.”

Now that one huge event risk (the Fed hiking us into a recession) seems to have been taken off the table, traders are starting to dip their toes back into the short water.  I’m not convinced the T10 will spend 2019 in this very tight range.

A fair amount of data will be released next week.  Housing data and Durables Goods mid next week.  GDP on Thursday and PCE and ISM data on Friday.

Lots of Fed Speak.  Powell will testify before the Senate Banking Panel and will also give a speech Thursday.

And now that you just got the first ever one page newsletter, your cup runneth over, too!