The economy added 261k jobs in October, fully rebounding from last month’s negative print.  In fact, last month’s NFP was revised up from -33k to +18k, reversing the one month of job losses in 85 months.  The streak is alive and well!  Check out how consistent the job gains have been:

Either the economy is doing pretty well or someone needs to tell the BLS to inject at least a little bit of volatility in their numbers so we don’t start questioning whether the system is rigged…then again, the number of Americans not employed hit an all-time high of 95.38mm.

The hurricane effect last month most directly impacted waiters and bartenders, who experienced a staggering 111k jobs lost.  Of October’s 261k gains, 88k were attributable to this group – essentially a rebound effect from the previous month.

Average hourly earnings continue to pose a problem for the Fed, which dropped to its lowest level in 18 months.  Coupled with the Core PCE print on Monday, there is little signs of inflation.

Benign.  The Fed said little and basically left the door open to a rate hike in December. The statement highlighted strength in economic activity while conceding inflation continues to lag.  Casting that concern aside, the Fed suggested that inflation will “stabilize around the Committee’s 2% objective over the medium term.”

Considering the statement’s focus on economic growth, the Fed is claiming to address its inflation mandate by conveniently focusing on GDP instead.  If inflation ever reaches 2%, they’ll switch gears and claim that’s the focus…and if inflation fails to reach 2%, they can simply adjust the target lower and tell us why there’s been a structural shift in inflationary pressures.

Either the Fed is no longer data-dependent, or it is relying on whatever data happens to justify its position at the time. 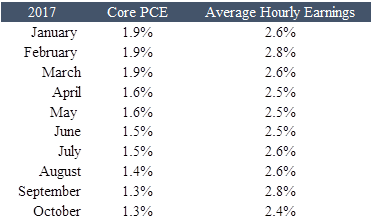 During recessions, the Fed has typically slashed Fed Funds by about 5.00%.  With FF at 1.00% – 1.25% today, that’s not possible whenever the next recession arrives.  If the market isn’t puking over the possibility of a rate hike in December, why not squeeze another one in?

We’ve been arguing that the Fed will struggle to hike with the yield curve flattening…and we’ve been wrong.  We haven’t expected a hike in December but it is certainly looking like the Fed will hike despite the lack of inflationary pressures.

On Friday, the yield curve reached its flattest level since 2007, with the spread between the 10yr Treasury and the 2yr Treasury at just 72bps.  Although the market is pricing in a 100% probability of a rate hike, the long end isn’t buying the growth story yet.   A continued flattening of the yield curve could be problematic. 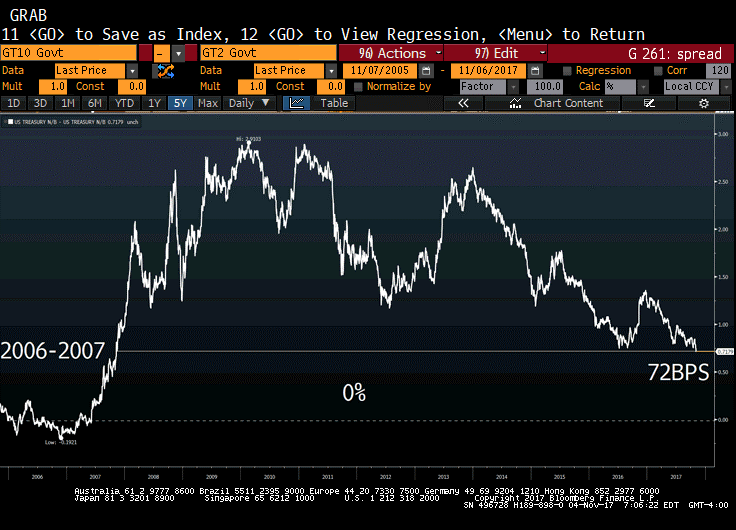 The 2yr Treasury yield is generally considered market expectations for the average of Fed Funds over the next two years.  If Fed Funds is 1.00% and the 2yr Treasury is 1.50%, it suggests the market thinks Fed Funds will climb to 1.50% over the first year and to 2.00% the second year, averaging 1.50%.

Let’s take a look at some potential outcomes and why yield curve steepness matters.  Assume:

The 2yr Treasury is 1.62% today, its highest level since 2008.  Where might it be following a hike in December and what impact will that have on the yield curve steepness?

The Fed will have a tough time avoiding yield curve inversion discussions unless,

Of these, the most ideal outcome for the Fed is that the 10yr Treasury climbs.  Balance sheet normalization is intended to do just that.  Thursday’s Federal Reserve report on its portfolio holdings shows a nearly $6 billion decline in its holdings of Treasury securities – the biggest outright weekly decline since 2012.

Regardless of what an inverted yield curve suggests about a recession, there is a very real possibility that cap costs are going up dramatically in the coming months.

Trump announced the appointment of Jerome “Jay” Powell to be the next Fed Chair and the market breathed a sigh of relief.  Taylor or Warsh would have likely caused a violent market response, so his announcement is more about who wasn’t nominated rather than who was nominated.

Powell has voted with the consensus and is likely to maintain Yellen’s policies.  Unlike Yellen, he’s a Republican and he has argued against banking regulations.

Powell is a lawyer, not a PhD in economics, which means he will feel like a bundle of charisma compared to his predecessors.  It also means he might lean on the board of governors more than Yellen did because he is unlikely to be running his own economic analysis.  With four remaining vacancies, those eventual appointees might carry more influence than they would have under a PhD econ. 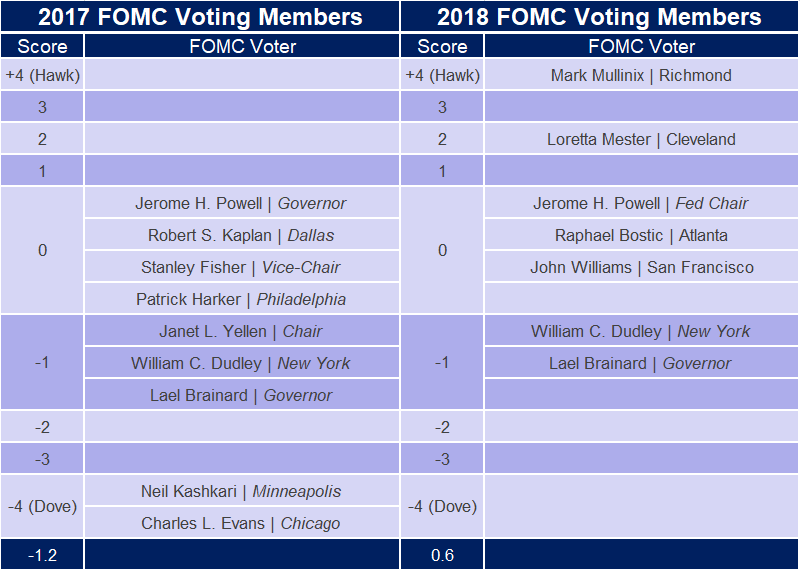 Powell will have challenges of navigating higher rates despite stagnant inflation, reducing the Fed’s balance sheet, the unknown effects of tax reforms, pressure from the WH, and global withdrawal of accommodation, and a recession at some point.  One potential benefit that Yellen never had was a unified WH/Congress (if that’s what we actually have) more willing to chip in with fiscal assistance to spur growth rather than relying on monetary policy as a cure all.

Far less data this week, but Fed speeches will ramp back up to reinforce last week’s message.   No real data of significance until Friday when some secondary inflationary data is released, but otherwise pretty quiet on that front.

She benefited from inheriting an economy with a recovery already underway and may be lucking out by being ejecting (or being ejected) before the next recession hits.  Time will tell if the incredible amount of quantitative easing has created asset bubbles that just haven’t burst yet, but readers of this newsletter are likely in a better position than they were when she took office almost four years ago.