Not All Dots Are Created Equal

If inflation came in higher than expected, why did rates drop?  Because most of the outlier numbers came from one-time purchases.  Autos comprised a third of the increase. 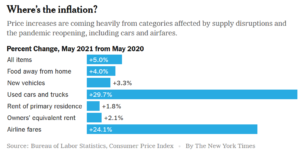 Bloomberg estimates that 52% of the increase came from just six categories:

Those categories are mostly one-time purchases or closely linked to re-opening.  The pricing effects will fade.

Yeah, but commodities!  Oil is going to the moon!

But if we back up that timeline to June 2019, we’re basically back to PC (pre-COVID) levels.

Let’s take that a step further.  We aren’t anywhere closer to the peak leading up to the financial crisis ($146/barrel).  Other than basic supply and demand, I don’t know a thing about what drives commodity prices.  But oil was north of $100/barrel from 2011-2014 and we never had an inflation problem.

The Fed believes inflation is transitory, while un/underemployment is long-term.  Hypothetical inflation vs actual joblessness.  You might believe we have an inflation problem, but we actually do have a labor problem.

Here’s the thing – it almost doesn’t matter who is right or wrong on the inflation argument as long as the Fed is controlling the bond market.  If the Fed believes inflation is transitory, it will base its decisions on that belief, and yields will follow.

FOMC – Not All Dots Are Created Equal

The Fed meets again this week, with the announcement and press conference coming Wednesday afternoon.  I hope Jay Money Powell is wearing the t-shirt we sent him that reads, “We’re not hiking!”

Since then, data has generally come out stronger than expected with inflation readings higher than expected.  That doesn’t mean the Fed will change its tune, but it will likely need to acknowledge the strength otherwise it risks losing credibility.

Expect headlines after the meeting to read, “Fed expects stronger growth and higher inflation”.  The market has two hikes priced into 2023 (putting LIBOR around 0.63% at year-end).  Even if some of the individual dots shift forward slightly and changes the headline to read, “Fed forecasts first hike in 2023,” I’m not sure it matters.  Unless Powell gets replaced in February, his dot is the one that matters.  Not all dots are created equal.

The market has been piling into short positions on the 10T.  This isn’t surprising considering every piece of fan mail I get tells me I’m wrong about inflation and yields not going up.  Everyone thinks rates are going higher.

But…when inflation data doesn’t come out as high as expected, the market needs to adjust.  This leads to a short covering, and rates fall.  Bloomberg reported that on Wednesday, ahead of the CPI data, the market unwound the equivalent of $7B in 10T bonds.

“Without a fundamental catalyst, we think the declines in yields over the last couple of sessions have been driven largely by technicals, especially given the breadth of short duration positioning,” JPMorgan strategist Jay Barry.

We’ve been suggesting that 1.47% was the key technical level on the downside, so it will be interesting to see if the 10T jumps back up or continues lower.

Low-end of the range: the next stop lower is 1.38%-ish. Beyond that, 1.0% is unlikely but can’t be taken off the table completely.

There were some headlines made last week about a July 26th deadline for LIBOR.  For now, this will have almost no impact on anyone reading this newsletter.  It’s largely aimed at the biggest banks and how they make a market on derivative contracts.

That being said, regulators are ramping up efforts to compel markets to shift to SOFR.  Last week, the CFTC told brokers to stop using LIBOR by July 26th.  While technically the announcement isn’t a mandate, being “encouraged” by the governing body of derivative contracts amounts to the same.  The push is being labeled as a “SOFR first” policy.

The biggest challenge currently is the lack of a trusted forward curve.  Banks are basically using Eurodollar futures like they always have, and then charging the end user a basis premium to write, “SOFR” into the contract.  It’s the same methodology banks have used with Prime over the last two decades.   The ARRC has said it expects to release forward looking rates by the end of July.

Regulators are challenged with overcoming inertia.  On Friday, Treasury Secretary Yellen noted that banks simply are not moving fast enough and there is growing concern markets won’t be fully prepared to shift away from LIBOR by year end.  Regulators leaned on agency lenders to lead the charge with SOFR products this year and are now moving downstream to the biggest banks.

For what it’s worth, Freddie SOFR caps have been extremely smooth this year.  There’s a premium to LIBOR, but it’s a small percentage.  Perhaps more importantly, things have been painless on the logistics front.

This does not change the mid-2023 deadline for existing 1 month LIBOR contracts.  Again, this change is largely aimed at derivative desks at the biggest banks.  If JPM and Wells do a swap with each other, it should be in SOFR, not LIBOR.

Compounding the challenge is not everyone is moving to SOFR.  For example, Bank of America is largely shifting towards BSBY, a Bloomberg index.  Many regional banks are using Ameribor.  In a survey conducted by JPM on swaps, 41% of participants prefer using the Bloomberg index because it more closely mimics LIBOR, while 34% prefer SOFR.  When asked which index is more likely to be the dominant index in the next five years, 63% said SOFR.  SOFR first.

We often get asked, “Do you think there will end up being multiple rates in use in the future?”  At this point it looks like that will be the case.  For those still closing new LIBOR based loans, ensure the loan and hedge have the same replacement index and the transition should be smooth.  Or, avoid needing to transition by taking the SOFR option if you’re given one.  If you’re not sure what the difference between the different SOFR rates is, check out our SOFR Flow Chart here.

All of these challenges come while SOFR comfortably rests at 0.01%.  Can you imagine how much harder this would be if we were in the midst of a tightening cycle?

But everything takes a backseat to the FOMC meeting.