In the 2009 draft, the Eagles selected Jeremy Maclin and LeSean McCoy in the first two rounds (in the incorrect order it turned out), reshaping the offense for years to come until Chip Kelly came in and blew it all up.  After those two picks, however, pretty slim pickings for the Iggles.

But what I remember most about that draft was the NY football Jets trading up to take Mark Sanchez with the 5th pick.  Creepy foot fetish guy and occasional coach Rex Ryan said at the time, “Guys were coming out of the woodwork to run routes for him. He’s got that kind of leadership. We saw the great feet.”  Yeah, he actually said that about his feet.

During his only season as a starter in college, Sanchez first had to fight off two other QB’s to even land the starting gig.  He went on to put up good but inconsistent numbers.  He was generally considered a second or third round pick over most of the season.  Even his own coach, Pete “I only abandon ship right before it sinks” Carroll was not only surprised that Sanchez declared for the draft, but publicly said he disagreed with the decision.

But 2009 was a particularly weak QB class.  Matthew Stafford went #1 overall, but after that it was Sanchez, Josh Freeman, Pat White, Stephen McGee, Rhett Bomar, Nate Davis, and several more guys I don’t remember.  Heck, I probably could have gone in the 6th round that year.

But the real reason Sanchez went 5th overall was because he absolutely shredded the Penn State Nittany Lions in the Rose Bowl.  Penn State was 1 point away from a perfect season that year.  You probably remember the Tim Tebows beating the Sooners in the national championship game, but I remember going into the Rose Bowl furious that we had been that close to playing for a title.  It didn’t take long to disabuse me of those illusions.

The first quarter ended in a 7-7 tie, but then Sanchez went off.  The Trojans scored 24 unanswered points in the second quarter and never looked back.  Sanchez finished 28-35 for 413 yards, four TD’s, and no INT’s, setting several Rose Bowl passing records along the way.  And he intelligently declared for the draft to take advantage of the momentum.  Rex Ryan failed to appreciate how terrible the PSU secondary was that year and he overpaid for Sanchez.  And yet somehow Sanchez was still in the league up until a few weeks ago when he tested positive for a performance enhancing drug.  He’s suspended for a hypothetical four games if a team ever signs him again, but last I checked Rex Ryan isn’t in a position to sign anyone.  Sanchez is done.

But the real reason I remember that draft is because I spent the weekend crafting an email that went out Monday morning at exactly 7:50am.  I picked that time because I figured it wouldn’t get lost in the shuffle of all the other emails people get through out the day.  I had even less creativity then than I do today, so I simply called it the “Pensford Letter”.

Pensford was born that day 9 years ago.  And I sincerely thank everyone that has helped us stick around just a few weeks longer than Mark Sanchez.

The next Fed rate decision comes Wednesday.  This is an “off” meeting, meaning no updated forecasts (blue dots) and no Q&A afterward by Powell.  During this tightening cycle, hikes have not come at these meetings and we expect the same this week.

Over the last month, futures markets have placed about a 25% chance of a hike, but that is now up to 34%.  We think that’s too high, but it illustrates the rising expectations of an additional hike.  It also means the market is starting to price in the probability of hikes coming at “off” meetings in the future.

We started the year with both the Fed and the market projecting three hikes.  We had one in March already, so the Fed would need to hike at each of the remaining “on” meetings to get four hikes in instead of three. Current probabilities for hikes at the “on” meetings:

As we have been expressing recently, we view the debate over a fourth hike in 2018 as largely a psychological event.  If the Fed is intent on pushing Fed Funds to at least 2.50%, does it really matter whether we get there in December or March?

But the market may interpret it as a hawkish signal and increase the odds that the Fed will surprise to the upside in 2019 and beyond.  If the Fed wants to avoid this, it may need to ramp up the Fed-speak or blue dot forecasts to flatten the future curves.  In other words, a fourth hike in 2018 is simply pulling forward a hike from 2019 and the landing spot is still the same.

So what do we expect at this week’s meeting?

Bottom line – minimal changes to the current plans.  With the potential for a trade war and the impact of tax cuts just starting to hit the system, the Fed doesn’t have a lot of incentive to change policy direction at this meeting.  But the Fed-speak between now and the June 13th meeting will be closely monitored.

With the increasing chatter about an additional hike this year, a key determinant will be the rise of inflation and the Fed’s tolerance to overshoot the targeted 2.0%.  For purposes of this discussion, let’s assume inflation keeps climbing.  If it doesn’t, then the Fed will likely need to slow the pace of hikes anyway (we think this is a very real potential outcome).

Current Policy
If the Fed believes inflation should be at exactly 2.0% and no higher or lower, it would increase the odds of more hikes assuming inflation keeps climbing.

The goal is to slow the climb and gently (hopefully) arrive at 2.0% without overshooting.  Historically, this has been the Fed’s approach.

Price Targeting
This approach has been called inflation targeting with memory.  Large overshoots or undershoots of inflation (like the recent 5+ year run sub 2.0%) are factored into monetary policy.  In a situation like this one, the Fed would allow inflation to exceed 2.0% for some amount of time in order to make up for the undershoot.

The Fed doesn’t necessarily have to switch to this approach permanently, it could site the recent undershoot as the type of shock that warrants a temporary shift in policy.  But either way, a shift would lead to a lot of questions.

If the Fed believes inflation should run hot for a short amount of time, how long exactly would that be?  And how high above 2% could inflation run before the Fed intervenes aggressively?

Last week we noted that Chicago Fed President Evans noted that inflation at 2.25% would not present a problem.  Is that view consensus behind closed doors?

Given sluggish wage growth, we view a run up to 2.25% in Core PCE as something that won’t happen any time soon.  This gives the Fed plenty of runway to monitor developments, but how does it handle rate hikes along the way?

How does the Fed juggle a new, lower neutral rate of 2.50% with price targeting?

Price targeting in the current environment suggests a slower path of rate hikes to allow inflation to overshoot, but will Powell be comfortable with this risk if unemployment is sub-4.0%?

Does the Fed believe inflation must overshoot 2% in order to make that long term goal more sustainable?

Like we said, a shift would raise a lot of questions.

Ben Bernanke is not a fan of this approach.

“In this context, raising the inflation objective would likely entail much greater costs than benefits. Inflation would be higher and probably more volatile under such a policy, undermining confidence and the ability of firms and households to make longer-term plans, while squandering the Fed’s hard-won inflation credibility. Inflation expectations would also likely become significantly less stable, and risk premiums in asset markets — including inflation risk premiums — would rise. The combination of increased uncertainty for households and businesses, higher risk premiums in financial markets, and the potential for destabilizing movements in commodity and currency markets would likely overwhelm any benefits arising from this strategy.”

Bernanke has recently indicated that a temporary shift to price targeting would be worth exploring, but he is opposed to a permanent shift.

Our best guess is that the Fed is intrigued by this idea, but not willing to announce a formal shift in policy.

Fed: “If inflation happens to overshoot 2% for a while, it’s probably ok since there was such a protracted undershoot.  We aren’t trying to push inflation over 2%, but we could live with it for a while.”

There are too many factors applying upward pressure on yields for quasi-dovish ECB language to keep rates down for long.  That being said, if the lid is firmly on the Bund at 0.60%, it will be tough for the T10 to break materially higher.

10 Year Treasury Net Shorts/Longs
The market’s conviction that yields are destined to move higher is best expressed in the massive net short position in 10yr rates.  The graph below illustrates now short the market is (grey bars are net short/long contracts) relative to the Treasury yield.

The market is basically as short as it was post-election, but the starting point for the T10 is much higher.  There is a slight lag with reporting of the contracts, so the most recent showed the T10 at 2.95%, but clearly 3.00% is on the horizon.

We also wrote last week that we did not expect a short squeeze to bring yields back down like we saw spring 2017 because of all the underlying reasons that justify higher yields.  Traders aren’t willing to throw in the towel unless something like a trade war really heats up. 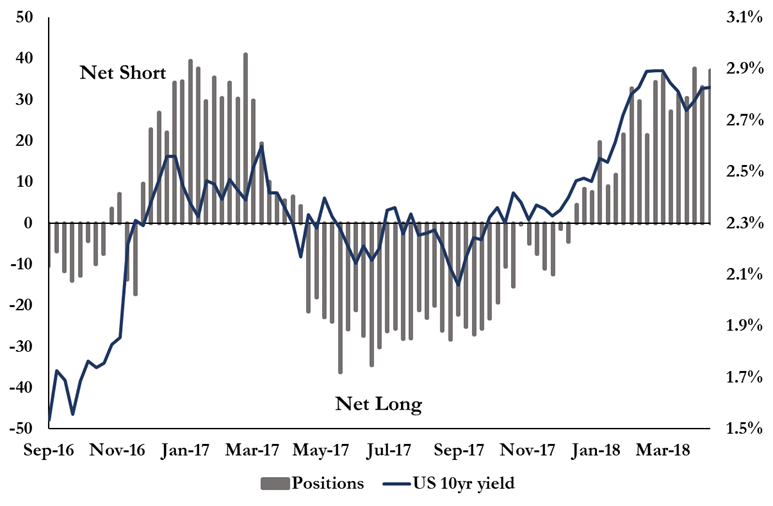 Real Money Accounts are investors and asset holders – think pension funds.  They buy and sell bonds as an asset class.

The gap closed last year after speculators threw in the towel once the Trump-mania died down.  The resulting short squeeze helped force the T10 all the way back down to 2.00%.

The divide is widening again – will the Real Money Accounts be proven right again?  Will the T10 be pushed back down to 2.62%?  Or even lower?

We think rates are headed higher and the T10 could test 3.25% in the coming months.  Just a few of the contributing factors:

It’s going to be a busy week.  I am celebrating Pensford’s birthday by getting a root canal.  Probably won’t effect markets, but you never know.

But seriously, this week is nuts.

Wednesday – Fed meeting.  As we explained above, we think this will be a non-event but all FOMC meetings this year will carry more risk than previous years.

There’s also a ton of important releases between each of those, so volatility should be high and we could see rates swing wildly.