The Agencies continue to lead the way on the transition from LIBOR to SOFR.  We are starting to receive apps referencing SOFR, which leads to the obvious question, “Can I buy a SOFR-based cap?”

Several banks are hopeful they will be in a position by month end, but you could not call an Agency-approved Cap Provider today and buy a SOFR cap.  SOFR hedging volume is basically non-existent right now.

Don’t worry, it’s not the end of the world.  Regulators are transitioning to SOFR to improve markets, not to upend them.   If a SOFR cap is unavailable at commercially reasonable prices, Freddie will allow a LIBOR cap to satisfy the hedging requirement until a SOFR cap can be purchased.1

Furthermore, I think there’s a chance that an Agency-approved Cap Provider may see an opportunity to be the only one offering SOFR caps.  The Cap Confirm will say SOFR, but they will hedge it the way they hedge LIBOR caps.  That’s how banks offer hedges on Prime – the documents say Prime, but the trading desk uses Eurodollar futures to hedge it just like a LIBOR hedge.  The end-user never knows the difference, but the trading desk is retaining the basis risk that the correlation between LIBOR and Prime breaks down.  They charge extra for this risk, but at least the customer can get a Prime hedge.

Even if the trading desk can’t hedge it yet, front end rates and volatility are so low that the risk of a 3.50%-ish strike is negligible.  What are the odds over the next 36 months that a trader has to pay out on a SOFR cap with a strike in the mid-3.0%’s?  I think some Cap Providers may say, “Just sell it and we’ll hold the risk.”  It’s what I would be doing if I was running a desk.

They make $20k instead of $10k and have almost no risk of SOFR exceeding the strike.  In fact, the SOFR forward curve (here’s a link to the SOFR forward curve we publish every morning) projects negative SOFR in 2022 and 2023.  If you’re a trader, are you losing sleep that a 3.50% strike might blow up on you over the next three years?   Or do you sell the cap and just charge extra for the unknown?

Whether a Cap Provider uses SOFR to hedge its position or Eurodollar futures, the result will be a higher cap cost until liquidity improves in the SOFR market.  Although that premium is likely 50%-100%, the high strike requirement and low rate environment means that premium is pretty manageable.  Consider a three year, $50mm cap with a 3.50% strike.

Sure, you pay an extra $8k, but is that really a deal killer? A year ago, that same LIBOR cap would have cost $50k.

You’ll note that I used a typical max strike rate in that example.  Lots of borrowers have been buying much lower strikes recently.  I don’t think that will be economically attractive using SOFR in the near term because the risk to the trader goes up substantially.  It’s one thing to retain risk when the strike is 3.50%.  It’s another when the strike is 0.50%.

Bottom Line – the Agencies are mandated to provide liquidity in the US housing market.  Think about how critical that mandate is during the worst economic contraction in the history of the country, particularly one that is impacting renters more severely than homeowners.

They are likely shouldering a level of burden unseen before.  How far down the list of priorities is, “force borrowers to buy SOFR hedges even if it disrupts markets?”  They are in the business of improving markets, not disrupting them.  They have bigger fish to fry and will be doing everything in their power to ensure this particular aspect of the financing goes as smoothly as possible.

When it’s time to buy a cap, we’ll help you compare the two options:  SOFR with a premium vs LIBOR with higher escrow and replacement costs in the future.  But the difference will be minor and the fact that you can get a loan at all right now is far more important.

The economy added 1.76mm jobs last month, while the unemployment rate dropped to 10.2%.  The economy has regained about 9mm of the 21mm lost.

It’s tough to celebrate the bounce when we are coming out of the worst trough ever.  Look at this graph BNP put together on how much worse this cycle has been than previous cycles. 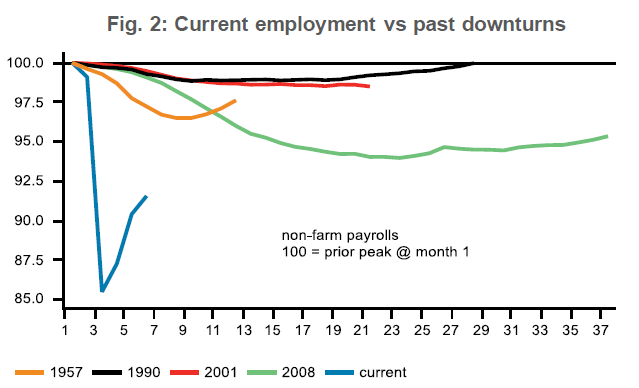 Just as importantly, the number of permanent job losses is mounting, up to 1.6mm.  That puts this on par with the worst period of the financial crisis.  In July, 24% of all job losses were permanent, while in June this was 21%.  In April, it was 10%.  Here’s a graph 538 put together using the BLS data.

Anxiety about jobs also seems to be increasing.  The number of people reporting fear of someone in their household losing a job has increased from 32% to 35% since May.

Keep in mind all of this has occurred with an unprecedented level of federal stimulus and intervention.  How much worse could it have been?  More importantly, how much worse could it become if Congress doesn’t pass another round of stimulus immediately?  If you want to order businesses closed for public health reasons, be prepared to stand in for lost income/wages.

Stimulus.  That is all.

Actually, that’s not entirely true.  We have a ton of economic date due out, I’m just not sure how much significance it carries right now.  Inflation, retail sales, and consumer sentiment lead the way.  Plus, escalating tensions with China.