Pfizer’s news was just the good news we needed in the face of surging cases.  Markets and rates spiked, and understandably so.

Early indications are that the vaccine is nearly 95% effective.  Annual flu shot effectiveness?  About 50%.  And that’s pretty normal.  In fact, only chickenpox and measles vaccinations have effectiveness > 90%.

“I’ve been in vaccine development for 35 years,” William Gruber, Pfizer’s senior vice president of vaccine clinical research and development. “I’ve seen some really good things. This is extraordinary.”  He wasn’t just tooting his own horn, either.

“If that headline number really holds up, that is huge. That is much better than I was expecting and it will make a huge difference,” said Ashish Jha, the dean of the School of Public Health at Brown University.

The vaccine is different than a season flu shot because it uses mRNA, or messenger RNA, technology.  Rather than injecting a dead version of the virus, it injects instructions for the body’s immune system.  The FDA has not approved an mRNA vaccine before now.

Pfizer hopes to manufacture about 50mm doses before year end, and about 1.3B next year.  A successful vaccination requires two doses, 3 weeks apart, so that would potentially vaccinate 650mm people next year.  Plus, Moderna is utilizing a similar approach and is expected to announce results in the next week or so.

There’s a very real chance that more than one billion people could be vaccinated in 2021.  Fauci estimates that most Americans will have access to a vaccine around April.

There are, however, some initial questions and concerns:

It seems unlikely that any of those are deal killers.  Overall, this news is resoundingly positive.  BofA noted that equities had their single largest weekly inflow.  Ever. 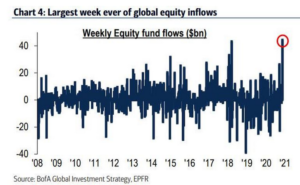 So why am I wondering if it’s pfalse hope?

We are heading toward another shut down.

The US had 184k new cases on Friday. Compare that to the mid-September low of 34k.  NYC and Chicago are tightening restrictions again.  Governors like our own are reversing course on re-openings.  Europe is shutting down again.

NY Governor Cuomo made a name for himself early on in the pandemic by conducting daily press briefings, with some cynics (not me) wondering how his sensationalism might be contributing to the problem.  How does he not tighten restrictions?  That’s his thing, right?  He was very proud of New York’s progress as an early mover, why would it be different this time around?  While we’re on the topic, did he ever get those 33,000 ventilators? 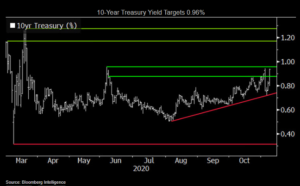 Put me in the camp of it being more likely to see us test the low-end range of 0.73%.  Surging cases, tightening restrictions, expiration of eviction moratoriums, growing delinquencies, lack of stimulus progress, etc.

While the Pfizer news is fantastic, I think the knee jerk reaction by the market last week will be gradually offset by the reality that we are still in an economic quagmire.

Plus, global negative yielding debt is back at an all-time high.  When $17T of the bonds in the world have a negative yield, how great does our own 10 Year Treasury look at 0.90%?  Money flows in and the 10T yield comes back down.

Even if the 10T doesn’t trend back down, I’m not sure how it continues up to 1.25% right now.  It just feels premature.

If we asked 100 people, “who should get the vaccine first?”, I bet nearly everyone would say healthcare workers and the elderly, right?

That means we have concluded that different groups have different risks.  Seems pretty intuitive, right?

Then why are we still using blunt restrictions to target an issue that requires precision?

I think politicians will react inappropriately once again, believing something is better than nothing, even if that something hasn’t proven effective in the past.  I eagerly await the day a vaccine strips politicians of the ability to force ineffective policies on the economy.

Lots of second tier economic data, like retail sales and housing starts.  Obviously, vaccine and election news will be the market movers.