Powell Decides Where the Fed Vacations

We spent several days there last week for a volleyball tournament and I don’t know how or why families would visit those amusement parks.  We had biblical thunderstorms every afternoon, it was approximately 117°, and the humidity was unbearable.  And we were indoors.  Traffic was shockingly bad at 9pm, and those families had just endured a 12 hour day in those conditions.  I don’t know how they do it.  Our eldest son noted, “Maybe Florida Man is Florida Man because of the humidity.  It’s not really his fault.”

I had no counterpoint, but I think it’s safe to say that we won’t be vacationing at Disney World anytime soon.

Last month’s job report was mildly disappointing, coming in at 559k.  The month before that was 278k.  The consensus forecast for June is a gain of 700k.

My gut is that there is a greater likelihood of undershooting than overshooting this estimate.  Connecting employers with employees is a disjointed process that takes time.  Furthermore, the states that pulled back enhanced unemployment probably haven’t hit the stats yet.  This will reduce unemployment for about 4mm Americans, while totally eliminating benefits for about 2mm – pretty strong incentive to go get a job.

BNP projects much of the same, with robust numbers of 750k+ from July through October.  By the time we hit January ’22, all but 1mm of the displaced workers will have found work again and the unemployment rate could be back to 4.5%.   BNP also believes the Fed will likely hold off on tapering until Q1 2022 – why rush it? 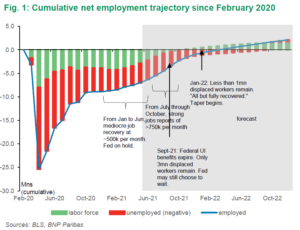 Powell has sent enough signals to know that he views the labor market as the key determinant for changes to accommodation.  He believes he can cut off inflation with the snap of a finger, but doesn’t have the same control over job creation.

It will take a shockingly strong number to pull forward expectations for tapering…and then we need to exceed expectations next month, too.  Barring that, there’s no reason for the Fed to start talking up Q4 tapering.  What’s the rush?  Give it a few more months to make sure everything is ok and then announce tapering at Jackson Hold or the September meeting.

Either way, I don’t expect another Taper Tantrum this time around.  Everyone knows it’s coming.  Whether the Fed begins tapering in Q4 of this year or Q1 of next year, what’s the big deal?

Jobs, not growth or inflation, will be the key driver of Fed accommodation policy.  That means more volatility around labor data even if I believe the ultimate outcome is little changed.

The Fed was more hawkish than expected at its last meeting, but does it really matter?

Let’s say our family of seven anonymously publishes our desired summer vacation spot.  Our five kids vote to take a vacation to Disney World, while the wife and I vote for Outer Banks.  The “median” dot plot suggests we are going to Orlando.  But I can tell you there is a less than 0% chance of that happening because the only dot that matters is my wife’s.  Mine is a nice to have, like the Vice Chairman falling in line.  But it really doesn’t matter.

Same thing with the Fed.  Who cares if some anonymous member thinks the Fed will hike late 2022?  Do they carry any weight at the Fed?  Do they even have a vote?  We have no way to know.  And because they are anonymous, they have no downside to making outlier forecasts.

But we know what Powell thinks.  And, like my wife, Powell is in charge.  If Powell wants the Fed to vacation at the Outer Banks, guess what?  The Fed is going to the Outer Banks.

Let’s assume the Fed starts hiking in Q4 2022, more than a year ahead of their current indications.  Then what?  Do they hike every six weeks in perpetuity?  No.  Here are a few potential scenarios, none of which will actually play out but that highlight the general concept of, “What’s the Big Deal?”

Dots – Fed does what it says it will and is basically on hold through 2023.

Market – expects a hike in late 2022, then a gradual pace of hikes

FAIT – don’t forget, the Fed is committed to a new strategy of averaging 2.0% inflation.

The general takeaway is that most outcomes, even if the Fed hikes sooner than expected, put floating rates around 1.35% in 30 months.  If your deal doesn’t pencil if rates move up 1.0%, you might be overextended.  There are some junk bonds you could invest in instead…

The Fed has done an admirable job of tightening the band of outcomes and we spend a lot of time debating about which outcome is most likely, but does it really matter if LIBOR is 0.25% or 0.75% or 1.25% 30 months from now?

The 10T didn’t pop on news of an infrastructure bill because it won’t be funded through Treasury issuance.  Sure, it will help GDP but as we’ve been repeatedly reminding everyone, volatile swings are the result of inflation fears, not economic growth.

Big news will be Friday’s job report.  NY Fed President John Williams has a speech on Monday, and he is likely to reiterate Powell’s take that inflation is transitory.  Remember, not all dots are created equal, and the NY Fed is basically second in line behind Powell.