Powell is Woke, Brexit for Dummies, and 10T Technical Analysis

Apparently I am partially woke.  If, like me, you didn’t know what that meant, it probably means you aren’t fully woke, either.

It’s an awareness of social issues.  My kids pointed it out to me after I had made a joke about (insert your family’s sensitive topic here).  While some things might be off limits, I enjoy jokes about sacred cow topics.  Sometimes we take ourselves too seriously, and my daughter (who wants to major in Activism when she goes to college) takes these things very seriously.

So I made a hysterically clever joke (you’ll have to take my word for it) and she said, “Dad, you can’t say that!”  We debated for a few minutes and the topic of being woke came up.  My definitive conclusion was that I am fully woke.  She disagreed.  “Woke dads wouldn’t make that joke.”

I countered, “In a way, it would be less woke to not make that joke.”    Apparently, humor is a major hurdle to achieving full wokeness.  My loss.

This newsletter is a long one, but should address a lot of questions we have been fielding lately.  So long, in fact, that some of you may find yourselves completely unwoke by the end of it.

Brexit fears and a marginally dovish Powell helped drive 10T yields down to that key resistance level of 3.06%.   Those are the sort of things we read in headlines and then can measure the impact on rates.

But from a purely technical aspect, rates are likely to rebound.   That’s tough to say with the threat of Brexit uncertainty, Italian debt mess, China trade war, government shut down, Mueller investigation, etc all hanging over the market.  But the underlying US economy is still strong and those headwinds are more likely to serve as a lid on rates rather than driving the T10 below 3.00%.

Check out the bottom right hand of this BNP Paribas graph – last week’s drop in rates likely resulted in a dramatically overbought situation.  That sort of swing usually experiences a reversal – hence our expectation that rates could rebound this week absent further bad news. 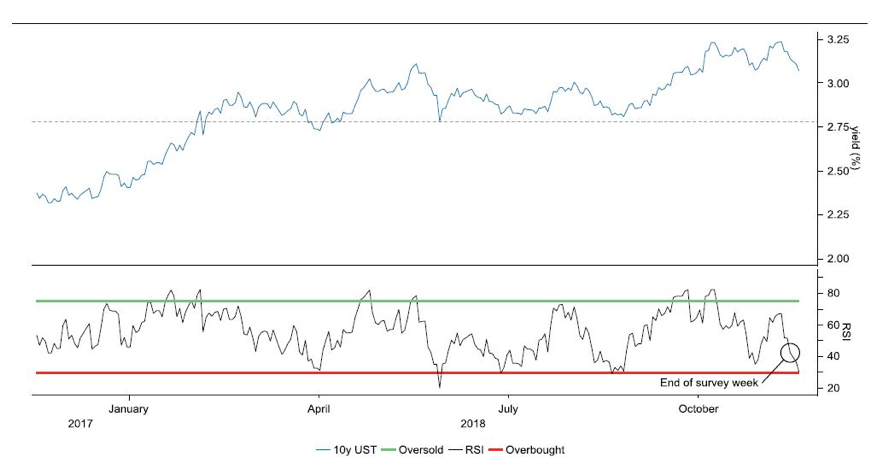 That same report noted a few other key takeaways:

– despite the drop in rates, net shorts actually increased across the curve

DoubleLine’s Jeff Gundlach also noted that Treasury yields are likely to rise because of rising foreign hedging costs.  As the US decouples further, rising rates and a strengthening dollar make it more expensive for foreign buyers to hedge the currency component of buying Treasurys.

In his graph below, he shows the yield on the 10T unhedged (3.00%) vs hedged into Yen and Euros.  The yield drops from 3% to negative territory as a result of the differential between the Fed and ECB/BOJ.

Gundlach says that explains why foreign holdings of US Treasurys have dropped to 36%, the lowest in a decade

– China is still the biggest foreign holder of Treasurys at $1.15T

– Japan is the second biggest holder of Treasurys at $1.02T

– foreigners also sold $16.9B of US stocks last month, the fifth consecutive month of selling

In other words, foreigners are dumping US stocks and bonds as Trump pursues aggressive tariff policies.

Bottom line – lots of technical factors applying upward pressure on yields.  Traditional macro factors could win out, but be aware that the bias if for higher rates.

British PM Teresa May’s administration has been hard at work negotiating the UK’s formal exit from the EU.  Brexit dominated the headlines last week because May presented the terms of the deal to Parliament and reactions were mixed to say the least.

We’ll focus on the economic aspects.

The deal will be voted on by the European Commission on 11/26.  Assuming it passes, it will go to Parliament for the final vote – likely sometime in early December.  This uncertainty isn’t going away anytime soon.

Passporting Rights – as an EU nation, UK companies can set up shop in EU countries without establishing separate subsidiaries within each nation.  This is like a New York company opening an office in California.  With Brexit, the UK loses this right.

Equivalence – Passporting Rights will be replaced with Equivalence, a watered down version of Passporting Rights.  The deal as currently written gives the financial sector (banks) basic access to EU nations on a case by case basis.  The European Commission unilaterally decides whether the UK company’s standards are close enough to EU standards to allow them to operate in that country.  These rights can also be unilaterally revoked by the EU with just 30 days notice.  If you’re a UK bank, are you running out to set up shop in an EU nation knowing you could lose your rights to operate there with just a month notice?  The Financial Conduct Authority (FCA – these are guys that gained attention a year ago by commenting about LIBOR) projects UK banks stand to lose $12B if passporting rights are lost.

No Confidence – May can be forced out by her own party through a vote of no confidence.  This is first triggered by at least 48 letters of no confidence.  If that happens, a secret ballot is cast by all members of the Conservative Party.  If more than 50% vote against her, she is forced to resign and the process of identifying the new leader begins (in UK the majority party appoints the PM, not a public vote).

May’s party comprises 316 votes in Parliament, but she needs 320 votes to pass the bill.  That means she needs four additional votes, which is especially challenging given the lack of support in her own party.  Surprise resignations and calls for vote of no confidence guarantee May can’t count on every member to vote her way.

The Guardian projects about 250 MP’s (Member of Parliament) will definitely fall in line with May.  That means she’s still short by about 70 votes.  Unfortunately for May, those holdouts are considered “Hard Brexit” and don’t want a deal at all with the EU.  They fear a deal of this type is basically UE-lite and represents the worst of both worlds.

May will need to rely on the opposition party for votes.  Can you imagine Republicans and Democrats working together right now? And the real issue here is that the Labour Party (spelled with a “u”, which makes it fancy) doesn’t want a Brexit at all.  Their starting point is really “Does this deal ensure everything stays exactly the same?”  Kind of defeats the purpose of Brexit in the first place.

So how does May get the votes?  Easy – because the fallback is a No Deal Brexit.  Not voting for May’s deal is the same as voting for No Deal.

No Deal Brexit would end all ties with the EU immediately at the March 29, 2019 deadline.  Logistically, the list of complaints is long.  For example, no traveling between countries without passports.  There’s no infrastructure for this right now – Eurostar will halt or slow down dramatically.  Same for flights.  Smaller issues like cell phone roaming.  Driver’s licenses.  Think about how much more complex our lives would become overnight if we couldn’t travel between states freely.

The lack of consensus and the Ghostbuster prophecy of chaos is why the market reacted the way it did last week – uncertainty.

Perhaps both sides can agree to an extension of sorts, but May’s PR team is really ramping up the downside of No Deal Brexit in order to scare up support for her deal.

If Parliament doesn’t approve the deal in December, the odds of a deal before the deadline in March plummet and the market fears of chaos could be realized.

On Wednesday, Jay Powell laid out three potential headwinds in 2019:

“These are things we are well aware of,” he said at the Dallas Fed presentation.

The front end dropped more than 10bps.  Powell has been so consistently optimistic and hawkish that even this relatively mild commentary sent the market scrambling.  Odds of a hike on December 15th dropped to 65%.  This probability was comfortably in the 80%’s just a month ago.

We believe this is an overreaction to Powell’s comments, but perhaps also finally an acknowledgement that the Fed may not hike as much as expected next year.  We’ve believed for some time that the Fed would begin struggling as we approach neutral (2.75%-ish), so Powell is really just addressing the reality of the situation.

But Powell hasn’t turned full dove.  Just six weeks ago, Powell said we were “a long way” from neutral.  Let’s not overreact to a few comments about headwinds.  He has been consistently upbeat on the economy, worried about 3.6% unemployment causing an overheating, inflation creeping up, etc.

The Fed will still hike in December, so 65% is too low.  But does it really matter?  The market cares far more about the future path of LIBOR than whether the Fed hikes next month.

Ask yourself this – would the market prefer a hike next month with a promise not to hike again for three years?  Or no hike but a promise to hike four times in 2019?  Those are extreme examples to illustrate the point, but the takeaway should be that Powell’s focus will be more on the path and pace of rate hikes.  He’s going to squeeze one more in December in case all those headwinds come to fruition sooner rather than later.

Goldman projects four hikes next year.  The FOMC projects three.  The market (and me personally) expect one to two hikes.  The forward curve is down to 0.38% of increases next year.

On the topic of neutral rates, on Friday Vice Chair Clarida said, “Currently the policy rate is below that range but as you can tell, it is getting closer toward the vicinity of that range”. Sounds like some in the Fed are starting to acknowledge the tightening cycle is coming to an end.

Lastly, while Powell’s comments revealed his wokeness, he notably failed to mention an inverted yield curve as a headwind.

That tells me he is just partially woke, not fully woke.  I wonder what Powell’s best joke about (insert insensitive topic here) would be?